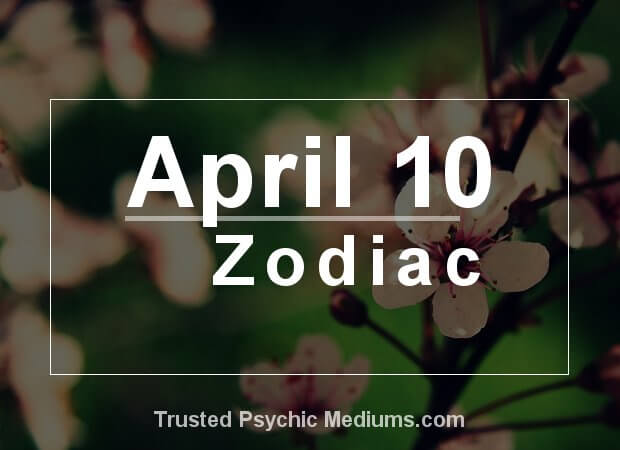 What is your Zodiac Sign if you were born on April 10?

If you are born on the 10th of April, your Zodiac sign is Aries.

As an Aries person born on the 10th of April, you are a very ego-driven and optimistic person.

A lot of people would like to make fun of you because they think that you are essentially clueless regarding how the world works.

They would love to convince you that things are more complicated and difficult than they are. This is the reason they give themselves whenever taking options or whenever being decisive.

You, on the other hand, take action. Even if you don’t have much information, you take action and things usually turn out in your favor.

This drives a lot of your critics nuts because they can’t be the same thing.

Lovers born on April 10th are very easy to misunderstand. It’s as if everything that you say goes to some sort of weird decoding machine and leaves all the worst impressions.

It’s as if the more intent you are in showing your emotions, the more you are misunderstood.

You often get the exact opposite reaction of the response that you are looking for.  This is really puzzling for you and, in many cases, it poisons your romantic relationships.

The good news is that the older you get, the sooner you will free yourself of this very frustrating situation.

Those with a birthday on April 10th are best suited for jobs requiring very little thinking, but a lot of courage.

There are lots of jobs out there that don’t really require analysis, they just require decisiveness.

As long as you have a script in front of you, you will make the right call and you have the strength of character needed to make it a success. Just stick to this and you will be fine.

Unfortunately, you do have an impatient side and you often go off on a tangent and this can lead to all sorts of trouble.

Aries people born on April 10 have an inborn sense of action. They just can’t help it.

They just need to constantly do something. They feel that they’re not doing anything useful with their lives if they are not constantly in action.

While life does reward action, understand that you also have to invest a little bit of time in analysis.

By being a little bit more thoughtful, you’d be surprised as to how much more effective you could be in many different areas of your life.

Positive Traits of the April 10 Zodiac

You are a very decisive person. This is very interesting considering the fact that you often make moves even if you don’t have the full information.

If you want your decisions to yield better results, make sure that you do a little bit more research.

Negative Traits of the April 10 Zodiac

While people can and do respect your decisiveness, wrong decisions can be your undoing.

The particular aspect of Fire that is most manifested in the April 10 personality is fire’s inability to be intimidated.

That’s right, fire can’t get scared. Fire doesn’t back down.

Provided it has enough fuel, air and heat, fire will continue to rage until the item it’s burning is completely gone.

Your ability to make decisions and to charge ahead is reminiscent of these attributes of fire.

The particular aspect of Mars that is most manifested in your personality is your tendency to push forward and to continue until you’re done.

Now, of course, this doesn’t always work in your favor. Sometimes you run out of energy, sometimes you come across an immovable object.

Still, this ability to decide on the direction and push forward is admired by quite a number of people.

My Top Tips for Those with an April 10th Birthday

You should avoid people who will steer you in the wrong direction. These are people who are out to use you and abuse you.

You don’t want these people manipulating you.

You have a lot of power and decisiveness. Stick to people who are true allies.

The lucky color for those born on April 10 is Brown.

Brown is the color of the earth. Brown also has tremendous power because it is rooted in the earth and it draws its sustenance from the ground.

If you are able to ground your decisions on facts, you would become a much more powerful and successful person.

If Your Birthday Is 10th April, Never Do This

Although life moves fast for someone born on 10th April as an Aries, it’s vital that you recognise that other people don’t necessarily share your intensity, your ability to race ahead or your resilience to things getting in the way of your goals.

In other words, don’t fall prey to impatience, nor getting frustrated at other people for not seeing things from your perspective.

As an Aries, often it’s down to you to fly solo and be the pioneer in the kinds of places others fear to tread.

If you’re worried that sounds like a lonely existence, you needn’t be.

In fact, you’ll often find that those brave courses you char and those trails that you blaze alone will become avenues that others will follow you in, inspired by your natural leadership.

Be bold, be brave – but please don’t be impatient with other people!

Final Thought for the April 10 Zodiac

You have what it takes for ultimate success. The only thing that is missing is your willingness to take instruction and second guess that instruction.

While I’m not saying that you should doubt yourself, all I’m saying is that you should invest in a little bit more analysis to ensure that your decisions are the right ones