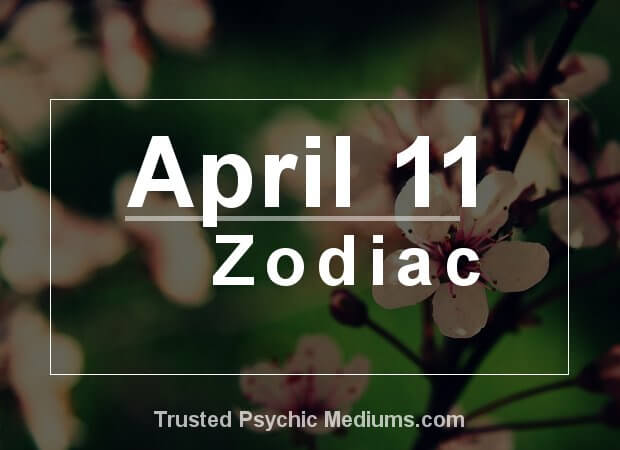 What is your Zodiac Sign if you were born on April 11?

If you are born on April 11th, your zodiac sign is Aries.

As an Aries person born on April 11, you are a very adventurous person. You believe that life is one open-ended action-adventure.

Accordingly, you have the drive, courageousness, and eye towards innovation that makes things happen for you.

To say that you attract people would be an understatement indeed, because most people find these traits admirable.

Life can be very boring. Life can even seem like it’s stuck. You destroy all of that because you are able to let people know that action is possible. You get people to open up to a world of possibility.

Unfortunately, this is not always welcome.

Lovers born on April 11 are very possessive. You really believe that people who are drawn to you are drawn only to you.

In other words, you don’t really leave much space for them to develop their own personality. You often don’t even recognize what kind of needs they may have.

Not surprisingly, your relationships tend to be one-sided.

While your relationships can last a long time, in many cases bad breakups would be the best things that would ever happen to you. Why?

They teach you despite all the pain that relationships are two-way streets, that they should serve the needs of both partners in the relationship.

You don’t like being stuck in a certain level in your company. It’s very easy for you to develop the feeling that you’re not going anywhere.

Not surprisingly, you often end up rebelling and making all sorts of moves just to steer things up.

While in some cases this pays off tremendously, in other cases it seems disruptive and you come off as a troublemaker.

People often gang up on you behind your back because you end up stepping on toes without you knowing it. You can be quite thoughtless.

Do yourself a big favor and look towards working with people as a collaboration.

While they would be sure to appreciate your tendency towards action and decisiveness, they would also respect the fact that you respect them enough to get their input.

Aries people born on April 11 have an inborn sense of adventure.

You feel that there is nothing impossible in life, and you just need to put in the right action and the right motivation and things will happen.

While for the most part this works out in your favor, there are certain big issues in your life that a little bit of decisiveness can’t fix.

You need other people. You need to consult with other people and build a consensus so things can happen. They sooner you realize this, the sooner you can take your life to the next level.

Positive Traits of the April 11 Zodiac

People born on April 11 are very active, courageous, and decisive people. They believe that action is everything. They are sick and tired to listening to empty talk.

You have to understand that while decisiveness and the willingness to take action are definitely more than welcome in many situations, in others it can be viewed as a threat.

In fact, in other situations it can be downright disruptive and destructive. Know the difference.

Negative Traits of the April 11 Zodiac

If there is any one thing that you have to improve on, it’s your tendency to reduce all the situations you find yourself in to black and white situations.

Stop the overkill and you would be able to achieve greater things with your life. Things aren’t as black and white as you make them out to be.

You have a burning intensity that is very easy to detect. People can feed off of it. People can also try to resist it because in many cases, it threatens them.

Do yourself a favor and adapt another aspect of fire: fire as a sustainer, fire as an enabler of creativity and collaboration.

Just like all Aries people driven by Mars, you often find yourself in a confrontational situation.

While for the most part you come out on the winning end, this is no way to move forward in all areas of your life. A little bit of collaboration can go a long way.

My Top Tips for Those with an April 11th Birthday

If you’re born on April 11th, you should avoid taking action just for action’s sake.

Just because you’re bored doesn’t necessarily mean that the solution that you see for yourself is the right one.

The solution actually can often easily be found by simply talking with people around you.

You have to remember that your actions impact not just yourself but the people who surround you.

The time you pay attention to them is the time you step into their shoes and look at the situation from their perspective.

If you’re able to do this, you’d be able to make better moves that would make you look like a real leader instead of just a decisive jerk.

Lucky Color for the April 11 Zodiac

The lucky color for people born on the 11th of April is bright green.

Bright green is very, very optimistic. It can bring out a lot of positivity in others. It can definitely bring out a creative consensus.

However, it only works if others are involved. On its own, it’s too dilute to do much of anything.

Lucky Numbers for the April 11 Zodiac

People With the 11th April Zodiac Always Make This Mistake

Being born on 11th April makes yo a bold and vibrant person, but you’re also one who tends to trust a little too easily.

Due to your own tell it like it is outlook and overall honesty, you can sometimes forget, through no fault of your own, that other people are a bit more cunning at times.

As such, there’s often a tale or two to tell as you grow about your giving your all to someone, only to have your emotions, resources, time and energy taken advantage of.

This can be some backbiting gossip, some infidelity, a cheating business deal gone awry, or worse – although sometimes it’s just trivial stuff from people with bad intentions.

Adding a dash of healthy cynicism, or at least finding the means within yourself to question the motivations of others who seem almost suspiciously keen to help you, works wonders here.

Don’t lose your own earnest nature in the process though, not second guess everyone – just learn to trust your instincts a touch more.

Final Thought for the April 11 Zodiac

As an Aries person born on April 11, you need to do yourself a big favor and learn how to listen to others.

Now, this might seem a little bit threatening to you because you already have some sort of preset conception of how the world works, but you need to overcome this tendency towards stubbornness.

By being a little bit more flexible and open to feedback, you would be able to focus on the right projects and produce better results.