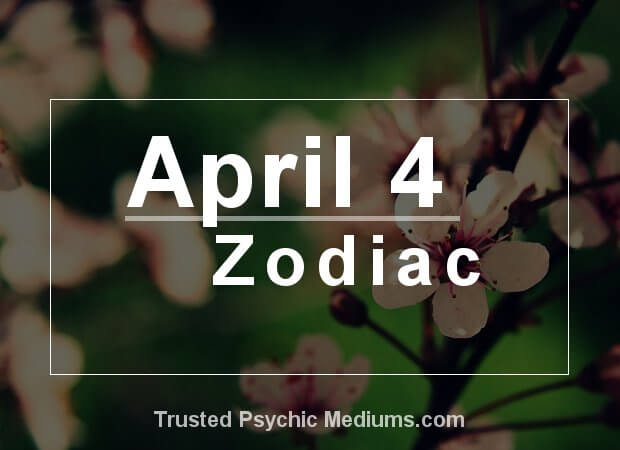 What is your Zodiac Sign if you were born on April 4?

If you are born on April 4th, your Zodiac sign is Aries.

As an Aries person born on this day, you are a very easy to misunderstand person. Seriously.

To many people, you come off as a very active, courageous, energetic and enterprising person. They love your spontaneity.

They like the fact that you don’t walk on eggshells and you call things out. You don’t care who you’re dealing with. Wrong is wrong and right is right.

On the other side of the equation, you can easily be viewed as ego-driven, proud, and, in many cases, dangerously impatient.

The interesting thing is that both sets of these observations are absolutely correct.

It really all depends on the perspective people take of you.

It’s easy to see why members of the opposite gender can’t help but fall in love with you because you’re very spontaneous. Everybody else is boring, predictable and, in many cases, lifeless.

You are a larger than life person to them. It’s not hard for you to stand out from the competition.

The problem is, once you’re in the relationship, it’s too easy for you to be overbearing and try to whip your partner into shape. Put simply, you are trying to remake that person into who you want that person to be.

You’re not exactly a very accepting person, at least not in the beginning. It takes quite a bit of patience and maturity to put up with you.

The good news is, after enough years, you will finally calm down and be a more accepting person.

The bad news is, most people really don’t want to wait.

Most people would rather take their chances with other romantic partners.

Those with a birthday on April 4 are best suited for military careers.

You don’t really care about details. All you care about is that action is involved.

Whenever you are given orders, you make sure that you will do whatever it takes, for however long it takes, to get the job done.

You’re very big on putting on a good show. The bigger the impact, the better you feel.

When you make a decision, it’s as if previous decisions don’t really matter all that much. What matters is that you made the decision.

Now, let’s not kid ourselves. You’re not exactly the sharpest tool in the shed.

You’re not exactly the smartest person in the rooms you find yourself in, but people don’t care. They are just drawn in by your sense of possibility, your decisiveness and your eagerness to take action.

They’re sick and tired of people who just wait around and constantly weigh both sides of the equation without getting around to doing much of anything. You are the antidote to all of that.

While you may not have all the information, you don’t hesitate to take action.

Of course, this can be a serious problem because you need the right information to take the right action. Still, people give you a lot of credit.

They give you the benefit of the doubt because at least, you’re the person who takes action and tries to produce results.

Positive Traits of the April 4 Zodiac

You’re the type of person who actually makes a move while everybody is just talking.

If you have any one weakness, it is that you tend to act too much and talk very little.

Negative Traits of the April 4 Zodiac

One thing that you have to work on is your tendency to act in a very brash manner.

While it’s commendable that you prefer to take action instead of talking on and on and on, keep in mind that a little bit of judgment of research can go a long way.

What this does mean is that you just need to factor enough facts together for you to increase the likelihood that your decisions will be the right ones.

Unfortunately, you’re too impatient for any of that and you end up repeating the same negative pattern again and again.

The particular aspect of Fire that is most apparent in your personality is your fire in the belly.

You don’t have much time for reasoning and analysis. While you require some information, you don’t require a lot.

For the most part, this works in your favor, but for the big things, this might actually work against you.

The particular aspect of Mars that is most prevalent in the personalities of people born on the 4th of April is Mars’ authoritative and dictatorial nature. You like to dictate to people.

You actually have a very kind view of people around you. You tend to be very overbearing and dictatorial because you feel that that’s how they should behave or should decide because it’s for their own good.

A little bit of sensitivity goes a long way, because let’s face it, most people don’t like to be dictated to.

My Top Tips for Those with an April 4th Birthday

You should avoid making brash decisions. Always consult with other people.

Always try to iron out a consensus.

You’d be surprised as to how much better two heads working on a project would be, compared to one head.

The lucky color for those born on the 4th of April is Red.

Just like the color Red, you are very passionate and you are capable of a lot of action.

Unfortunately, you can also see red and end up blocking out a lot of otherwise helpful information that would have led to better decisions.

This is Why People Born on 4th April are So Unlucky

While there’s confidence and energy to an abundant degree within the soul of anyone born on 4th April as an Aries, there is also, unfortunately, quite an unlucky streak in the lives of these people too.

Sometimes it seems as through they’re running from one calamity to the next.

In short, it’s due to a combination of temptation and impetuousness that’s extremely pronounced in those of this star sign – especially born on this birthday in particular.

Bad luck follows those who don’t keep their affairs in order, and unfortunately, someone born on 4th April prefers to begin new things rather than seeing them through.

Jobs, studies, even relationships all fall under this purview, and because someone born on this day is extremely apt to get bored easily and begin looking for the next exciting thing.

Worse, they are unfortunately not aware of how this trend affects those around them.

Don’t be scared though – by showing a little more of a measured pace and seeing things through, a greater appreciation of life and its ups and downs can lead to better luck all around.

Final Thought for the April 4 Zodiac

Try to be a little bit more sensitive. Understand that things are not black and white.

Understand that people do have their own agendas and, in most cases, it’s worth it to give people the benefit of the doubt.

At the very least, hear them out. You’d be surprised as to what you would learn.

You would also be surprised as to how the information they will give you can help you make better decisions.