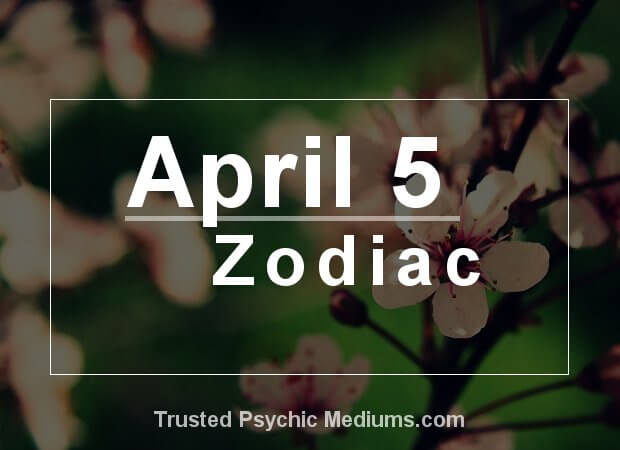 What is your Zodiac Sign if you were born on April 5?

If you are born on April 5th, your Zodiac sign is Aries.

As an Aries person born on this day, you have the typical Aries personality. You are confident, energetic, driven, and often courageous.

People are impressed by your level of activity, spontaneity, and willingness to cut straight to the chase.

As you can probably imagine, a lot of people are quite uncomfortable and frustrated with having to walk on eggshells regarding certain issues.

This is why they are quite impressed with your personality. It seems like you couldn’t care less about social convention and other forms of “social correctness” and you cut straight to the chase.

Of course, for every admirer and fan that you generate, you also tend to attract critics and flat-out haters. Such is life.

You can’t please everybody and you have the type of personality that can live with that fact.

Lovers born on April 5th are very stubborn when it comes to romantic issues.

While you don’t have any difficulty attracting members of the opposite gender, you have a tough time keeping them.

The answer should be quite obvious to you. You are the type of person who says, “Take me for who I am. What you see is what you get.”

Well, it’s one thing to say that, it’s another to actually apply it to both yourself and your partner.

You think that relationships are one-way streets. In other words, you can impose all sorts of standards and your partner just has to live with it.

Since you are a naturally charming person, you can get away with this type of thinking for quite some time. However, as you get older, you are forced to mature and fully understand that relationships are two-way streets.

Whatever standard you wish to impose on other people, you must first impose on yourself. That’s how the game of love works.

Those with a birthday on April 5 would be best suited for careers involving leadership and communication.

Now, while it’s easy to understand the leadership implications of your personality, the communication part is a little bit puzzling. After all, you’re the type of person who like to call himself or herself a straight shooter.

You don’t beat around the bush, you just tell it like it is. Now, you probably already know that this rubs many people the wrong way.

In other words, you have no input on what you’re going to say. You have a blunt style that is best suited for prepared speeches.

As long as you speak in this way, you will be quite successful in your communications career.

In other words, people born on other days of the Aries calendar cycle have certain aspects of the Aries personality. You have it all.

This can be a good thing, and this can be a very bad thing. It all depends on how you play it.

Positive Traits of the April 5 Zodiac

You are a very active, direct, enterprising and powerful person. You cannot be denied.

When you enter a scene, people can’t help but pay attention because you have a force of personality. They have to deal with you.

This, of course, enables you to attract quite a following. People view this trait very positively.

Unfortunately, just like with any other human trait, there will be people who will be turned off by your personality.

Regardless, you know that you can’t please everybody and you are perfectly happy with that.

Negative Traits of the April 5 Zodiac

One thing that you need to really improve on is your tendency to look at the world as black and white.

You also understand that you tend to attract a lot of critics and haters.

Now, you should draw the line at this point. You should be content with the fact that you can’t please everybody.

However, there are many people born on April 5 that look at this binary situation as an excuse to be kind, loving, generous and very accommodating to their friends and cruel, merciless and even ruthless to their enemies.

You can’t play the game that way because if you burn too many bridges, you would be surprised as to what could come back to haunt you.

Fire is the paired element of all Aries people. Fire in the April 5 personality is expressed in the form of relentlessness.

This fits your personality like a glove. If given enough resources, your confidence continues to grow, grow and grow.

This can be a good thing, but it can also be a scary thing for people who are on the wrong side of your energies.

Similarly, Aries people often find themselves in the middle of controversies. Instead of running away from them, they in fact welcome the confrontation and in most cases they come out ahead.

The more they come out on top, the more fans they attract.

This gives them an incentive to be as controversial, provocative and direct as possible, which can be a setup to an ultimate fall.

My Top Tips for Those with an April 5th Birthday

You should be more empathetic.

Don’t think that it’s only your rules and your personality that rules the day.

Every dog has his day and, unfortunately, your days might be shorter than you realize.

The lucky color for those born on April 5 is Green. Green indicates a self-sustaining power.

You are so self-confident that you seem to thrive off your own inner sources of power.

It seems that regardless of how many people criticize you or hate on you, you still find a way to keep pushing forward.

With that said, green is also the color of envy. So it’s no surprise that a lot of people envy your personality.

Those who are an Aries born on the 5th April are very prone to feeling a kind of secret despair and hopelessness that many other Aries born on other days don’t often feel.

It’s an unfortunate reality of the astrological combinations making up this date – whatever your age.

It’s not easy, but luckily, there’s an explanation. Aries people like to make their way through life by following their heart and exerting their will on things.

Desire and hopelessness, meanwhile, come from a position of feeling as though life is out of one’s control.

The trick here is learning and living the fact that this is actually okay – it’s actually literally part of life.

You simply cannot control every element of every set of circumstances, and trying to do so will only make you feel depressed and out of control.

Instead, trust life to follow the course of events that leads to your best self and best life – and more often than not, you’ll find your faith is amply rewarded.

Final Thought for the April 5 Zodiac

Be the one to build bridges. You’d be surprised as to how powerful alliances can truly be.

While a lot of your allies might seem like weak sheep to you currently, it would be very interesting to see how a change in the turn of events might turn them into lions.

It’s better to be allied with lions rather to have them staring at your face during moments of confrontation.