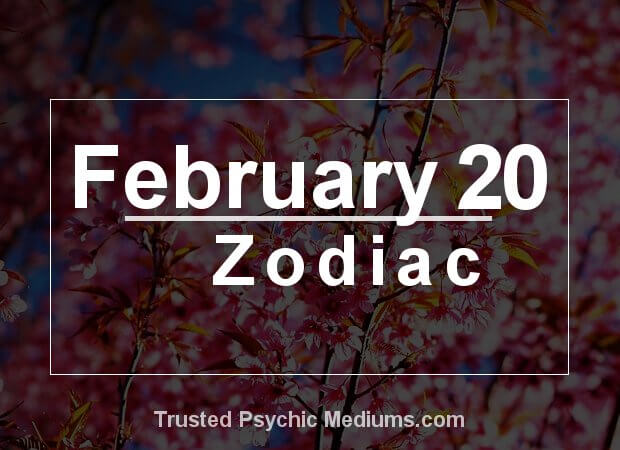 What is your Zodiac Sign if you were born on February 20?

If you are born on February 20th your Zodiac sign is Pisces.

As a Pisces born native, you have a very strong romantic side. We’re not just talking about lovey-dovey stuff involving your romantic partners.  We’re talking about something bigger.

You look at life based on a sense of adventure. You tend to look at life as involving heroes, villains, and some sort of romantic narrative.

You feel that there has to be some sort of great lesson to be learned that reaffirms the greater nobility of people.

This is a romantic mindset.

Not surprisingly, you tend to give people the benefit of the doubt. You usually don’t come in to any kind of social situation with a high level of suspicion and skepticism.

A lot of people would describe you as soft-hearted, kind, and endearing.

Unfortunately, this is not the only reading you would get. This is not, of course, the only interpretation in town.

Other people might consider you naive, and easy to deceive. Do yourself a big favor, and try to ground some of the romantic notions you have about life on cold hard reality.

As much as we would like to believe that life is just an endless series of rainbows, puppy dogs, and lollipops, it only takes a few setbacks, failures, and pain to realize that there’s more to life than just romantic preconceptions.

Now, don’t take this the wrong way. This doesn’t mean that you should not have some sort of ideals to pursue.

What this does mean is that you should look at reality straight in the eye and try to remake it based on your ideals, instead of the other way around.

Lovers born on February 20th are romantic. This means that they know how to be gentle, loving, caring, and nurturing.

They really go out of their way to make their romantic partners feel loved, completed, and protected.

Why? They always have a choice.

You have to respect that choice. Different people have different values, and for you to impose your romantic values on others can cause, at best, confusion, and at worst, conflict.

Do yourself a big favor, and allow your romantic partners to mature in the relationship. Don’t beat them up with your standards. These standards may seem unrealistic or inappropriate.

Those with a birthday on February 20 are very responsible people. You are able to commit to projects.

As long as you agree with the objectives of the project, you can commit, and this unleashes your focus. You are able to focus all your energies and attention, and things usually pan out quite well.

You rule the zodiac’s 12th house, which is the house of dreams. This involves, healing, creativity, and imagination.

Accordingly, people born on February 20 are often best suited to become directors, playwrights, or any kind of role involving the arts.

Pisces people are generally good-natured people. It’s very hard for you to hold a grudge.

It’s very hard for you to write people off. In many cases,  a lot of people think you are selfless, versatile, and oh-so-giving.

You also have a strong spiritual side that enables you to draw a strength in trying situations.

Positive Traits of the February 20 Zodiac

The greatest trait that people born on February 20 have is their resilience.

It seems that regardless of how rude or messed up their friends or partners may be, they are still able to respond with understanding, kindness, gentleness, and yes, forgiveness.

As we can probably already tell, if these types of people hang on to imbalanced relationships, they can end up getting the wrong end of the bargain.

You have to remember that romantic relationships, as well as friendships, have to be mutually beneficial.

This doesn’t mean that you have to get money from your friend, or social status.

All this means is that both of you should benefit from the friendship, otherwise, it’s probably best for you to relegate that friendship to a lower level of intimacy.

Negative Traits of the February 20 Zodiac

As you can probably already tell from previous discussion, people on February 20 tend to exhibit the worst aspect of the Pisces as far as misplaced loyalties go.

You can easily become an emotional doormat. You often find yourself hanging on to relationships that you have no business hanging on to.

It’s a good idea to establish some distance from those people.

Water is the paired element of Pisces people born on February 20.

Water is the paired element of Pisces. This applies across the board.

As far as February 20 people are concerned, the specific aspect of water that is most relevant to them is the continues flow of water.

You draw your gentleness and kindness from your emotions.

The interesting thing about you though is that even if you are feeling negative emotions, you find it within you to express or respond to that emotion in a positive way.

That’s the kind of person you are. You have a lot of love, compassion, and empathy to give.

Neptune is the ruling planet of people born on the 20th of February.

This planet is not just connected with dreams and fantasies, but also with music. It’s no surprise that people on this day tend to be quite musical in nature.

You also bring a lot of imagination to your friendships and relationships. Unfortunately, you often let your imagination and ideals get the better of you and you end up in an abusive relationship.

You find yourself taking abused and feeling like you can’t do anything about it.

My Top Tips for Those with a February 20th Birthday

You should avoid: living life with a pronounced state of emotional fantasy. You have to remember that we live in a fallen and imperfect world. That’s just the way things are.

You’re really not doing yourself any favors if you try to read in  too much positivity in any kind of emotionally imbalanced situation you find yourself in. Don’t be afraid, nor should you hesitate, to cut the cord.

The lucky color for those born under February 20  is represented by the color green.

Green is a very nurturing color. This is the color of growth and hope. You are able to keep giving repeatedly, as you nurture people around you.

You have that ability to try to heal and reconcile people.

Keep in mind, however, that you only deal with people who deserve it. That’s the bottomline. Otherwise, you might end up getting hurt. I’m not just talking about emotional harm.

Why Do People with a 20th February Zodiac Attract the Wrong People?

Individuals who were born on the 20th February were born as an Aquarius with some growing hints of Pisces for good measure.

This is a wonderfully wise combination, but it can, unfortunately, have something of a negative effect on your love life too, if you aren’t careful.

Being born on 20th February makes you prone to put others before yourself, and your sense of kindness and of doing what’s right for the common good are all second to none.

Unfortunately, though, this can mean you expect the best in people, including partners – who end up coming up short.

A common mistake of people born on 20th February is confusing charm and charisma with integrity and kindness.

Just because someone buys you dinner, it doesn’t mean they’re going to consistently spoil you throughout the relationship.

Sadly, people with a birthday on 20th February often find that their partners end up becoming lazy, selfish and indulgent over time – when the prey has been won, so to speak, they don’t lay on the charm any more, leaving poor Aquarius out in the cold.

Final Thought for the February 20 Zodiac

These natives should realize that life is not a dream world, seriously.  There are lots of messed up people out there that you should keep an arms length.

Now, your heart probably bleeds for them and you’d like to help them, but do yourself a favor, set up a situation where you can try to help them without them harming you.

This is not as easy as it sounds.