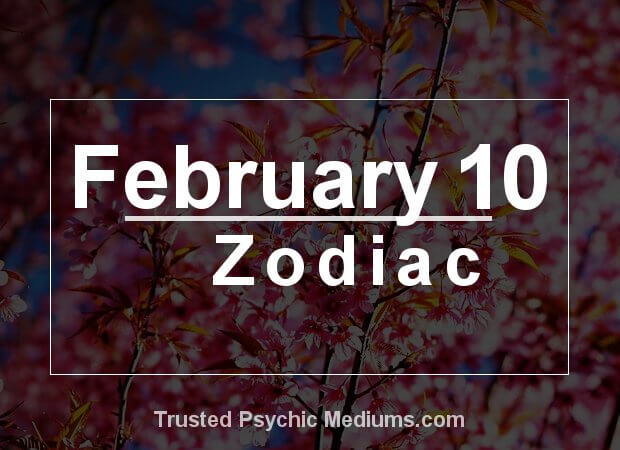 What is your Zodiac Sign if you were born on February 10?

If you are born on the 10th of February, your zodiac sign is Aquarius.

As an Aquarius born on this day, you have beliefs that are, to put it mildly, unconventional.

While everybody has beliefs that are on the wacky or unorthodox side, you take things to a different level because you allow these beliefs to all other areas of your life.

This is where you get into conflicts with other people.

Unfortunately, you view yourself as somebody who is so principled that you either follow your own internal belief system or life simply isn’t worth living.

The longer you stick to this black and white version of reality, the longer you make things unnecessarily harder on yourself.

You have a lot to offer. You’re intelligent, personal, and obliging. You make it a point to be helpful to people.

Don’t let that all go to waste because of personal extremist attitudes you may have.

Lovers born on February 10th are perfectionists as far as their love lives are concerned. They believe that there are certain romantic ideals that should be present in their life.

Otherwise, they don’t allow themselves to become fully committed.

In many cases, they are more in love with the concept of love than love itself.

Believe it or not, love is not just a principle. It’s also a practice.

It grows in value the more you show love and demonstrate it to people that matter most to you. It also grows in value when you seek it our in spite of initial difficulties.

It goes without saying that a lot of people born on February 10th have a difficult time developing real, mature relationships because they hang on to these unrealistic and unreasonable demands they place on themselves.

Those with a birthday on February 10 can be successful in the fields of electronics, computers, space technology, and philosophy.

Personally speaking, if you have any kind of philosophical or academic streak to you, you should go into philosophy. It fits your personality like a glove, seriously.

With philosophy, you just need to be able to defend your views with coherent arguments, and you’re in business.

There are no results, unlike the world of business. There really is no right answer as long as you are able to argue competently.

Other than that, you are going to run into trouble because you tend to hang on to personal ideals that may not sit well with people who prefer to live in reality.

Deep down inside, you are a very observant person.

However observant you are, you tend to always come up with conclusions that further reinforce the things that you already believe in.

Instead of your observations leading you to become more grounded in some sort of shared reality, you believe that the things that you pick up from the outside world further corroborate a lot of your more extreme ideas.

Positive Traits of the February 10 Zodiac

Aquarians born on February 10 are generally sociable, helpful, and compassionate.

You are an idealistic person. You believe that things have to be done a certain way, but unlike other Aquarius people who just content themselves with just preaching and giving sermons to other people as to how they should live, you actually walk your talk.

This can be a very positive thing, but it can also lead to potential trouble.

Negative Traits of the February 10 Zodiac

You have a lot of beliefs that doesn’t square with other people’s beliefs. While everybody’s entitled to their own belief system, you tend to insist on yours.

You believe that the way you see things is reality. Everything else is an illusion.

It’s not uncommon for you to call those other people’s beliefs lies. This is where it becomes problematic for you.

While you have it in you to get along with everybody, as you get older, the more stubborn you get. This creates a lot of problems for you. You become more detached and aloof.

You might want to take a break and ask yourself, “What am I being so stubborn for?” You’d be surprised at the answer.

For people born on the 10th of February, the particular aspect of air that is most relevant to your personality is your need for sustenance.

Air is sustaining. Living creatures will not live for long without air.

This sustenance plays out in your life in the form of ideas. You are sustained by the extreme or unusual ideas you believe in.

As you get older, you gather more and more facts to support those ideas. While this can be good, the way you do things tends to produce negative results. Why?

You end up living in your own personal bubble. What’s going on outside of you is not some sort of alternative reality. It is reality.

Uranus is your ruling planet.

Uranus is remote, distant, and gaseous. It also has a pretty strong gravitational field. As you get closer to Uranus, it becomes harder and harder to pull away.

This applies to the ideas, and often misconceptions, you subscribe to. It’s a good idea to push back against them and examine them under a microscope.

You might be surprised as to how often you find yourself barking at the wrong tree.

My Top Tips for Those with a February 10 Birthday

Avoid taking yourself too seriously. This is non-negotiable.

If there is anything that would lead you to unnecessary drama or conflicts in your life, it is your tendency to believe your own press and your own ideas.

Like it or not, there is a greater world out there and there is such a thing as objective reality.

You might want to check in more regularly regarding what other people are saying, doing, and believing in to make sure that you are at least on the same ball park.

Otherwise, regardless of other positive traits you have, you might do yourself in as far as bad choices go by stubbornly pursuing your misconceptions.

Lucky Color for the February 10 Zodiac

The lucky color for those born on February 10 is represented by blue.

Blue is often associated with loyalty and possibility.

While loyalty could be a good thing, too much loyalty can be a form of bondage.

Know the difference. It’s always a good idea to challenge your cherished beliefs. They might not be as durable and as strong as you think.

If Your Birthday is 10th February, Never Do This

Being born on 10th February as an Aquarius individual is like an invitation from the universe to pour the collective unconscious of humankind right into your brain.

It can feel overwhelming at times to be so in touch with humanity in ways that are so hard to articulate.

But if your birthday is 10th February, never allow yourself to run afoul of cynicism! This is the one thing that’ll dry up your talents before they’ve had the chance to blossom.

Being an Aquarius is about being an individual, which means you have to go your own way in life, and that takes courage.

It’s very easy for the ways of the world to grind us down, and that’s especially true of the individual who was born on 10th February.

Yours is a soul that’s more sensitive to nuances than you sometimes care to admit, and it can create a lot of difficulty in staying the course and staying optimistic from time to time.

It’s not your fault, but by recognising when these feelings arise, you can continue on your path with clarity.

Final Thought for the February 10 Zodiac

Learn to look at other people’s point of view. Try to learn from a collective point of view of conventional knowledge.

Newsflash: you’re not going to die when you admit that some of the things that you believe in are wrong or inappropriate.

The more humble you are as far as the ideas you choose to subscribe to, the more power you will have over your life.