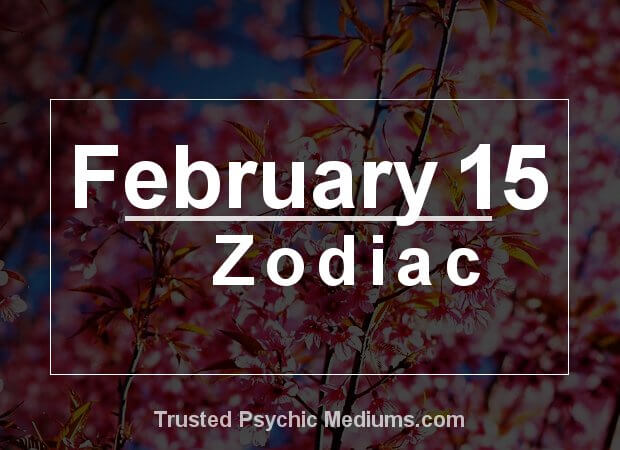 What is your Zodiac Sign if you were born on February 15?

If you were born on February 15th, your zodiac sign is Aquarius.

As an Aquarian born on this day, you have a rebellious nature. You believe you are an unconventional person, and you look at life with a fresh set of eyes. You get bored easily.

Spontaneity is one of your highest values. It’s one of the things you look for in any situation and prospective social connection.

You also believe you are an original person. You find it hard to hold back when speaking your mind, especially with sensitive topics like politics, religion, and lovemaking.

As far as business and careers go, you are not driven by money as much as you are driven by the opportunity to turn an idea into reality.

Lovers born on this day are very hard fishes to catch.

They have a tough time committing because of their very high standards. They hold themselves to these standards and expect everyone to meet up or at least match those standards.

They are often disappointed and frustrated by this.

They demand a high level of intelligence and wit. They also require their potential romantic partners to know how to hold up their end of the conversation.

While they don’t hesitate to have a good time with partners who look good, they are very selective as to who they’re going to give their heart to.

They don’t like to be held down, restricted, or otherwise forced to work within rules. They like to look at rules as things to be broken.

Once you do catch their heart, they will be loyal to the death.

Those born on this day are progressive thinkers. They don’t like to think inside the box or in terms of linear connections.

They always look at something bigger and better. This is why they get taken in and fascinated by new theories and ideologies.

However, they tend to lose interest very quickly. It takes quite a bit of effort for them to turn ideas into reality.

They require a lot of time, and often unhappy with the results, because they have a perfectionist streak.

They tend to do well in careers involving theories. The best jobs for people born on this day are theoretical physicists, researchers, philosophers, and other fields that are big on theory but don’t demand tangible results.

People born on this day are fascinated with things that are new, unexpected, and shocking. They are big on connections and looking at things in an unconventional way.

If you want to attract their attention, come up with something quirky to say.

They tend to attract a lot of people because they seem to stand out from the crowd. It has everything to do with their minds.

Positive Traits of the February 15 Zodiac

You can be a very brilliant and talented person. You have what it takes to be successful. Your perfectionist streak leads you to act with your highest values in mind.

You are kind, generous, and you have a very humanitarian side. You always try to use your creativity and imagination to champion causes that help other people.

Negative Traits of the February 15 Zodiac

You tend to live within your little world. You try to impose things that you think are right on other people.

Like other Aquarians, you tend to be overly idealistic, and you let it get the better of you more often than not.

You have such high standards with friendships and romantic relationships that you often end up passing up on partners who would have been very good for you.

Air is your paired element.

It represents ideas and unconventional associations. This aspect of air fits your personality like a glove.

Like air, you tend to move around very quickly, as far as your ideas go. It’s very hard to pin you down and get you to commit.

However, once air is frozen, it can get really cold and solid. Same applies to your convictions. Once people get you on board, it’s very hard to shake you off.

Uranus is the planetary ruler of all Aquarian natives.

The particular side of Uranus that is most relevant to people born on this day is its remoteness and mystery.

Uranus is remote and mysterious. It seems like there’s still a lot to learn about it. The same applies to your personality.

While you have a public persona that people can easily associate with, you have many parts of yourself that are hidden.

My Top Tips for Those with a February 15th Birthday

Avoid being eccentric, for being eccentric’s sake. You would advance in all areas of your life if you focused more on what unites you with other people, rather than on superficial differences.

Your lucky color is blue.

This color is associated with wisdom, depth, and character. You hold yourself to a high standard. You have very pronounced ideals.

This is manifested in the traditional association of blue with the characteristics of confidence, honesty, and loyalty.

Countless cultures all over the world have a superstition around the number 13, and in almost every case, it’s because it’s seen as an unlucky number.

Many people go to remarkable lengths to avoid interacting with the number 13 when they’re especially superstitious.

However, people born as an Aquarius in February are never ones to go along with the traditional or boring and conventional way of thinking.

And in the case of the Aquarius born within the 15th February zodiac arrangement especially, the number 13 can bring nothing but good fortune.

That’s because the number 13 is an angel number for people who were born on 15th February.

It connects them to higher wisdom and clues them in on the directions in life most likely to lead to success, love and the fulfilment of one’s life purpose.

People born on February 15th who are unaware of this truth often nonetheless feel themselves drawn to the number 13 anyway, and certainly don’t hold any faith in the superstition of it being an unlucky number.

It makes sense, after all, for these people to tread the path others dare not, and the number 13 has an angelic connotation that ensures doing so will always lead to greatness.

Final Thought for the February 15 Zodiac

While it’s good to look at life in unconventional ways, focus more on what unites us.

As idealistic as you are with your plans and goals for bettering mankind, you can contribute more if you focused on what we have in common instead of how special and unique you are.