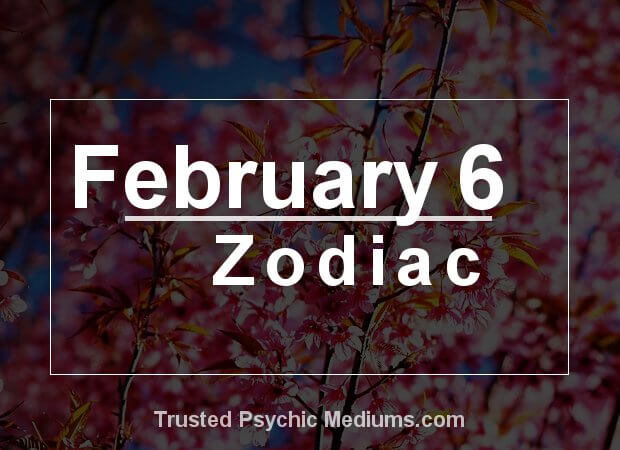 What is your Zodiac Sign if you were born on February 6?

If you are born on the 6th of February, your Zodiac sign is Aquarius. As an Aquarian born on this day, you look at the world as a place primarily of possibilities.

Reality and sticky situations and tough choices don’t really interest you. Instead, you focus primarily on what could be.

This comes as a surprise that you are easily the most imaginative person in most rooms you find yourself in.

People are drawn to your natural sense of optimism and courage.

You don’t hesitate to question things as they exist. You know in your heart of hearts that there is always a better way forward.

Lovers born on the 6th of February are like honeybees that float from flower to flower.

It’s very hard for you to fall in love because you have such an idealized version of love. You feel that you are cheating yourself or otherwise compromising with yourself if you allow yourself to lower your standards.

Since ideals are ideals precisely because they’re not reality, it’s difficult for you to commit.

While you can be quite attractive as far as your personality and your looks are concerned, it’s really tough for you as far as romance goes.

You often feel lonely and, in many cases, even when you are in a relationship, you still feel short-changed or incomplete.

It’s not like you’re not looking for love. Your big challenge is for you to develop a mature definition of love.

The good news is that every heartbreak, disappointment and frustration gets you closer and closer to reaching the point where you can finally make peace with your past idealization of love and stick to something that is close to reality.

Those with a birthday on the 6th of February tend to do best in fields involving technology, innovation and creativity.

You express yourself in terms of your sense of possibility.

You become quite impatient when you feel that you are being forced to stick to a routine or worse yet, to subscribe to what you feel is a suffocating view of a project.

It doesn’t come as a shock that you tend to switch jobs not because you’re looking for higher and higher pay. Instead, you’re looking to get constantly engaged as far as the problem sets you tackle.

You also are looking to evade any kind of bureaucratic structure that you feel robs you of your imagination and creativity.

Aquarius people can be very independent. This is especially true for people born on the 6th of February.

Your independence streak is primarily restricted to the world of ideas. If you feel that you are being forced to think along a certain track, or you are being denied resources because you don’t believe in the same ideas as everybody else, you tend to rebel or withdraw.

Your imagination is not just a source of personal power and confidence, it is also your escape. You believe that you need free rein in this aspect of your life.

Otherwise, you feel that you would die inside. It’s a very important part of your personality.

Other than that, you are a very optimistic person. You radiate confidence and this makes you attractive in the eyes of most people you meet.

Positive Traits of the February 6 Zodiac

You are quite naive regarding restrictions.

People feel tremendously free and unbounded when they are around you. Everything is possible.

The world is an open book. There are just so many ways to go forward.

It’s very hard to feel stuck, miserable and restricted when you’re around.

You always know the right things to say to liven up and excite people around you.

You are also very observant because you view reality as the building block to something that could be better. This enables you to see through other people’s tendency for betrayal and deception.

Negative traits of the February 6 Zodiac

For Aquarians born on the 6th of February, there is really no negative side to your personality, except for matters of romance.

You have such an ideal view of what love should be that you can easily become a slave to such unrealistic views. These can suck the life and vibrancy out of what would otherwise have been successful and mutually fulfilling relationships.

Do yourself a favor and stop robbing yourself of great relationships due to your unrealistic ideas about love.

One key aspect of Air that is most manifested in your personality is Air’s ability to stoke fires. Fires need oxygen to burn bright.

Your imagination and creativity burn really bright and you have a lot to offer. This is a reflection of the Air side of your persona.

Uranus is your ruling planet.

Uranus is vast and mysterious. There’s a lot of space to explore.

There’s a lot of possibilities there.

It can also have a strong gravitational field so you can only push it so far.

The same applies to your personality.

If you feel that you are being forced to work on a certain track or forced to think a certain way, you won’t hesitate to push back. This gains you a lot of respect because most people would gladly go along just to get along.

My Top Tips for Those with a February 6th Birthday

Avoid being an emotional dictator.

Just because you have certain ideals as far as your romantic relationships go doesn’t necessarily mean that these are real. It also doesn’t mean that they should govern the lives of people who are romantically attracted to you.

You should allow yourself to be more open-minded and creative. I know that’s ironic considering your imagination.

The lucky color of those born under February 6 is Gray.

Gray may seem like a drab color, but don’t let your initial visual impressions get the better of you.  Gray is actually very powerful because it can blend in with almost any other color.

This highlights the creative, encouraging and ultimately, optimistic aspect of your personality.

Never, Ever Do This if Your Birthday is 6th February

Being born under the star sign of Aquarius makes you smart, intuitive and inventive – but if there’s one thing that people born on 6th February need to remember, it’s not never allow their inner doubts to get the better of them.

There seems to be quite a strong interplay between the possibilities open to the Aquarius soul and the amount of hurdles that seem to spring up out of nowhere to get in their way.

It’s a curious dynamic, and it’s one that can make those born on 6th February especially feel more than a little beleaguered.

Given the love of freedom inherent in the spirit of those people born on 6th February, when the going gets tough, it can be tempting for the tough to get going.

However, it can be easy to confuse a gut instinct to know when to fold them with an inner doubt that just gets in the way.

Learn to tell the difference, however, and there’s little that can stop you.

Final Thought for the February 6 Zodiac

Allow yourself to be more open minded when it comes to romantic possibilities.

You already have practical possibilities taken care of. You’ve mastered that.

You have a lot going for you.

Do yourself a big favor and make sure you live a complete life by allowing yourself to let go of what would otherwise be restrictive ideas as far as your love life is concerned.