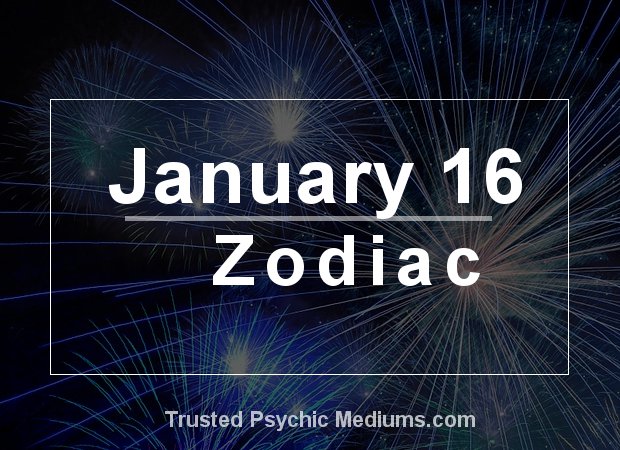 What is your Zodiac Sign if you were born on January 16?

If you are born on the 16th of January, your Zodiac sign is Capricorn.

As a Capricorn born on January 16, you have a tendency to do well under pressure.

While everybody else around you seems to be running around like chickens with their heads cut off, you find it within you to act in a cool, calm, and deliberate manner.

Not surprisingly, you are able to function well under even the most crippling pressure.

To top it all off, you are a go-getter. You never back down.

If you believe that what you’re doing is right, it will take an army of millions to prevent you from your goal.

Indeed, the more people tell you that what you’re trying to do is crazy, idealistic, or simply impossible, the more you’re excited.

You want to prove people wrong. This is why you’re such a driven person.

You’re not really so much focused on the fact that you’re going to earn millions of dollars when you achieve your goals.

You couldn’t care less about the high social esteem that you would garner when you achieve your objectives.

Your focus is on proving people wrong. This, of course, can be a double-edged sword.

Lovers born on January 16 are very confident about themselves. This is what draws members of the opposite gender to you.

There is an evolutionary benefit to being attracted to confident people. Chances are, they know what they’re doing, which translates to higher survival odds.

This is what makes you biologically attractive to members of the opposite gender.

Do yourself a big favor and cultivate this aspect of yourself. The more confident you are, the more members of the opposite gender you would select from.

With that said, you tend to be quite an aberration when it comes to Capricorns.

Capricorns usually are very conservative when it comes to members of the opposite gender. They select a partner and they stick with that partner through hell or high water.

They are very, very loyal. In fact, they are loyal to a fault.

You on the other hand, tend to fall in love with the concept of love.

You are easily distracted as far as attractive members of the opposite gender are concerned. It’s very easy to throw you off track.

The good news is, the moment you decide to fully commit to a partner, you are a partner for life.

However, it takes a long time for this to happen. You often find yourself waiting for something bigger and better to come along.

People born on the 16th of January are very passionate about what they do for a living.

You have to remember that they’re not necessarily doing it for the money. They are doing if for a high sense of achievement.

Also, for the most part, they do things because other people told them that what they’re doing is impossible. This is why they believe in pouring everything that they have got on a particular project.

This ensures that the deals that they get into rarely fail.

They are very calculated risk takers. While it can take them a while to make a decision, once they decide on something, it will take a lot to get their minds off that objective.

This is why they tend to win most of the time. Not surprisingly, a lot of employers prefer people born on January 16.

You would do best as an independent business person, entrepreneur or internet company founder.

People born on the 16th of January are very intelligent people.

When it comes to apprehending and comprehending new information, it’s very hard to beat you. You are very comfortable with ideas.

You are also very tireless when it comes to putting in work. You are not lazy by any stretch of the imagination, nor are you easily distracted.

This makes for a very powerful combination and this is why you tend to succeed.

You also are very passionate about excellence.

You don’t like to produce the same level of quality as everybody else. That is peanuts to you, that is a slap in the face.

Instead, you draw a lot of pride from the fact that people can easily see that your work product is above and beyond everybody else’s work product.

You are also a very dependable, trustworthy, efficient, and positive person.

Positive Traits of the January 16 Zodiac

People born on the 16th of January have a great sense of value.

They believe that the real definition of pride is a job well done. They base their sense of self worth in how well they do a job and how well they tackle a challenge.

This also can translate to a great sense of family obligation.

They often find themselves giving and giving to family members even though they are not receiving anything in return. They’re not doing it for the other person, they’re doing it out of principle.

They also pay quite a lot of attention to their intuition.

Negative Traits of the January 16 Zodiac

People born on this day have awesome values generally. They are commendable values.

The problem is, it’s one thing to hold yourself to a high standard, it’s another to expect everybody to play by the same rules.

This is precisely the kind of sticky situation you find yourself time and time again when it comes to those nearest and dearest to you.

While you can be unfailingly loyal and supportive of family members, often times, you can get stuck in situations where you are being used by unproductive, lazy or simply worthless family members.

You also tend to be protective of those in your inner circle. This can come off as clannish and arrogant.

The ruling element for Capricorns born on January 16 is the Earth. The Earth, in this particular day, is focused on solidity.

You are very calculated, deliberate and purposeful. You rarely act out of impulse.

You also tend to be very driven by principle and passion.

Now passion is often defined as emotional, but you’re not. You draw a lot of passion from your principles.

Saturn is your ruling planet and in this aspect, Saturn’s conventionality is what predominates your personality.

You focus on the tried and proven. While you can experiment with other areas of your life, you tend to focus on conservative solutions because they are most likely to produce the desired results.

My Top Tips for Those With a January 16th Birthday

If you’re a Capricorn born on the 16th of January, allow yourself to take pleasure in the simple things of life. Allow yourself to achieve a great sense of accomplishment in the tough tasks you’ve taken on.

Be contented with how things can be based on what is probable.

Try not to hang out for too long with people who are users and leeches.

Red is your lucky color.

Red projects a lot of passion, intensity and heat. You can get quite heated about your principles.

In fact, they provide you with the tremendous fire in the belly that you need to keep going despite the seemingly insurmountable odds that stand in the way of your objectives.

This is why you tend to be successful because you are able to pull a tremendous amount of energy at the right time.

You are able to stick to something even though everybody else is telling you that you’re going to fail or that you are pursuing the wrong path.

Although everyone born in January as a Capricorn has a personality all their own, there’s a common thread found in people born on 16th January, of every generation.

That is to say, there’s a tendency for these folks to develop a tendency towards being a full-blown foodie early in life!

Parents may be baffled by the big appetites demonstrated by their kids born on 16th January, yet it’s an early indicator of their foodie nature coming to be.

As these kids grow older, they find that they develop a refined palate and a good sense of how food is made.

People of the 16th January zodiac tend to enjoy world food and spices, but can also demonstrate a talent for making famously bland foods more flavoursome.

Whether they become culinary wizards in their own right, budding food critics or just lovers of fine dining, there’s a foodie in every 16th January soul.

Final Thought for the January 16 Zodiac

Capricorns born on the 16th of January should keep in mind that it’s okay to be tireless achievers. It’s okay to put in a lot of energy in proving other people wrong.

However, you need to gain some perspective. Understand that there are many other things you can choose to motivate yourself other than proving other people wrong.

While that has its place, your highest value should be in creating something new for the sake of discovery.