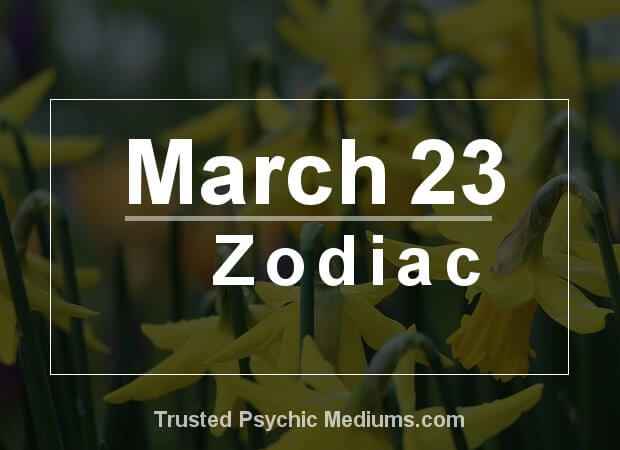 What is your Zodiac Sign if you were born on March 23?

If you are born on the 23rd of March, your zodiac sign is Aries. As an Aries person born on this day, you are known to be quite spontaneous, independent, and hard-headed.

You know where you need to go. You know what your goals are and you feel that you know what it takes to achieve your biggest ambitions.

In fact, you seem so convinced of yourself that you often don’t hesitate to step on people’s toes and rub people the wrong way just to get what you want. Unfortunately, burning your bridges is never a winning strategy.

While it may lead to passive results in the short term, ultimately, you will end up shutting a lot of doors and angering many people as you work your way up.

It’s not uncommon for people born on March 23 to go so far only to be beaten down because somebody they offended or hurt along the way beat them to their destination.

Lovers born on March 23 are very passionate, intense, and straightforward lovers. In other words, your romantic partner only needs to tell you what he wants you to do and you will change.

You will do whatever he or she wants to make that person happy.

The good thing about this is that you listen. You’re not so set in your ways that you insist that your way is the right way, and to hell with your partner.

You don’t operate that way.  But the big downside to this is that it highlights the fact that you’re not much of a listener. You have to be told. You have to be requested.

Being a great romantic partner involves listening to your partner, paying attention to what makes him or her tick and letting that person know that you respect and prize them enough to take the time to fully understand them.

You don’t have this in you. You need to be told. The good news is, once you are told, you do change.

Those with a birthday on March 23 are best suited to become entrepreneurs. This means that your independent business is the way forward for you.

You don’t really thrive in any kind of structured corporate setting because there are too many rules, and in many cases, you end up rubbing people the wrong way.

You may also find this interesting:  March 16 Zodiac

You end up making too many enemies and it’s not uncommon for these people to work together to keep you down.

Sadly, a lot of  March 23 Aries people, miss the memo on this and they often find themselves struggling in structured corporate settings.

Unfortunately, they are too busy blaming everybody else except themselves. It really is a shame to see such people struggle in their frustration.

It really is sad to see them feel stuck, because the answer is actually quite plain. They don’t have the personalities that are best suited for such structures.

They would do well, when they are the boss, instead of being an underling.

If you’re able to understand this, then it’s time to quit your job, start your own business, and make your way in the world.

Aries people born on March 23 are very headstrong and very driven. It seems that they only need to be told the direction to go and they will eventually get there.

In many cases, March 23 Aries people often take the hardest route, because they tend to burn a lot of bridges, hurt many people, and get in to many misunderstandings.

Things would have been much easier, and much faster if they work to make allies instead of trying to beat people over the head with their stubbornness.

Positive Traits of the March 23 Zodiac:

The great thing about a March 23 Aries person is, once that person tells you what they are doing, you can pretty much take that statement to the bank.

Regardless of whether it takes them one week or one year to get there, they will get there.

This tremendous sense of predictability and reliability makes them great friends as long as you can put up with their insensitivity.

They have a way of saying the wrong things at the wrong time and this produces, of course, a lot of the wrong feelings in people.

Negative Traits of the March 23 Zodiac

If there is any one negative trait you need to work on, it is your stubbornness. Like it or not, there are many different ways to get to the same objective.

You may also find this interesting:  March 8 Zodiac

By being more respectful of other people’s emotions you could go further in life.

Unfortunately, this is very hard for you to do because you are also very prideful. You don’t like changing directions when it involves matters that are not romantic in nature.

While in your love life, you are able to change yourself, in your business life or career, you are more stubborn.  You need to work on this.

Fire is the paired element of all Aries people. This is very apparent in your personality because you have hidden fire that you can draw strength  on again and again. Day after day.

Even if other people around you have thrown up their hands in the air in despair and frustration, you find the power within which keep pushing you forward. You are animated by your strength of conviction.

You are easily your own biggest fan, and this enables you to get the drive and power you need to keep pushing forward.

Mars is the governing planet of the house of Aries. Mars is a warrior god, and a warrior planet.  You have an inner warrior in you.

The more people tell you that something can’t be done, the more excited you become because in your mind you are going to be the first person that will do it.

In fact, the more pessimistic people are around you, the more driven you are to achieve. You love proving yourself right to others.

My Top Tips for Those with a March 23rd Birthday

You should avoid being stubborn. Understand that while being right is one of your top priorities, you can also be right in an efficient way.

In other words, it can cost less money, and it would take much less time to get to where you need to go if you only listen to others.

Keep in mind that listening to other people and accepting feedback are never signs of weakness.

The lucky color for those born under the March 23 is  Aqua.

Aqua may not seem like a very strong color, but given enough time, it grown on you and it stands on its own.

You may also find this interesting:  March 31 Zodiac

Regardless of what other people think, it stands on its own. This describes your personality quite closely.

Those who enjoy celebrating a birthday on 23rd March every year are lucky, because they have both the wisdom of Pisces and the strength of Aries at their back.

While the levels of which energy dominates the persona will vary according to one’s individual birth chart, the underlying influences are the same.

This means that a career in law – compassion for the client and intuition towards the truth from Pisces, and strength of will and the ability to stand one’s ground from Aries – is a superb career choice for anyone born on 23rd March.

Naturally, such a career path is not easily won, but it’s well worth persevering with – and not only for the comfortable lifestyle someone born on this day is likely to enjoy.

A career in law lets this individual put their best strengths on display, as well as helping those in need and making a tidy profit while doing so – a winning combination indeed.

Final Thought for the March 23 Zodiac

You have what it takes to be successful.

You understand that in many cases, people are too pessimistic and too wrapped up in themselves to do whatever it takes for their convictions and their dreams.

You are able to satisfy everything so you can pursue your hopes and dreams.

Do yourself a big favor. Learn to listen to other people’s feedback, because you might get information that would enable you to get your goal sooner rather than later.