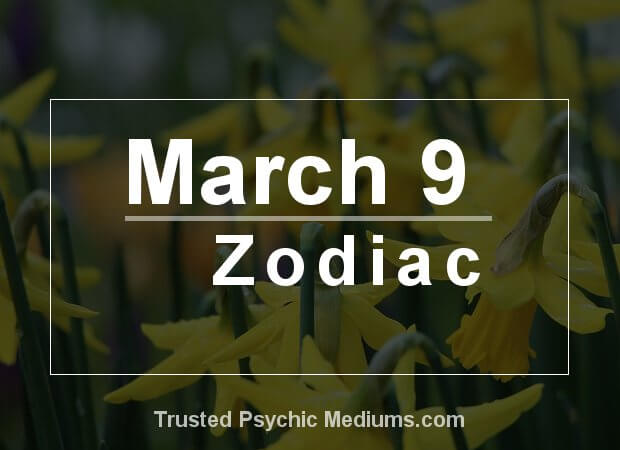 What is your Zodiac Sign if you were born on March 9?

If you are born on the 9th of March, your Zodiac sign is Pisces.

As a Pisces born on this day, you are quite well known for your ability to bring out the best in people.

You’re able to get into their emotional states and trigger a sense of shared spirit as well as appeal to their sense of loyalty.

You find it very difficult to give up on people because you always see the best in people.

Not surprisingly, a lot of people easily see you as the spiritual core of any social group you’re a member of.

This is all well and good, but you tend to let things get out of hand as far as your emotions go.

Instead of striking the right balance where you bring out the best in people, in many cases, you tend to polarize people and end up bringing out the worst in them.

This may sound paradoxical, but this is the dilemma that people born on March 9 have to confront.

Not surprisingly, you often settle for situations where you are obviously not getting the benefit of the bargain. You give, give and give, while the other party takes, takes and takes.

To make matters worse, you feel that it’s some sort of judgment on yourself to admit that you’re wrong.

To say that you are emotionally stubborn would be to put it mildly. You often stick to imbalanced emotional situations far too longer than you need to.

Unfortunately, it takes you a long time to get a clue as to the fact that you have turned into an emotional doormat. And this applies to all areas of your life.

However, this is most pronounced as far as your friendships and romantic situations are concerned.

Those with a birthday on March 9 are best suited for leadership positions.

If you were to cultivate your emotional faculties and pair that up with your ability to stick to a script or come up with ideas, a lot of things are very possible for you. In fact, you’re easily able to turn your ideas into reality.

How come? You’re able to marshall the collective strength of the social group you’re in.

Whether it’s at work or any type of social setting, you have this ability and natural emotional leadership quality.

It’s really too bad that you often let your own emotional perfectionism get in the way.

Make no mistake about it, you have a tremendous amount of potential for greatness, but in most cases, people born on March 9 are just too happy to let this lie dormant because they feel that their relationships, as problematic as they are, are worth more.

You have an inborn sense of emotional justice. This is, of course, a reflection of your highly developed emotional idealism.

You just tend to have a fixed picture of how people should be in certain types of arrangements. And unfortunately, you let this get the better of you and you often behave in a less than optimal way.

You often let things slide that you shouldn’t let slide. You often are too forgiving when you should stand your ground and affirm your rights.

Positive Traits of the March 9 Zodiac

People can easily see your leadership potential. In fact, they can spot it a mile away.

You are able to marshall people’s deep need for a win-win situation.

Unfortunately, most people don’t have a clue as to how to do this.

You, on the other hand, are able to tap into everybody’s emotional basis and can marshall the raw emotional as well as intellectual energy to make things happen.

Now, with that said, you often struggle with your own personal demons, and this prevents you from having the confidence required to get everybody else to get their act together.

Negative Traits of the March 9 Zodiac

One of the things Pisces people born on March 9 really need to get a grip on, is their ability to stick to a losing situation. Seriously, you’re the type of person who will remain stuck on a sinking ship.

You know that you’re on the Titanic, you know that the ending to your story will be a bad one, but you insist on being the last person on the ship. You do this as a matter of principle.

You think you’re being true to yourself when you do this, but all you’re doing is simply stubbornness, and stubbornness can often lead to the most profound failures.

Water is your paired element, and as a Pisces, you are a true water personality.

You go from highs and lows every single moment. We’re not even talking every single day, we’re talking on a moment by moment basis.

You have tremendous emotional turbulence. On top of this, you are dealing with outdated or impractical ideals that actually hold you back from your fullest potential.

Make no mistake about it, you have a lot to offer to this world. You are a natural leader.

Unfortunately, a lot of this remains dormant because you are simply too afraid of rocking the boat.

Neptune is the ruler of March 9 Pisces people. Unfortunately, while Neptune has a lot to offer and brings a tremendous amount of leadership, decisiveness and power to the table, it is also very emotional and unstable.

Unfortunately, the way your personality is set up, March 9 Pisces people tend to be more unstable and insecure than other Pisces people.

It’s like you own a Ferrari, but are afraid to turn the key and take it out for a spin. That’s how frustrating your situation is.

You know how gifted you are, you know how much you have to offer, but you can’t seem to get it together.

My Top Tips for Those with a March 9th Birthday

If there is any one thing that you need to do, is to let go of your paralyzing ideals. Seriously.

Learn to live in a moment by moment basis. Learn to explore the space that you’re in and you would be able to achieve victory after victory.

Unfortunately, the longer you cling to outdated ideas that hold you back from your fullest potential and disable you from tapping your profound and deep reservoir of personal power, the more you retard yourself.

Seriously, the reason why you’re feeling stuck in your life and unsuccessful is not due to the fact that somebody’s holding a gun to your head, it really all boils down to just disabling and crippling ideas you hang on to.

The lucky color for those born on this day is Sienna. Sienna has the deep understated elegance and potential that really highlights what you have to offer.

For you, spirit born into this world on 9th March, having a sense of escapism and fantasy is incredibly important.

While it’s definitely true that you and other Pisces people can overdo it on this front from time to time, it’s also relevant to say that your talent for imagination is something so many of us need in this world.

There are two kinds of people to avoid to best make use of your gift. As you might imagine, the overly pragmatic or realistic individual is one such persona to avoid associating with.

Someone who shoots down any ideas for being unrealistic or beyond belief is only going to stifle your creative power, and your best energies quite accidentally along with it.

Secondly however, try to minimise your time spent with people who have emotional excesses of a negative bent.

These people will spend hours leaning on you after their latest personal or professional travesty, yet unfortunately only seem to go from one disaster to another.

This often can’t be helped.

However, it’s unfair of these people to lean on your creativity and emotional wisdom to solve their problems time and time again without developing coping mechanisms of their own, and their draining you in so doing actually hurts their own personal growth as much as it does yours.

Final Thought for the March 9 Zodiac

If you’re born on March 9, you have to remember that your biggest enemy is yourself.

Seriously. Nobody can force you to live a life of misery except yourself.

You live in an invisible prison, and the most frustrating thing about your situation is that you’re holding the key. You just can’t find it within you to turn the key.

You are a natural leader, you can be very successful, you have a lot of potential, but unfortunately, you just leave it there. What a waste.