What is your Zodiac Sign if you were born on September 26?

If you are born on the 26th of September, your zodiac sign is Libra.

As a Libra person born on this day, you put a lot of importance in not burning bridges.

You try to keep all your networks open. You believe that everybody is valuable to you at some point in time.

Now, this value is not some sort of idealist “I love the world” value. You’re not valuing them for themselves.

Instead, you look at your network in terms of what it’s value is to you. Maybe you’ll be looking for a job in a certain industry in the future.

This is why you don’t want to burn your bridges with people in college.

Maybe you are looking to get promoted at the right company so you don’t burn bridges with coworkers. See the difference?

Your definition of value really all leads to one place: you.

Lovers born on the 26th of September are very, very ego-driven. You believe that your relationships revolve around you.

In many cases, people would be justified to think that you define relationships based primarily on how well they make you look.

You have a very ego-driven personality, and this is undeniable in how your relationships pan out.

Younger September 26 Libra people have a tough time maintaining relationships because they tend to be very selfish and self-absorbed.

Those with a birthday on September 26 are best suited for any kind of middle to upper management job.

As the old saying goes, it’s not what you know but who you know that will spell the difference in your life.

If you want to be successful, focus less on knowing what to do, and focus more on knowing the right people.

You understand this all too well, and that’s why you don’t like burning bridges.

That’s why you would go through hell just to preserve an otherwise toxic relationship, because you know that at some point in the future, you might need network access.

You might need the right referral so that you can tap the riches of life.

This mindset pays off tremendously if you are a middle manager or an upper-level manager.

You’d be surprised as to the real reason why a lot of business deals go through. In many cases, it’s not because one company is obviously superior to its competitor.

In a lot of cases, it’s due to the fact that a lot of people within those two companies know each other previously.

You understand this all too well, and that’s why you would rise up quite well in a corporate setting.

You have an inborn sense of interconnectedness. You are a big believer in six degrees of separation.

However, while most people think of the six degrees of separation in theory as some reminder of our bonds as human beings, you look at it in purely practical terms.

You believe in creating as many networks as possible so they can pay off for you at some point in the future.

Positive Traits of the September 26 Zodiac

You can be so interconnected that you can help a lot of people. This can take the form of a church or religious organization needing fund-raising money, and you can come in to save the day. How?

It’s not like you have tons of money lying around. Instead, you just pick up the phone and you call a few connections, and the money materializes.

Negative Traits of the September 26 Zodiac

You can be so focused on your network that you end up dismissing people who aren’t really connected.

The interesting thing about all of this is that these people still have value. Sure, they may not be able to put a few extra dollars in your pocket, but they can be creative people.

They definitely have their own hopes and dreams.

The point I’m trying to make is that people are ends in of themselves. They’re not just means to an end.

The problem is you’re focused on a network-based definition of your social reality tends to sweep this fundamental truth under the rug.

Air is the paired element of all Libra people.

The particular aspect of air that is most relevant to your personality is air’s ubiquity. It’s all over the place. It has to be, because we need air to live.

Your personality is reflective of this quality because air is interconnected, so to speak.

At the same token, when you look at your social networks, you are able to rise high and get paid a lot of money or make a lot of money in your own business because of your interconnectedness, kind of like how air sustains living things.

Venus is the ruling planet of all Libra people.

The particular aspect of Venus that is most relevant to your personality is Venus’ brightness. Venus is so bright that it can feel really familiar.

When people feel they are familiar with you, they are more likely to treat you like an ally and refer people to you, or refer you to other people.

My Top Tips for Those with a September 26th Birthday

You should avoid looking at people as stepping stones. They’re not raw materials, they’re not tools. They are people.

In other words, they are worthy of respect regardless of whether they can help you or not.

The good news is as you get older, you would understand this better and you would appreciate it on a deep level.

The lucky color for those born on the 26th of September is represented by the color lawn green.

Lawn green, of course, is the color of grass. And grass connotes growth, vibrancy, and life.

Your network can definitely be very lively because it can lead to all sorts of successful and happy conclusions.

Romance and making it last are of critical importance to you if you were born on 26th September.

It’s therefore important to you that every detail is taken care of and every precaution is understood when committing yourself to someone long term.

Yet commitment is not just marriage alone, but the ceremony altogether and the meaning behind it – and the time and date at which it takes place.

These can all have various astrological influences over the wedding, and for a Libra, getting married in April – the month of your polar opposite sign, Aries – is strongly advised against.

There’s a hot-headed, self-absorbed and ultimately overly impulsive energy attached to April that will flavour the marriage with bickering and keeping score if consummated during that month.

Think of an alternative if you can.

Final Thought for the September 26 Zodiac

You have what it takes to be a really successful person.

Think of yourself as a walking, talking version of LinkedIn. Yes, that popular social professional networking website.

With that said, you have to always remember that people are ends in of themselves. They are worth respecting and valuing not because they can do something for you, but because they are human beings. 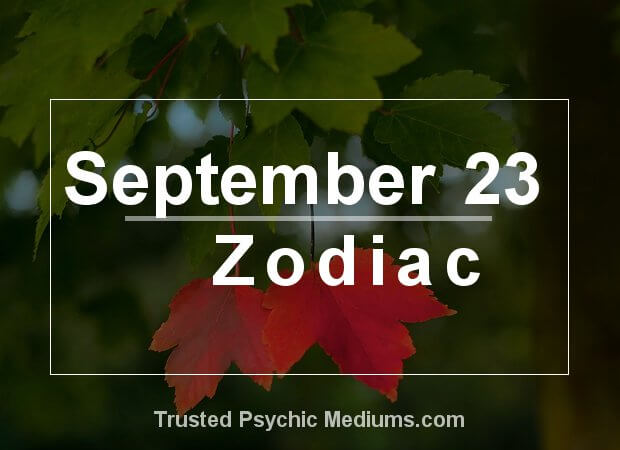