Eight of Pentacles Tarot Card and its Meaning 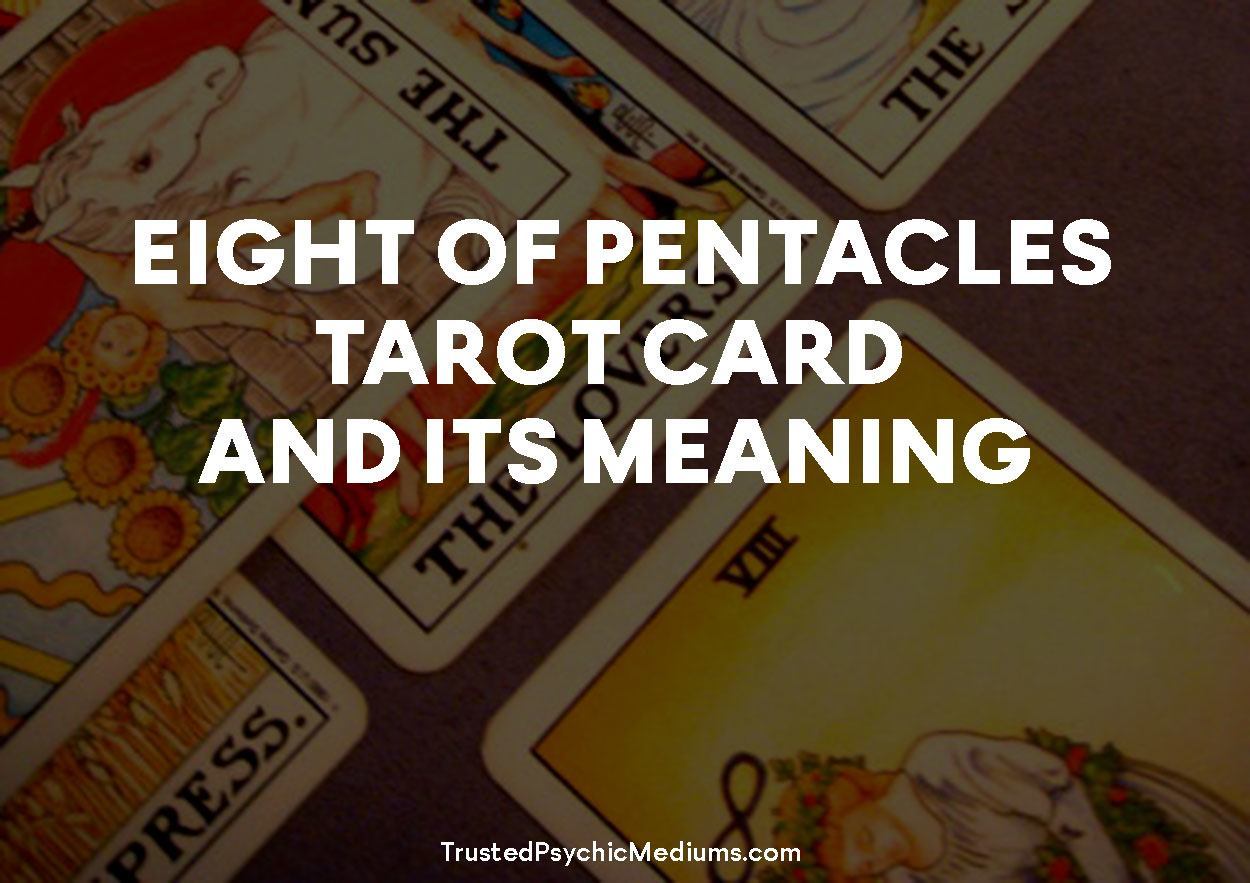 The Eight of Pentacles tarot is the card of education and apprenticeship, of skill and progress, of innovation and leadership.

It symbolizes commitment to a vision and attention to detail. It represents invention and creativity, productivity and determination, which could likewise be related to the Eight of Pentacles. It’s about quality, execution, and engagement.

The Eight of Pentacles tarot portrays a man working hard over eight golden coins. He is delicately carving a pentacle onto each coin. He has completed carving six coins, and currently he has two left to carve.

He has focused all his attention on the task at hand. He has even moved quite a distance away from his town to avoid all the distractions.

The Eight of Pentacles tarot represents the time when you are completely focused on something, feeling determined to make it as perfect as possible.

You are so engaged, and you will stop at nothing to complete the task and do a great job.

The Eight of Pentacles tarot symbolizes apprenticeship. It denotes that you are experiencing, or will experience, change and new beginnings with regard to work, finance, or education, just like the Page of Swords.

It shows diligence and determination.

You will put 100% focus and attention on the task at hand.

The Eight of Pentacles tarot also denotes that you are working at and focusing on the more important details of your life to make your situation better.

When the Eight of Pentacles tarot appears in your reading, it means that you possess a persevering and fastidious energy.

It also signifies encouragement to continue the hard work that you’re doing. Because eventually, you will reach the finish line and enjoy the rewards. While working on the task at hand, don’t forget to work on yourself, too.

The Eight of Pentacles tarot can also mean a chance to study and hone your skills, or to further your education.

If you’re a talented home baker, you may be thinking about getting certified as a pastry chef. Or you may want to take your YouTube videos to a whole different level and officially enroll in film school.

The only negative thing about the Eight of Pentacles tarot is that all your focused efforts on study or work may drive you to become a perfectionist, like the Knight of Pentacles.

Don’t lose sight of other important things in your quest to achieve your goals.

Eight of Pentacles Tarot and Love

When it comes to love and relationships, the Eight of Pentacles tarot is a good sign that you are getting to work.

Work on your relationship. Work on finding the love that you deserve. Work on making yourself beautiful and lovable.

A lover symbolized by this tarot card can signify someone who is open-minded and dedicated. Someone who possesses willpower.

You will rest assured that no matter what happens, he is in it for the long haul. He’s not going anywhere.

In relationships, the Eight of Pentacles tarot also means that you and your partner are building something valuable together.

You are putting in love and friendship while also creating security, peace, and stability in the relationship.

In essence, the Eight of Pentacles tarot is a blessing for people who are in relationships. Whether the relationship is smooth sailing or going through storms, it’s an indication that they will be able to get through the rough period or any kind of bad situation.

When it comes to emotions, the Eight of Pentacles tarot is a sign of good things, too. It symbolizes big romantic feelings without the confusions or the complications.

In the reversed position, the Eight of Pentacles tarot signifies a stop, a break, or an obstacle.

He can even be considered lazy and a happy-go-lucky, because he has no plans or goals for the relationship.

Eight of Pentacles and Money

The Eight of Pentacles tarot can indicate a financial assistance that will soon arrive. This is only a temporary relief, though. You must still find long-term solutions and work hard. Double your efforts if you must.

Don’t rely on luck. Don’t be tempted by get-rich-quick money schemes. Don’t squander money when you have it. Invest wisely.

Eight of Pentacles Tarot’s Meaning for the Future

When the Eight of Pentacles tarot appears in the future position, it means good news. It means wishes coming true and hard work being repaid.

This symbolizes the email reply from the publisher telling you they would love to publish your book.

This is the guy you’ve been stalking on Facebook finally sending you a private message and telling you how pretty you are in your profile picture.

This is the one millions views on your Youtube video.

This is the home pregnancy test telling you you’re pregnant.

There is a lot of work ahead, but with your dogged determination, the future you envision is a complete possibility.

Is the Eight of Pentacles a Sign of Good Luck?

The Eight of Pentacles is a minor arcana card that is generally associated with the concept of hard work and determination.

However, this is going to lead to a positive outcome on your part, so it should certainly be seen in a more favourable light rather than being a card with any kind of negative connotations.

There is a sense of real dedication through this card but it is something that will ultimately lead to you being able to reach your desired goals.

The path may be long, but the approach that you are taking at this moment in time is going to prove to be the correct one and that this is going to ultimately lead to you getting the kind of end results that you have been hoping for.

Furthermore, the card in the upright position can also point to you being motivated and currently working on methods that will lead to you achieving the kind of success that you were hoping for.

It does not say how long the road is going to be, but there is little doubt that you will indeed get there as long as you continue to do whatever it is that you are doing.

By achieving your ambitions and aims, there will also be a renewed sense of self-confidence and absolutely believe in yourself.

This is because things are clearly going to be working out for you, and you can then build upon each success as they come along.

The Eight of Pentacles in an upright position is certainly not going to be guilty of throwing up any obstacles in your way any time soon.

However, if you draw the card in the reverse position, then things are going to be a bit different, but that does not mean that you are then going to encounter any bad luck.

Instead, it may show that you are taking the wrong path, you are unable to concentrate in the way that you should, or you are just not putting in the correct level of effort.

It will be important to point out that it is saying that the reason why you are unable to achieve the things that you were hoping for is that of something from inside you rather than any exterior point that is changing how things are going to be working out.

Overall, while the Eight of Pentacles is not explicitly linked with good luck, it is certainly not going to be hitting you with any bad luck any time soon.

In actual fact, it advises you to continue on the path that you are working on as you will get to the desired end spot, and quicker than you may have previously expected.

So, do not be afraid should this card come up as things are going to work out well for you rather than anything negative coming your way.

You just need to have the confidence that everything is under control to then go ahead and enjoy your future.

My Final Thoughts on Eight of Pentacles Tarot

The Eight of Pentacles tarot urges you to make the necessary efforts. But before you get started on that one, be clear on your goals and everything else you want to accomplish.

There may be a lot on your plate at the moment and it will be quite a challenge to do a balancing act. Instead of being able to accomplish multiple tasks, it can even be counterproductive.

No one should be a slave to their work.

The Eight of Pentacles tarot asks you: What are you working so hard for? Do you still enjoy doing what you do? How do you strike a balance between working hard and not losing sight of the things that truly matter?