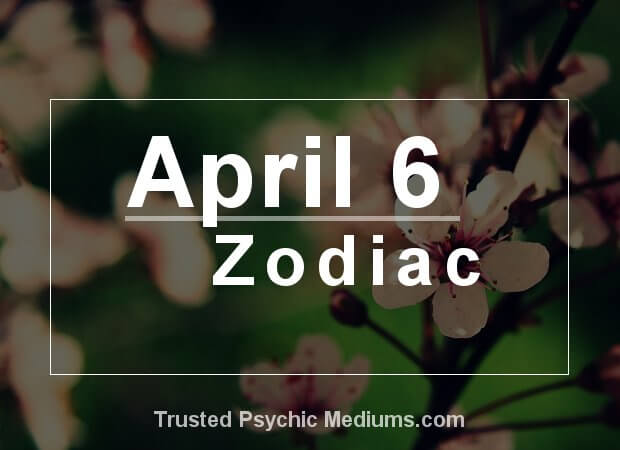 What is your Zodiac Sign if you were born on April 6?

If you are born on April 6th, your Zodiac sign is Aries.

As an Aries born on this day, you are a very entrepreneurial person.

While earth signs in the horoscope tend to be closely associated with anything related to business, you are one fire sign that is very business-minded.

It’s very easy to see why. You believe in results.

You couldn’t care less about what people intended, or what motivated them, or how they are feeling when they’re doing something.

All you care about is what they actually did and whether it pushed the ball towards success or not.

You are very direct. You couldn’t care less about feelings and you get stuff done.

As you can probably already tell from this description, you have more than your fair share of fans and critics.

Fans love the fact that you don’t beat around the bush. You don’t believe in wasting time and you get straight to the point.

Critics, on the other hand, point out that you have to deal with people based on their insecurities and their issues.

They also point out the fact that somebody who may be weak, ineffective and sometimes worthless now might actually be crucial and indispensable in the future. You can’t write people off.

How you decide on these issues can impact how successful you are in life.

Lovers born on April 6th are very direct people in terms of emotions. What you see is what you get.

While many earth signs and other members of the horoscope definitely welcome this because there’s less guesswork involved, water signs take extreme exception to this. In fact, they consider it an insult.

Love should be a process of discovery. It should be an exercise in patience and humility for both sides, at least that’s how they define it.

As an April 6 Aries, you couldn’t care less about any of that. You want to cut straight to the point, and not surprisingly, your relationships tend to be hit or miss.

While you’re younger, they tend to be disappointing. But as you get older, you begin to hit your stride as far as matters of the heart are concerned and you are able to attract better partners.

Those with a birthday on April 6 would be well suited for any kind of job. Seriously.

Regardless of where you find yourself, you will rise to the top because you’re the type of person who will get stuff done.

What matters is that you have a job that’s been entrusted to you and you will get it done, regardless of what you need to do.

This can-do attitude is your ticket to success because, let’s face it, people are creatures of comfort. We like to take the path of least resistance.

When we’re given any kind of opportunity to take an easy way out or to take a shortcut, we take it. Not you.

When something is assigned to you, you instantly work to knock it out and take care of it today, not tomorrow, not two days from now, not next week, but today. This kind of attitude will take you quite far.

Now, keep in mind that just because this will take you far it doesn’t necessarily mean that you will get paid a lot.

There are many people on this planet that barely do any work and get paid a lot, so as long as you can live with this disconnect, then you will be fine.

Aries people born on April 6 have a built-in sense of urgency. They feel that they are just incapable of waiting around.

They feel that waiting around and hoping for something good to happen is a waste of their time.

This built-in impatience is what drives them forward.

It’s very hard to deny them and that’s why when they enter a room, there is an instant sense of urgency.

Now, this is not always welcome. A lot of people would rather deliberate all day long.

In fact, a lot of people would rather not take any action.

It’s not uncommon for people with your personality to have other people try to stab you in the back.

As you read this, you probably already know this. That comes with the territory.

Positive Traits of the April 6 Zodiac

As an Aries person born on April 6, you have a sense of possibility.

Not only can you dream big, but act big as well. Put simply, you’re able to put in the work.

Now, don’t get me wrong, there are tons of other horoscope signs, especially Aquarius people who dream big. The problem with them is that their dreams remain exactly that – dreams.

Not you. Your attitude is, what’s the point of dreaming if I can turn it into reality?

The interesting part about you, though, is that your dreams don’t necessarily involve making a lot of money or being a pillar of society. In many cases, you couldn’t care less about that.

Your primary objective is to do something and to gain a sense of achievement.

Negative Traits of the April 6 Zodiac

It’s very easy to see that you will turn many people off because of your strong personality. I’m not even going to go there because that is self-explanatory.

Instead, I’m going to explore different negative aspects of your personality which is parasites. Seriously.

You attract more than your fair share of parasites.

Why? You’re the type of person who is willing to do whatever is necessary, for however long it takes, to achieve a worthwhile goal.

Now, there is no shortage of people who are willing to not only take a free ride on your efforts, but claim credit for those efforts. In fact, these people are so malicious that they actively block you from getting compensated for all the hard work and hard decisions you have to make.

It’s not uncommon for April 6 Aries people to push a team forward and beat the animating force only to end up being the least paid in the group. Stop settling for this.

I understand that your main compensation is your sense of achievement. That’s all well and good, but you also have to put food on the table.

This is especially crucial if you have a family to support. Learn to speak up for what is yours.

People will instantly fall in line because they know their next paycheck depends on your efforts.

Fire is your paired element, and as an Aries person, you are very hard to intimidate.

You don’t back down regardless of how seemingly impossible a task is. You will find a way to knock it out.

Mars is a very complicated planet. It is the planet of conflict.

It is also the planet of energy.

The interesting thing about April 6 Aries people is that they are completely at peace with this seeming conflict in the Mars personality.

They are driven by a sense of confrontation.

This need for activity and the need to conquer are interwoven in their personalities and can produce as much good as negative results. It all depends on your attitude.

My Top Tips for Those with an April 6th Birthday

You should avoid people who try to take credit for your hard work.

Remember, in most cases, you are the most valuable member of your team. Don’t you forget it.

The lucky color for those born on the 6th of April is Red.

There’s a lot of activity with the color of Red and this fits your personality closely.

Never, Ever Do This if Your Birthday is 6th April

Being born on 6th April is a gift in many respects, making you an Aries individual blessed with lots of energy and ambition to get things done.

You have a natural talent for leadership that inspires others to follow your example.

However, there is a darker side to this brilliance that has to be kept in mind.

Put simply, it’s easy for people who were born on 6th April to almost get a messiah complex from their natural leadership abilities, and forget what makes a great leader in the first place.

For instance, it’s not about having power or influence over others, but rather inspiring those around you to give their best to both themselves and something larger than themselves.

Life will get difficult fast if you continue to believe that people who look up to you are only there t be at your beck and call, so definitely take care not to indulge in any power fantasies, no matter how far up the leadership ladder you are!

Final Thought for the April 6 Zodiac

You have what it takes to be successful.

Demand to be recognized. Demand the rank that you deserve.

Otherwise, people will pat you on the back while at the same time holding you down because they are exploiting you. Don’t let that happen.