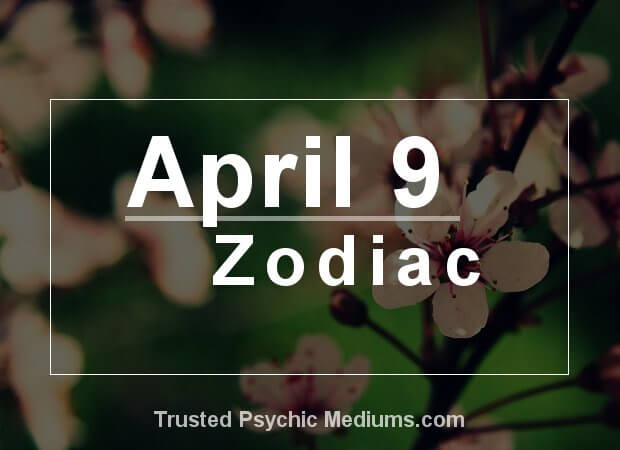 What is your Zodiac Sign if you were born on April 9?

If you are born on the 9th of April, your Zodiac sign is Aries.

As an Aries person born on this day, you are a very daring, spontaneous and enterprising person.

You don’t just settle for doing things to produce a substandard or mediocre result. You shoot for excellence.

To say that you swing for the fences would be an understatement indeed.

With that said, you do tend to attract critics.

A lot of people on this planet would be more than happy to just coast through life.

If you, on the other hand, shine out as a person who can be excellent and has shown a way to true personal excellence, you are viewed as a threat by these people.

Lovers born on April 9th are known to have very impossible expectations of their partners.

If you are in a romantic relationship, it’s obvious that the person values you greatly. Whatever you have to say means a lot to them.

When you present your expectation in either explicit or subtle ways, they are sure to feel it. In many cases, they feel pressure when you’re not really exerting pressure.

You may not have meant it, but a lot of the things that you say put a tremendous amount of stress on them and they end up leaving the relationship because they feel that they can’t live up to your standards.

Do yourself a favor and just let your partners be who they are.

Let things develop over time and both of you would be happier for it.

Those with a birthday on April 9 are best suited for careers and fields that involve destroying the status quo.

You are the type of person who will not take no for an answer.

You’re the type of person who likes to imagine new things when it seems like innovation isn’t possible. In other words, you’re a disruptor.

If humanity is to advance on both financial and physical level, we need disruption. This is why you are more than welcome in many of the fields you find yourself in.

Now, with that said, it’s one thing to be disruptive in terms of ideas, and it’s another to be destructively disruptive.

Unfortunately, you often don’t know the fine line to draw and you end up stepping on the wrong toes. Sadly, these are the toes of people who have a lot of power and influence in your field.

With all this said, it is not a surprise that people born on April 9 tend to have a tough time moving up the corporate ladder.

While they do generally get paid a lot, it’s tough for them to get promoted.

They tend to make the wrong enemies.

They have an aura around them that activity is going to happen.

They bring change to any type of situation they find themselves in.

Not surprisingly, they develop quite a loyal following.

Positive Traits of the April 9 Zodiac

You are a very driven and active person. You don’t stop until you get the result that you are looking for.

All it means is that you get stuff done.

Sadly, there are no shortage of people who are ready, willing and eager to take credit for the things that you do.

Negative Traits of the April 9 Zodiac

If there’s any one thing that you need to work on, it’s your tendency to just focus on producing results.

While producing action and results are great things, you also need to take credit. Demand credit.

You’ll be surprised as to how far you would get ahead as far as promotions, raises and compensation goes if you insist on your right.

Fire is the paired element of an Aries born on April 9.

Accordingly, you have a lot of power.

You can transform things just like fire. You can also light things up just like a flame.

Just like all Aries people, Mars is your governing planet.

Mars is an active, aggressive and decisive planet.

With that said, this doesn’t mean that it’s always right. In many cases, you find yourself barking up the wrong tree.

Do yourself a favor and make sure you research your battles more carefully and you’d be surprised as to how much more effective your efforts will be as far as bottom line results are concerned.

My Top Tips for Those with an April 9th Birthday

You should avoid people who take credit for your hard work.

Stop doing that and start getting paid what you deserve.

The lucky color for people born on April 9 is Purple.

Purple is a color of royalty.

It is very rare. People respect it.

All these aspects are reflected in your personality.

Rough, tough and ready Aries is the warrior of the zodiac – and those of you who celebrate your birthday on 9th April are no exception.

You don’t let your weaknesses show, and you always get your way through confidence and strength of will.

But if there’s one thing these folks have a soft spot for, it’s children. Even if you’ve no inclination to have a family of your own, something about the earnestness and forthright brilliance of kids – their emotional honesty, their surprising tricks and games – is impossible not to love.

Aries is considered by many astrologers to be the youngest star sign in the zodiac in terms of spiritual growth, with opportunities and possibilities spread before them.

This makes children something of a kindred spirit to someone born on 9th April, who also sees life as a vast realm of potential.

A far cry from the tiresome cynicism of jaded adults, kids are active, energetic and fun – everything an Aries born on 9th April loves to be.

Final Thought for the April 9 Zodiac

You have a lot of drive, power, and energy.

Make sure you fight the right battles. There are too many people out there who will try to steer you in the wrong direction and essentially make you fight their battles for them.

Don’t waste your time doing that. Don’t go around in circles.