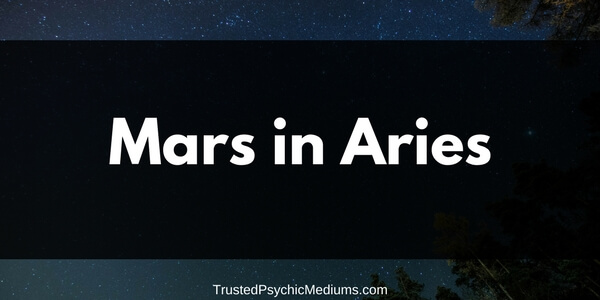 Mars in Aries is influenced by the Masculine and assertive energy of Mars, as well as the Fiery and aggressive nature of Aries, the Ram.

You are not one to back down from a fight. More likely, you are the one who starts the fight. You are the Sign of initiating conflict in the name of change.

Mars in Aries is at home. Mars and Aries do not contradict each other, but rather are redundant and serve to galvanize the thoughts and decisions of the Ram.

You are independent and strong, which comes in handy as you like to be a leader. Often, trailblazing is a lonely task, but you enjoy the challenge.

While Aries can tend to be a loner, Mars will energize you and help you seek companionship. You are a great asset to any partnership.

You will find love and fulfillment when you focus less on your own gratification and more on satisfying the needs in your relationships with others.

Mars in Aries Women makes them the ultimate fighter. You can conquer any task laid before you because you are tenacious.

Although, as the most childlike of all the Zodiac signs, you can become quickly frustrated. However, once you collect your thoughts and process them, you are able to overcome your initial feelings of panic.

You are honest and direct, and Mars in Aries makes you even more bold and fiery than usual. You love a challenge and are intrinsically motivated to succeed.

With Mars in Aries, you will have the extra energy to attack problems that have been nagging you the longest.

Men with Mars in Aries are not to be interrupted when working. These men are problem-solvers; thinkers and tinkers.

He is more likely to surprise you with a spontaneous project to fix up your home when Mars is in Aries.

His drive for meeting confrontation head-on, like a Ram, is not about fighting with others as much as it is with his environment.

Remember, the Fiery Aries will do anything for you. Once committed, this man will be attentive and loyal. Be spontaneous with this man, because he can get bored easily.

He is more open to change than other Signs because Aries is the Sign of initiating such change. Do not be afraid to shake things up.

An Aries Man will not play games with your heart or mind, on purpose. Mars in Aries is about getting things done, and no amount of energy is to be wasted on beating around the bush.

Aries needs the comfort of love and compliments and encouragement as much as anyone else.

Mars and Aries in Love

These task-oriented people love to receive feedback from others, especially when it is praise for their efforts.

In Love, people with Mars in Aries can be a bit hasty. You might be a serial dater or monogamist—jumping into relationships rather quickly.

While this love of the new is endearing, you sometimes struggle with maintaining your stamina and commitments.

This, again, is tied to your being the first Sign of the Zodiac. On your personal journey, you thrive when dealing with short-term issues and seek instant gratification.

This disillusionment can be hard to swallow, but the militaristic energy of Mars will help you soldier through. Be grateful for this influence, and try to extend this understanding to those who love you.

Although prone to outbursts or flashes or anger, you are not mean-spirited. Like a child, though, you can you can throw some hurtful words around when you are upset.

You may even throw tantrums or lash out at your significant other when you are not getting your way.

Similarly, you hold grudges about as long as a toddler—once your screaming is done, you regain your chill, and can really feel like the outburst never happened, once it is out of your system.

Your best prospects for love are with someone who respects your need for attention, affection, and understanding.

You would do well to find a partner who nurtures your higher level of thinking and need for personal space, such as a Pisces.

If you desire a bit more attention and time together, you might feel more comfort with an Aries. While temperamental at times, they are very loyal and respect your type of communication with others and the other worldly, which sometimes eludes their grasp.

You may also find this interesting:  Aries Leo Love Compatibility

Your worst prospects for love are with a partner who cannot respect your need for communication with a higher power.

You will feel oppressed under the eye of a controlling Virgo or a clingy Cancer. You also will not get along well with a fellow Aries, unless you have strong compatibility between your Sun, Moon or other Signs.

Do not try to fall in love or have a long-term partnership with a stubborn Scorpio or Taurus, who might want to control you.

Dates for Mars in Aries

Mars enters Aries on January 28th, in 2017. Mars will not enter Taurus until March 9th. This shows the window when you should initiate or rejuvenate your romantic relationships.

Mars always has this reputation of being linked to war and determination, but seeing how it can influence individual signs is also going to prove to be a rather useful exercise.

In doing so, we are able to examine a number of facts that surround this combination to provide you with a better understanding of how it could very well make a difference to your life either for better or worse.

1. It increases a feeling of independence.

If you have Mars in Aries, then you are going to feel that you are better off being independent in what you do.

This is due to you having the confidence to go it alone and the belief that you are able to handle whatever life is going to throw at you.

This in itself is not unusual as Aries is often linked to the concept of being a loner, but Mars is just going to super-charge that particular feeling.

2. You are a real asset to any kind of partnership.

When it comes to any type of relationship, then you are going to be viewed as being something of an asset to it thanks to your drive and determination to do whatever is best for the relationship in question.

You are viewed as being something of a leader and will often put the needs of others ahead of your own, which certainly helps to cast you in a better light.

3. You are tenacious with tasks.

For the woman who is affected by Mars in Aries, then there is often a tendency for you to be rather tenacious when it comes to different tasks and you are not going to give up without a fight.

You are good at setting your mind on something and then pushing forward in order to reach that goal, and you are willing to sweep people aside that are standing before you.

4. You are a real problem solver.

With Mars in Aries, a man is going to be more of a problem solver than anything else.

However, they do not like to be interrupted when they are on a mission as they prefer to be able to dedicate their thoughts and mind to the task at hand. The more complex the problem, then the more you enjoy it.

5. There is a real sense of loyalty.

This person is going to be loyal, but only once they have taken that step towards commitment. It may be tough to get them to do this, but after it there is really no point of return, and they will be by your side through thick and thin.

There is no doubt that Mars in Aries is going to result in you being fired up in a number of different ways.

You are a strong character that knows exactly what they want in life and is not afraid to then go out and get it.

Remember, you can use that fire inside of you for good rather than allowing it to be a destructive force at some point along the way.

Not holding grudges is a great way to let go of your own anger, Aries, but remember that others may not bounce back as quickly as you can.

You cannot take hateful words or actions back, once they have happened. Be aware of your potential for destructive behavior.

You will find love and fulfillment when you find a way to balance your personal needs and temper with the rationale that you are not the only one who matters.

You will gain much-needed perspective, along with love and fulfillment, when you fight the good fight that Mars brings to your Sign.