The Sun in Aries 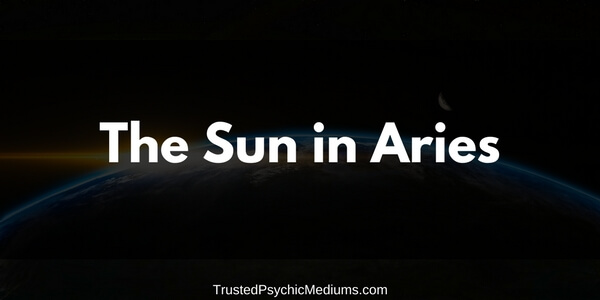 Aries is the very first zodiac sign of the twelve. This informs the Ram’s penchant for pioneering ideas, trail-blazing actions, and impactful speech. Aries, being a fire sign, you can burn through any obstacle! 2017 is your year to incinerate insecurities.

The Sun and the Ram, when combined, create a powerful union. Like the Sun, Aries is strong enough to be the center of her own system. Although she may seem self-interested, she sustains many others around her, as well, with her warmth.

The Sun in Aries Traits

The Sun drives Aries to stay in high spirits, and you are known for your enviable amounts of energy. The cooperation of the Sun and your star sign allow you to tactfully approach tough issues, and illuminate possible solutions, eloquently.

When looking for love, you and the Sun will be an explosively successful pair. Numerology for the combination of Aries and the Sun (Aries + Sun) equals 7. You will see that the number 7 will be very significant to your love life this year, Aries. 7 is the number of intrinsic truth, in Numerology.

Rams will often find themselves acting in heroic fashion. Aries, you show great aptitude for jobs including Law Enforcement Agencies, The Armed Forces, and/or as a Certified Medical First Responder. You can jump in head-first, when necessary. There is a red-hot yearning in your heart to save others.

The Sun in Aries Women

Both the Sun and the Ram are powerful forces of nature, as is the Aries woman. You use your strengths in positive ways but must demand and command respect for your destructive potential. With the shared power of the Sun and the Ram, and Aries woman can bathe a plant in nourishing light, or burn it to death. Make sure you are directing your actions and reactions in the way of love, consistently.

An unstoppable collective capacity, for creation and destruction, resides in you, Aries. This is the year to let your productivity and humor shine through for others to see. Use the Sun’s energy to help you dissolve obstructions between you and a possible new partner!

Rams can tend to get overheated, but an Aries woman knows how to harness her own firepower!Think of yourself as a solar panel, letting the Sun energize you. Hobbies and relationships will be boosted by a Ram’s internal motivations. And your extra enthusiasm can also be stoked into a newfound love of self—or, even a newfound romantic interest!

One famous Aries woman is Emma Watson. She is the feminine embodiment of the Ram archetype: strong-willed, majestic, and eloquent. She is a leader in the celebrity community when it comes to the topic of feminism. Young women, of all signs, sizes, and backgrounds, can look to her as a role model.

Lady Gaga is another flawless example of the female Aries. She is courageously unapologetic of her public persona, on-stage antics, and political stances. Gaga runs smack into controversy, without flinching. She is such a trendsetter, that her artistic effort is often not fully appreciated until considerable time has passed.

If you don’t like heat, don’t even enter the kitchen of an Aries. Or her boudoir! Aries women love to get their partners hot and bothered—but also love just to see them smile. You need a partner who can love you fiercely and keep things as spicy as you are.

You are ferociously loyal and should request nothing less than the same, in return. You are not the type to be submissive to anyone, so look for a partner who will reciprocate your affection. And who’ll make you work for theirs a little, as well? This, Aries, is a person worth fighting for!

The Sun in Aries Men

Associated with the Greek God of War, Ares, both the Sun and Ram are often seen with stereotypically masculine traits. For instance, a male ram is willing to battle another male for his lovemaking seniority, in the wild. This trait can be seen in a Ram man, as well. He is never one to back down from a confrontation.

Aries men are competitive and crave challenges. A partner who throws themselves at a Ram does not stand much of a chance of holding his attention for very long. On the contrary, he wants an intellectual equal. A shared sense of humor is essential in a close relationship.

Some may view Aries men as mysterious. The Sun illuminating Aries emphasizes his burning passions—his dangerous (most intriguing?) side—but also the idea that his very existence serves as a safe source of warmth. You can trust that no matter who he may choose a battle with, he will remain steadfast in protecting you.

Everyone has fallen for a bad boy type. Aries man the perfect balance of warrior and lover. Whatever goal he focuses on, he accomplishes. Aries may occasionally need encouragement to finish a project like fixing the sink, but you will never have to remind him to defend your honor or wonder if he would be willing to fight for you.

Hollywood heartthrob Marlon Brando is one famous Ram. His rugged exterior smoldering, he could capture the hearts of audiences, with his mesmerizing moments on-screen. He became known for his temper, which he usually tried to control. An Aries is passionate about everything—the good and the bad.

Dominant by nature, Aries needs to have the last word in an argument. Not to have the final say, understandably, feels emasculating, to him. He wants to be your protector. He wants to end the argument with resolving.
Aries men are renowned for their high libido. So, if you can stand the tempest of his temper, you will be rewarded with the truest devotion. Aries needs to fight for—and win—your love. The tempest is worth it, by the way!

The Sun in Aries and Love

The very best match for Aries, the Cardinal fire sign, is usually a cool Aquarius. Aries and Aquarius, an air sign,complement each other perfectly– as best friends, life partners, or both! A Gemini, Leo, or Sagittarius would also match well with a Ram. Leo and Sagittarius both bring the heat of a fire sign to the mix.

Aries wants to be the loyal lover and friend for life. She also embodies the spirit of the Sun, so if she feels burned, she may be tempted to scorch the earth of her enemy. Fortunately, Rams are not usually prone to cheating or lying. In relationships, arguments and tempers may flare up; but, an Aries will want to go to war with you, not against you.

When in a heated debate with an Aries, remember that you are on their home turf. No matter who is‘actually right’, know that they are up for the fight. Rams have no problem locking horns with someone who crosses them. On the other hand, once you have captured a Ram’s heart, you have it for life.

The Dates for the Sun in Aries

Make choices that put you on the path to a better destination than you could have ever imagined.2017 will be a very lucky year for the Aries woman. Numerology shows that 2017 is a lucky year for new love, equaling the number (2+0+1+7=) 1. By nature, the number 1 represents a new beginning, a search, and a blossoming.

Aries, this is the year that you make a new beginning for yourself. A new beginning to your love life is on the way. Starting 2017 off with passion, Mars crosses Aries on January 28th, followed by Venus, on February 3rd. Mercury will show up on March 13th. Spring will bring you much fulfillment, as the “Sun enters Aries” on March 20th, followed a week later by a New Moon on March 27th.

The Sun will enter Aries on April 18, at the “ecliptic longitude [of] 29.07” degrees. This is a very lucky love date for Aries, even as told by the numerology of the longitude given: (2+9+0+7=) 9. Aries women should also take special note of the following 8-day period: April 20th will see Mercury Retrograde come into play, only 8 days before Venus comes to meet Aries on the 28th.

October 5th will bring a Full Moon for Aries.This is a time to reflect on your year, so far. This full moon is the light that shines on what you try to hide in the dark.

What fears are still holding you back? What has the year taught you and brought you so far? It is time, to be honest with yourself about how to start breaking down tensions in your relationships, Aries.

Dearest Aries, your Love number, your Sun number, and your Sign number are all 7. You should be on the lookout for the number 7, in all forms. In Numerology, 7 represents the seeking of knowledge. It is hard for others to pull the wool over your eyes; however, it a bit easier for you to fool yourself.

Do not forget that this year also ends in a 7. This is the time to let the Sun shine through you, like a beautiful stained-glass window. Let others see what soft beauty lies beneath your intense exterior. July 7, 2017, will be a very enlightening day for you!

You, Aries, will always fight for what you believe is right. After a confrontation, however; you will always know how to warm your love right back up, again! Do not be afraid to apologize first, when arguing with a fellow Ram. They will see this as a strength, and appreciate that you saved them the discomfort.

You, Aries, have the gift to see the inner growth of those you love. You do not excommunicate people from your life without just cause. You argue well, and fairly. This is a healthy way to approach things— like the Ram you are— without breaking one of your own horns, in the process.

A Question for You, Dear Reader:

People in many cultures from around the world have different theories on how to calculate numerology. Some assign letters number values, ranging 1-8; some 1-9. Some use charts containing single digits only, while others choose to practice the reading of escalating charts, which reach into numbers of the hundreds and thousands. Some people even name their children, considerate of what their full name would work out to in terms of numerology.

Many parents prefer their children to have a higher name number, such as 9. So, they might consider changing a family name, such as ‘Alicia’, to ‘Aleecia’. Spellings of names can be the only factor a parent feels they can control for their child’s future. Different numbers can be sought out for respective hopes.

For example, the names Aleecia and Alicia are spelled similarly. They have a shared root name. Both names are even pronounced the same way, but have different name numerology:
Aleecia = 9
Alicia = 5

A girl or boy’s feminine or masculine form of a/the (same exact family) name would carry different values, in Numerology. Examples can be seen in many languages. For example, Francesca and Francesco hold different values, in Spanish: Francesca = 7, while Francesco = 3. Some families even alter traditional spellings of their children’s names, to achieve optimal Numerology readings.

Would you change your birth name/married name, or your child’s name, to receive a more desirable Numerological Name number?