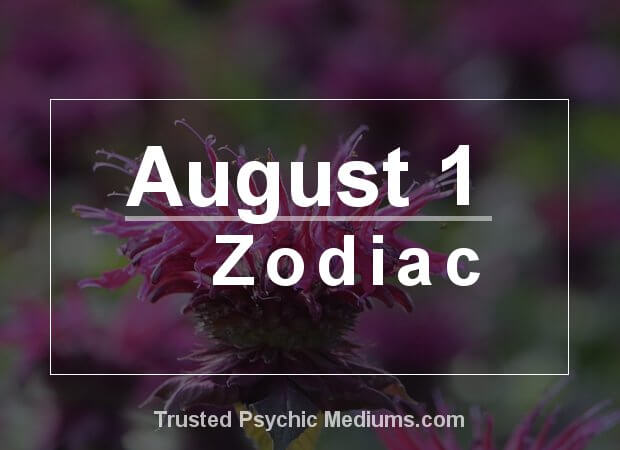 What is your Zodiac Sign if you were born on August 1?

If you are born on the 1st of August, your Zodiac sign is Leo.

As a Leo person born on the 1st of August, you are a very loving person, at least publicly.

People can’t avoid the fact that you are very liberal with your affection.

It’s very easy to see where people stand with you.

However, if they are on your bad side, they should run away, seriously, because you don’t mince words.

You will attack people. You don’t hold back.

This gives you a very black and white reputation. Either people like you or they hate you.

Lovers born on the 1st of August are very imbalanced. I guess that is the most charitable word to describe your personality in the context of love.

On the one hand, you can be very generous and big-hearted to people that you like.

However, if people can’t meet your expectations or cross you one too many times, you can be very harsh, cutting and negative.

In fact, you have a very devastating effect on people because they tend to become dependent on your approval, and when you withhold that, it becomes a crushing situation for them.

Eventually, you start pushing people out of your life because, for some reason or another, they stepped on your emotional toes. You should avoid doing this because we’re all different people.

A little bit of tolerance goes a long way because we’re all works in progress.

Those with a birthday on August 1 are best suited for management positions.

Regardless of whether we’re talking about a first level manager or supervisor or a high-level CEO and any point in between, Leo people born on August 1 tend to do really well.

Why? You know how to lead.

We’re not just talking about wearing a label that tells the other people around you that you’re some sort of manager. No.

You lead by example. You lead by getting people to believe in themselves and to level up as far as their capabilities and capacities are concerned.

Most importantly, you wake up in people a natural sense of curiosity that enables them to learn what they need to learn so they can do a particular job quite well.

It goes without saying that most organizations would love to have you as a member of their team.

Leo people born on this day have an inborn sense of leadership.

Your leadership doesn’t come from an insecure sense of wanting to prove yourself or trying to be “somebody” in the world.

It just comes naturally to you because you love people. You love seeing them make the most out of themselves.

You see people as works in progress that can be improved upon. You view this improvement process, unlike other people, as one of encouragement.

You don’t believe in imposing templates on people or difficult definitions to “whip people into shape.” Instead, you believe in cultivating them and giving them appropriate challenges so they can level up.

Positive Traits of the August 1 Zodiac

Among all Leo people, you are probably one of the most understanding. You understand that greatness cannot be imposed from outside.

It can be inspired, it can be encouraged, but it cannot be stamped or imposed by force. Instead, people would have to want to have it.

This is why you go out of your way to lead by example.

People can always come to you and see a positive role model.

Negative Traits of the August 1 Zodiac

While you can be a very positive and affirming person, sometimes you get ahead of yourself.

Sometimes you put such pressure on people that they don’t even bother. Seriously.

You have to remember that when you lead by example, you have to also lead a realistic example.

What I mean by that is, if you are hanging around with people who can only run a certain speed and you try to encourage them by running ten times faster, you might actually produce the opposite effect.

They might be so intimidated by your example that they don’t even try.

This doesn’t mean that you’re a bad person. All this means is that you have to go down to people’s levels and walk them through the many steps along the way.

The particular aspect of fire that is most relevant to your personality is fire’s warmth.

In a very cold day or night, fire is very reassuring. It helps prevent you from freezing.

With that said, if you stand too close to the fire, it can burn you.

A little bit of balance in your life can go a long way.

That’s how powerful your example could be.

My Top Tips for Those with an August 1st Birthday

You should avoid setting impossible standards.

Now, this doesn’t mean that you’re a hypocrite. Hypocrites impose one standard on other people and live by a different standard.

You don’t play that game. You walk your talk.

The problem is, your talk may be so high and so refined that few people, assuming any, can live up to them.

Do yourself a favor and just lead people incrementally.

A little bit of compassion and empathy can go a long way in setting realistic standards.

The lucky color for those born on the 1st of August is best represented by Alice Blue.

Blue is a power color. It emanates power, but Alice represents a little bit of aloofness.

This is very relevant to your personality because while people can see that you’re a role model, sometimes your standards are so high and your example is so unattainable that your leadership in all areas of your life takes a decorative effect.

In other words, people just say to themselves, “well it would be nice if I reach that point, but chances are, I’ll never get there.”

People Born on 1st August Must Always Remember This

Being born on the first day of August makes you a Leo in every sense of the word – powerful, confident, charismatic and keen to get things done.

You say what you mean and you mean what you say, and no punches get pulled in any department!

However, it’s vital that you add a dash of wisdom to your business and pleasure alike, by taking onboard how your actions are perceived by others.

Leo people have a reputation for being self-centred that, frankly, you have the power to overcome and prove wrong.

You can do this by factoring in how your actions, even those in the spur of the moment, ripple out and affect other people.

Does quitting a job suddenly leave your team in the lurch? Does going out with the girls leave your partner feeling spurned on a big night?

Add a little more forethought to your daily dealings, and watch the world bend to your desires all the more.

Final Thought for the August 1 Zodiac

You are a born leader. I believe you know that.

You can appreciate this fact. The problem is, you need to be the right kind of leader.

Sometimes your example can be so lofty and so impressive that it produces the opposite effect.

Instead of bringing out the best in people and inspiring personal greatness, it actually becomes intimidating and people don’t even try.

Do yourself a favor and learn to recognize when this happens so you can tone things down accordingly.