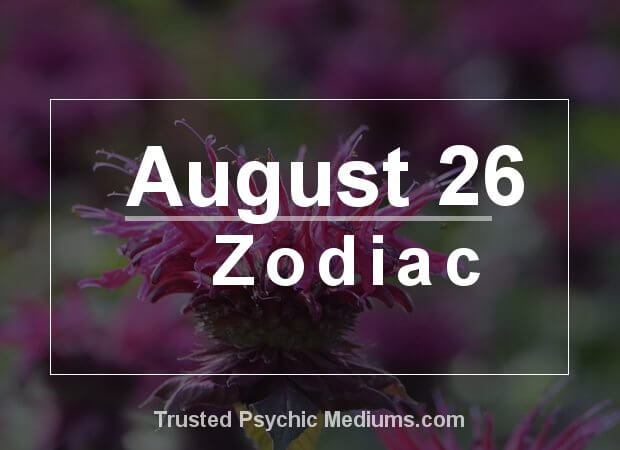 What is your Zodiac Sign if you were born on August 26?

If you are born on the 26th of August, your Zodiac sign is Virgo.

As a Virgo person born on this day, you are quick to judge people.

It’s obvious that you are able to pick up all sorts details and connect the dots in not only a logical and rational way, but you also pay attention to the consequences.

It seems that your mind operates at a very high rate of speed, while everybody else seems to plod along.

Now, knowing that you are gifted with this type of mental capability, this should be your cue to be more forgiving of other people.

Unfortunately, you use this as a source of your ego and high self-regard, which leads to you judging people around you all the time.

Lovers born on August 26th can be quite unpleasant.

You have such high standards for your lovers that very few people meet the mark. Of those that do, most don’t stick around.

You can be very overbearing. In fact, calling you an emotional bully can be quite often.

The good news is, after a few heartbreaks, you get to mellow out.

After a few relationship disasters, it quickly dawns on you that you need to be more forgiving, tolerant and accepting for your relationships to be truly happy.

Those with a birthday on August 26 are best suited for jobs involving analysis.

Whether we’re talking about legal analysis, financial analysis or any kind of analysis in between, you would do best in jobs that involve crunching a lot of information.

Now, this information doesn’t necessarily have to come in the form of numbers, but you are able to come up with rational systems for analyzing information and recommending decisions based on that analysis.

You have an inborn sense of logic. In any event, when you look at life, you are able to pick up certain patterns and you can then slice and dice this information into a very optimum fit.

This is all well and good for you, but unfortunately, all of this is happening in your head and cannot be translated into useful action.

Positive Traits of the August 26 Zodiac

You are able to pick up patterns that most other people are blind to.

You are able to pick up implications that other people need to know about, otherwise, they can lead to all sorts of disasters.

This is what is most appealing about you because you are able to see things that other people are not able to see or able to realize the implications that people need to know.

Negative Traits of the August 26 Zodiac

Where do I begin? The list of negative traits for August 26 Virgo people, unfortunately, are quite long.

However, if I were to pick any, it would be this: your tendency to judge people.

You are a very judgmental person, let’s just get that out of the way.

You think that just because you’re able to connect the dots in your head, it just means that everybody else who doesn’t think the same way as you are necessarily idiots.

This doesn’t have to be the case. You have to remember that people look at the world differently because we all come from backgrounds and have different experiences.

The sooner you become at peace with this reality, the sooner you would be able to communicate with others in such a way that would result in a win-win situation.

Earth may be light and fluffy at the surface, but if you dig deep enough, it can be quite heavy until there’s a molten core in the middle of the earth. The same applies to you.

At the surface level, it would seem that a lot of the things that you’re saying are very useful, but the more people get closer to you, the heavier you become.

And ultimately, they don’t want to have anything to do with you because you can be very harsh and judgmental.

The particular aspect of Mercury that is most relevant to your personality is Mercury’s speed.

Virgo people born on August 26 are able to pick up a lot of things and they are also able to think very quickly.

Unfortunately, you think so quickly that you make all sorts of snap judgments that paint people around you in the worst light possible.

You have all these unresolved negative feelings about people when it doesn’t have to be that way.

In many cases, you’re just simply reading too much negativity into the situation.

Do not do this. People are not as unintelligent as you think they are.

My Top Tips for Those with an August 26th Birthday

You should seriously lighten up.

It’s one thing to be impressed by your immediate intelligence, it’s another to think that other people are necessarily idiots.

It doesn’t have to be this way. By being accepting, you would become a much happier and, yes, a more effective person.

The lucky color for those born on the 26th of August is represented by the color Lime.

Lime is really a variation of the color green, which is the color of life and growth.

Lime is a problematic color because, while it is quite bright, it’s also a transitory color to decline.

Do yourself a big favor and make sure that you focus on communicating the important truths the right way so your influence grows instead of starting to decline.

This is the Most Common Mistake 26th August Zodiac people make

The deep mind of those people born on 26th August is one given to analysis and critical thinking, but the darker side of this double-edged sword is that it seems to lead them to overthinking and worrying about things that really don’t matter in the long term.

It’s all too easy for these people to simply lose themselves in nightmare scenarios of their own devising, planning their way out of scrapes and sticky situations that simply will never come to pass.

And worst still, they’ll then beat themselves up for wasting so much time!

Put your worries aside and ask yourself if the things you’re so concerned about are really so worth your time and attention. Will it matter five years, one year, six months down the line?

Moving beyond these consistent niggles is such a big key to your growth and happiness.

Final Thought for the August 26 Zodiac

You have what it takes to be a truly effective and useful person. Unfortunately, you tend to subscribe to really negative conceptions of others that tend to erode and poison your personal relationships.

It doesn’t have to be this way. Always remember that there are always two sides to a story.

Be a part of the solution.