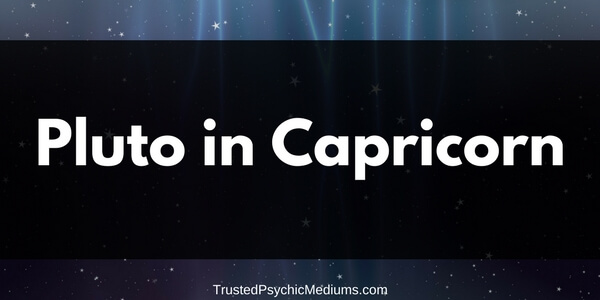 Pluto is now just over halfway through its cycle through Capricorn. It entered Capricorn in 2008, and will leave it again sixteen years later, in 2024. 2016 marked the halfway point, which we have just passed.

The last time that Pluto passed through Capricorn was between the years of 1762 and 1778, when tensions that had been mounting through the last two phases of Pluto finally exploded into war and revolution. We may be able to expect a similar period of turmoil any year now.

The prudent, hardworking sign of Capricorn is well-suited for putting into action the groundwork for change laid by the Scorpios and Sagittarians just before. Capricorn may not have the skill at conceptualizing big ideas that Scorpio has, nor the charisma of a Sagittarius, but it’s certainly more likely to get down to business and make changes happen than either of these signs.

People born when Pluto is in Capricorn are shaped by the historical events happening under this sign, and are highly committed to change, as well as sometimes being rather cynical about the current state of the world. These people can see the many problems around them, and while they’re not necessarily motivated by divine inspiration towards change, they approach the task of improving the world with grim determination.

In the eighteenth century, the people born during this period, who saw war and revolution in their childhoods, grew up to be the Romantics, the artistic movement that decried modern civilization and yearned for a shift backwards, into a more “natural” state of being.

Of course, it is impossible to predict with perfect accuracy what Plutonian Capricorns will look like when they grow up this time. We may have a Romantic revival, with people turning back towards that type of idealized past, and shifting away from the increasingly interconnected web of technology that have characterized the past two decades.

However, other planetary forces may be at work, and we may see this generation of Capricorns growing up into utterly different types of characters from the last group. The only way to find out is to wait and observe!

Women born with Pluto in Capricorn are serious, dedicated to their causes, and tend to be rather quieter and more reserved than their Sagittarian and Scorpion predecessors, although they have equal (if not even greater) power of spirit.

As Sagittarius, just before, encouraged women to move into the public eye and take on traditionally masculine roles, Capricorn women do not tend to share this passion for taking on these roles. Capricorn women tend to adhere more to the statement, “behind every great man there’s a greater woman,” rather than stepping into the limelight themselves.

The power that Capricorn women managed to hold, while never actually putting themselves into the public eye, should not be underestimated. This was not a time of gentle, retiring ladies, but instead, of women with rock-solid morals and ambitions, using frameworks of oppression to their advantage. Many women of this time got away with far more social commentary and criticism than men might have, because they were simply not being held to the same levels of accountability.

Women born in Capricorn today will undoubtedly benefit from the ways that the last several generations have broken down walls and opened up opportunities for women that were previously unheard of. Today’s Capricorn women will probably choose to step back from the intentional efforts that were made by their foremothers, resting on those achievements and using those systems to achieve their other goals, including social change and revolution.

Capricorn is not generally a romantic sign, so women born in Capricorn generally place far less value on relationships than previous generations. They do not even have the social webs that Sagittarians just before them love to build, but instead, work for the most part in an individual way towards achieving what they want to achieve.

A Capricorn women who does enter a relationship will approach it in the same way that she approaches other things in life: by quietly working towards what she wants to achieve. She may allow her partner to believe that he has power over her, but it is only an illusion. If you enter a relationship with a woman born while Pluto is in Capricorn, beware of ever allowing yourself to be convinced that you have authority over her – she will respect you as an equal, but she will never accept you as an authority.

Men born with Pluto in Capricorn are intense, highly focussed, and take the world extremely seriously. This is not a sign known for their humour – not at all like the social critics of Sagittarius before them, who used humour and commentary in order to enact change. One need only consider the difference between an eighteenth-century satire and a Romantic dirge to see the shift in the way that people aw the world.

We can expect Capricorn men in the near future to be serious, grim, and a bit cynical, as they pursue the better world of their dreams. Especially if another political upheaval is on the horizon, as it was for the last batch of Capricorn, Capricorn men are likely to be hit especially hard.

While it is certainly a stereotype to say that men are less emotional than women, it’s a stereotype that has some basis in truth – although maybe just because men are socialized to show their emotions less. When that is combined with the naturally less-than-emotive influences of Capricorn, and the trauma of a war or revolution, it can lead to men who are very closed-off, introspective, but who have difficulty relating to the world around them.

I would caution any man born during this time to remember that emotions are a necessary and healthy part of the human condition, and by denying them, you only deny yourself the range of human experience. There is no reason to shut them off completely, although it is completely understandable that you might want to set them aside. If you are doing that, then at least acknowledge your emotions as real and valid before you put them out of your mind.

Of course, women born while Pluto was in Capricorn should also be mindful of this – especially women who feel that they can have more respect and success by hiding their emotions. This is something that all Capricorns may be conscious of, and it is important that no gender makes the choice to completely cut themselves off emotionally, or to become convinced of the delusion that no one else will understand their feelings.

Pluto in Capricorn In Love

It would, of course, be short-sighted and faulty to say that no one in this time cares about romance or relationships. There are so many other factors influencing an individual’s interest in relationships – everything from their Sun sign and Venus sign to their childhood experiences and their true individual personality.

Capricorn is generally a sign that sees romance as a partnership against the world. Perhaps the best representation of Capricorn’s feelings is the Victorian poet Matthew Arnold, who wrote “Ah, love, let us be true to one another! For the world, which seems to lie before us like a land of dreams, so various, so beautiful, so new, hath really neither joy, nor love, nor light.”

This view doesn’t exactly devalue romance, but it certainly devalues everything else surrounding the romance!

Anyone who falls in love with a Plutonian Capricorn needs to be aware that, at least to some extent, this is likely to be their thought process. Their expectation is likely to be that you will stand by them to weather difficult times. If this sounds depressing to you, you might want to think about looking for someone just outside the age bracket. Of course, it isn’t the case for every single person born within this range of years, and attitudes like this can also be changed, but that’s likely to be what you’re starting from.

All of that might have sounded a bit bleak, but once you’ve gotten into your relationship and understand each other’s feelings and priorities, someone with Pluto in Capricorn will treat your relationship with the commitment and gravity that they afford to everything else in their lives.

Dates for Pluto in Capricorn

Capricorn is one of the five signs of the zodiac with two periods of Pluto that we are able to accurately determine. The first phase of Capricorn started 255 years ago, in 1762, and lasted 16 years, and this period, which began in 2008, will last another 16, until 2024.

Anyone born with their Sun in Capricorn can take this period of 16 years to achieve great success, and get some achievements “under their belt” so to speak, to help propel them through coming eras. Other signs can do something similar, although their energies will not be quite as synergistic with the spirit of the times as Capricorn’s will be at this present moment.

For those born with Pluto in Capricorn, be conscious that the upcoming stretch, when Pluto is in Aquarius (from 2024 to 2044) is likely to present you with some challenges. The energies of Capricorn and Aquarius can make for a volatile combination, as Capricorn’s grim and hard-working nature mixes with Aquarius’s unconventional attitude, which is sometimes indifferent to the feelings of others.

Especially when Pluto, the planet of transformation, is the planet at hand, this can lead to some periods of rocky transition, and Capricorns will be caught up in the mix. This will be the period when your attitudes towards the world are truly hardened, and this is the time when naturally cynical personalities become truly embittered.

However, there will be a period of calm to come, when Pluto shifts back into Pisces, so you can always simply wait for that. The energy of Pisces is more relaxed, thoughtful, philosophical, and spiritually insightful than the previous signs, meaning that it is a more comfortable and healthier place for a Capricorn to be “at rest” than the Aquarius period.

People born with Pluto in Capricorn may be a little young to be currently concerned with such matters as how their historical context will affect them in the future, or even things like what patterns they’re likely to fall into in relationships. However, these questions and circumstances will bubble up over time, as people born in this age range become more conscious of what is happening around them, and what they see both themselves and their peers doing.

We can hope that Capricorn develops in a healthier way than it did last time, since at the current time, a revolution on the scale of the American Revolution or the French Revolution could be completely detrimental.

However, we need to prepare ourselves for the fact that a volatile mix of astrological signs is on the way. It will be possible to weather that period of signs, but it is going to be a challenge.

One way that we can perhaps rein ourselves back in when we are prepared to go over the edge is by remembering that whatever we do in the coming few years is going to affect the people born while Pluto is in Capricorn, and they are going to be the voice of the future for decades to come.

Think about how effective your average Capricorn is at getting what he or she wants. Considering how good this group is at achieving what they want to happen, it is in everyone’s best interest to ensure that they grow up healthy, well-adjusted, and not too bitter or cynical.