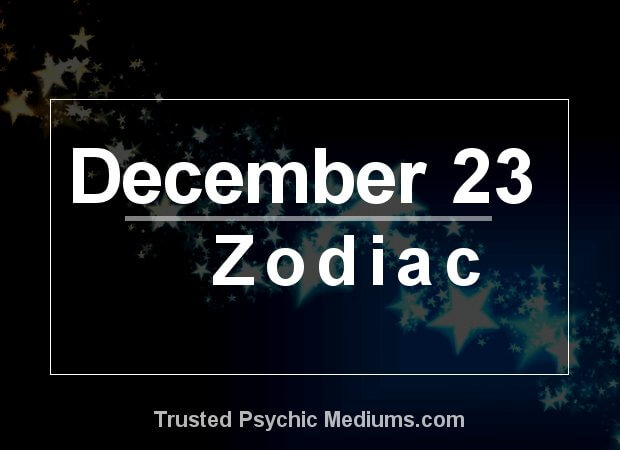 What is your Zodiac Sign if you were born on December 23?

If you were born on December 23rd, your Zodiac sign is Capricorn.

As a Capricorn born on this day, you are understanding, sweet, and sympathetic. You are a good communicator and you work well in any social setting.

Your friends look up to you because of your sophistication and elegance.

Lovers born on December 23rd are generous to their partners. They like giving gifts. They also make sure that they give their lovers enough time and affection.

To attract a Capricorn born on December 23rd, you should be an interesting person. It’s also important that he or she sees that you are concerned with his or her family.

Don’t get me wrong. While you do like giving gifts and receiving gifts as your primary means of measuring emotions, gifts come in many shapes and forms.

In many cases, the best gift that you can give somebody is your time. If you think about it hard enough, your time is actually your most precious asset.

Stuff can just be bought and sold. That’s the bottom line. Stuff is easily replaceable. Time, on the other hand, is priceless. Why? Once one minute is gone, that minute is not going to come back.

You either have to rent somebody else’s time or become more efficient so you can squeeze more value out of your existing time. But the time you spent is gone for good.

Keep this in mind when looking to give gifts and looking to receive gifts.

A lot of Capricorns born on the 23rd of December tend to be quite materialistic. This should not be a surprise because the Capricorn in a classic earth sign.

However, it also has an emotional side. Remember, the Capricorn is a mythical creature that is part goat and part fish.

While a lot of the things that you do are practical, earth-bound, and material, you also have an emotional side. This is why it’s really important for you to not let your emotions get the better of you.

Don’t focus too much on material gifts and material things, and try to equate them with emotional rewards. Just see them for what they are and move on.

People born on December 23rd are skillful and sharing people.

They love to be in situations where they can teach others. They get their fulfillment when they see other people achieve their own dreams.

A career as a writer or PR specialist is well suited for people born on this day. You are an atypical Capricorn because you look at your success in collective terms.

You tend to focus on the team instead of the individual. You feel that you’re getting ahead precisely because people you’re associated with are getting ahead.

This doesn’t mean that you are ready, willing, and eager to take a hit for the team. You don’t need to be a hero. You just need to do your job, and your team is sure to benefit. Keep it at that level.

People born on December 23rd are selfless individuals. They take pleasure in seeing other people succeed, especially those they have helped.

They are also polished people and they are protective of those that they love.

Positive Traits of the December 23 Zodiac

A person born on December 23rd is practical and realistic. He or she knows if something will not work or if the goal is unrealistic.

They then look for alternatives or do something that is more achievable.

Negative Traits of the December 23 Zodiac

People born on this day are childish and disorganized at times.

They can get angry about the simplest things. These people are also prone to having mood swings.

As a Capricorn born on December 23rd, your element is Earth.

Earth represents sensitivity. People who are influenced by this element usually think about how others feel. It also symbolizes permanence and commitment.

People born on December 23rd  are influenced by the planet Saturn.

My Top Tips for Those with a December 23rd Birthday

You should avoid: Being careless about your personal belongings.

You should also avoid being too moody since you can hurt people around you without realizing it.

If you were born on December 23rd, your lucky color is Orange.

Orange reflects the need of being with other people. This color influences an individual’s social skills.

It also represents the need of people to feel accepted and appreciated by a social group. People who are governed by this color also love to take on new challenges in life.

This Gemstone is Perfect for Those Born on 23rd December

Yet it’s the Capricorn gemstone, garnet, that best aligns with your energy, more often than not.

The rich red of this stone and the sense of prestige it exudes indicates you as someone who is going places, and with a fiery ambition behind your calm exterior.

The colour of garnet is also closely aligned with the root chakra, and with that comes a sense of anchorage to the physical world that lets you do your best work – as well as indulge in your most enriching of pleasures.

This stone will calm and soothe you when your worries become too much.

Final Thought for the December 23 Zodiac

As a person born on the 23rd of December, you’re someone who is highly sensitive of other’s feelings. This is a great characteristic because this prevents you from overstepping others.

Keep on being positive and you will surely find success in any venture you enter.