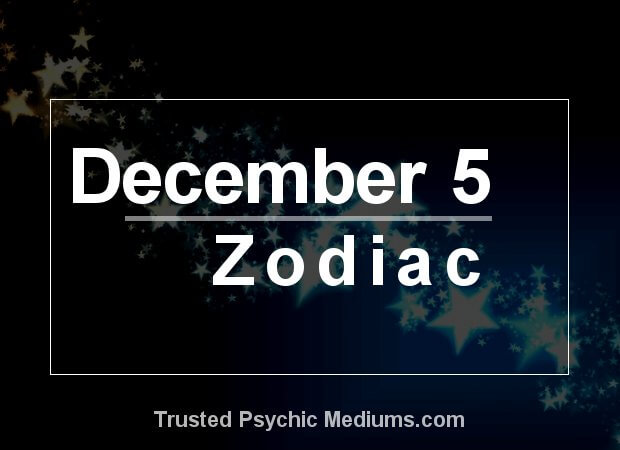 What is your Zodiac Sign if you were born on December 5?

If you are born on December 5th, Sagittarius is your Zodiac sign.

As a Sagittarius born on December 5th, you are magnetic and seductive.

People born on this day also hate stupidity. For them, the ability of other people to use their common sense is very important.

These people tend to ignore others who don’t have the same intelligence level as they have. They believe that these kinds of people will just drag them down.

However, when it comes to friends and family, they are very generous and protective. Their friends would say that they are highly reliable.

They would go through miles to help people who are close to their heart.

You hate all forms of stupidity precisely because you have high standards regarding proper deportment.

You have this picture in your head of what people should say and when they should say it.

While in most cases your instincts are spot on, there are also many situations where you come off as overbearing.

While you do command quite a bit of respect because you are perceived as intelligent, people might find you toxic.

The thing you need to realize is that in most cases, it doesn’t really matter how smart you are.

In fact, according to many studies, the main driver of actual life success is not IQ, but emotional intelligence.

Instead of sticking blindly to your standards, focus more on when to apply them. Also, pay attention to who to apply them to.

Once you’re able to make progress with this, you would achieve better results from your social interactions.

People born on this day are adventurous when it comes to love. They are also full of ideas and tend to always want to spend time with their lovers.

However, these people have the tendency to be jealous at times. Since they spend time with you, you should also be willing to do the same for them.

So you can capture the heart of someone who was born on December 5th, show interest in what they do and give them enough attention.

If there is any one drawback to your romantic life, it’s your tendency to be inflexible as far as your expectations of your romantic partners go.

You tend to imagine certain images that they have to live up to. You tend to focus too much on emotional standards that you set up.

You have to respect your romantic partner enough to allow them to have their own standards.

Indeed, if you insist that they have to subscribe to your own definitions and values, it becomes obvious that you don’t really love them for them.

You have to remember that the bedrock of any kind of romantic relationship or emotional intimacy is acceptance.

This is all but impossible because you’re constantly trying to impose your own values and expectations on them.

Remember, they don’t exist for you, and nor do you exist for them. Romance is supposed to be a partnership of equals.

People born on December 5th are brave and are highly adaptable. They blend well with all kinds of people.

They are also task-oriented, and a career in web development is highly suited for them.

Their employers will say that they can handle complex tasks and do these flawlessly.

You can look at people like Walt Disney as an inspiration. He’s one of the well-known personalities who share the same birth date as you.

Your focus on standards is what makes you an excellent service provider or talent authority in your field.

You have an impeccable sense of taste. You know whether something is right as far as quality goes. More importantly, you would not rest until you meet that high level of quality.

They know that you have these high standards. They know that they can rely on those standards to get products and services that are beyond their expectations.

Not surprisingly, this can lead to tremendous career and business opportunities. People are drawn to excellence.

While it’s easy to think that people would rather buy cheap stuff and get more value for their money by spending as little money as possible, people are also drawn to quality.

Believe it or not, people wouldn’t mind spending a little bit more to get something that is truly of high quality.

Always remember this so you can stick to your principles.

People born on December 5th are proactive people. They’re never hesitant to take charge as long as it’s for the good of whatever situation they’re in.

They are also highly competitive and will go through miles just to get the job done.

Their friends see them as someone who puts their heart in everything that they do. They are also caring individuals.

Positive Traits of the December 5 Zodiac

People born on this day may appear laid back at first glance, but they are highly serious individuals when there’s something that they want to achieve.

They don’t boast around and tell people their achievements. That’s why a lot of people get surprised at the things that they are capable of.

Negative Traits of the December 5 Zodiac

People born on December 5th can be foolish at times and they don’t realize it. They can also be pragmatic and imposing.

As a Sagittarius, Fire is your element. This element exudes power and persistence.

It is evident in people who are influenced by this element that they will stop at nothing to achieve their goals.

Jupiter is the ruling body of Sagittarius. Jupiter demonstrates freedom.

People who are influenced by this governing body have strong personalities. They are also highly ethical and have a strong sense of justice.

My Top Tips for Those with a December 5th Birthday

You should avoid: Being too reckless in making decisions

The lucky color for those born on December 5th is Turquoise.

This color symbolizes a need to establish a balance in your life. You want peace and you want adventure at the same time.

It also expresses your hopes and dreams and your ability to be idealistic about the things you really believe in.

They say that a friend in need is a friend indeed, and that helps to make the Sagittarius person born 5th December among the friendliest around.

This star sign is one of altruism and compassion, and of doing good deeds for their own reward – especially if there’s entertainment value in it!

Because of this, nobody born on this day can resist helping those who are downtrodden, who have been taken advantage of, or who have been victimised by circumstances beyond their control.

These 5th December souls will use their limitless fiery energy to put things right.

Of course, one must always be careful not to overdo it and give to excess – neither to fall for people selling a sob story to get one over on them. Luckily, these instances are few and far between.

Final Thought for the December 5 Zodiac

If you are a person born on December 5th, you should be able to strike a balance on both the positive and negative traits of a Sagittarius.

Keep your goals straight and continue to be positive about the things that you do and you will surely attract success in your endeavors.