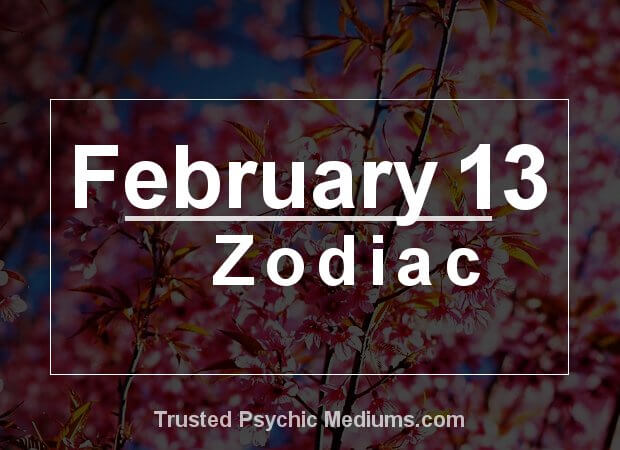 What is your Zodiac Sign if you were born on February 13?

If you were born on February 13th, your zodiac sign is Aquarius.

As an Aquarius born on this day, you are full of ideas, and this motivates you. You get a tremendous amount of energy from things you choose to believe in.

Your definition of a good life involves believing in the right principles and developing the right character. You often won’t stop at anything until you achieve certain objectives.

Your biggest challenge also involves ideas. You have a tough time committing to any one idea. You tend to drift from one idea to another, based on how motivated you are.

Lovers born on February 13th tend to be idealistic in terms of their emotions.

You have a fixed set of what love should look like and feel like. If you find yourself getting close to somebody, you often refer, what you’re feeling and seeing, to these ideas.

You overlook and end up ignoring potential relationships because of these unrealistic expectations.

You are best suited for life as inventors, innovators, and cutting-edge entrepreneurs.

You are an idealist. Once you have a clear idea, it’s very easy for you to get motivated and pour everything you have towards that idea.

The only challenge for you is to be motivated by the right idea. You shouldn’t wait until inspiration strikes you; instead, you should work on a skill, perfect it, and then get motivated.

You may also find this interesting:  February 3 Zodiac

At a young age, these Aquarius natives tend to be quite carefree and boundless.

You have a tremendous sense of possibilities. You live in your own world of ideas.

As you get older, you become more stubborn. It takes a lot more effort for you to let go of unproductive or corrosive expectations and assumptions.

You hold on to things you shouldn’t be hanging on to. You lose a lot of your sense of wonder and possibility.

Positive Traits of the February 13 Zodiac

One trait you have that outshines everything else is your loyalty.

The moment you give your word to somebody, you will surely do it regardless of what you need to do.

It’s not about pleasing others, but because it’s personal to you. You feel that your principles, and your character are what’s most important in your life.

Negative Traits of the February 13 Zodiac

You have a tough time getting motivated by the proper idea. This gets harder for you as you get older. You often let your past idealism dictate how you choose to respond to the present.

Air is the paired element of the Aquarius born on February 13.

Air is fleeting. It occupies a large space, and moves really fast. These are the three traits of air that are most reflected in the ideas that you tend to hold on to.

Uranus is the ruling planet of all Aquarius people.

It is also the strangest planet because it has a very interesting gravitational pull. It is deep, mysterious, and it can reflect a lot of idealism and sense of possibility. However, its pull can also be so restricting that you don’t have much room to maneuver.

You may also find this interesting:  February 11 Zodiac

This aspect of Uranus is manifested in your beliefs you choose to subscribe to.

My Top Tips for those with a February 13th Birthday

Avoid taking yourself too seriously. There is such a thing as an outdated idea. You have to challenge the things you assume to be true actively.

The lucky color for those born on February 13 is represented by black.

Black summarizes your personality. It’s cool, calm, and possesses a tremendous power in the form of potential.

However, for black to unleash its power, it has to turn into another color. You need to let go of your motivating ideas for their positive side to become manifested in your life.

While Jerry Springer, born on 13th February as an Aquarius, has had a varied career indeed, he’s most well known for his long career as the host of an often outrageous talk show.

Yet even among the drama and hi-jinks that often occurred on his show, as well as a growing number of wacky guests who showed up over the years, Jerry Springer always kept a level head.

You may also find this interesting:  February 24 Zodiac

He became well known for advising his guests to take care of themselves, and one another.

Someone who shares their birthday with Mr Springer can expect to find themselves similarly drawn to the role of mediator in life – but hopefully with less explosively dramatic results than those seen on the Jerry Springer show!

However, there’s a talent for bringing conflicting ideas and opinions together in the 13th February zodiac that’s a wonderful influence when it comes to bringing peace and harmony.

You, dear 13th February zodiac, are a friend to all people, whatever their background and walk of life, and that tolerance is rare and special in today’s world.

Final Thought for the February 13 Zodiac

Aquarius people undeniably have what it takes to be successful. The problem is they often become too connected and stuck with certain beliefs that may have worked in the past.

Their stubbornness can be their undoing. Learn to let go.