Aquarius: Three Signs Your Relationships are Making You Anxious and Unhappy 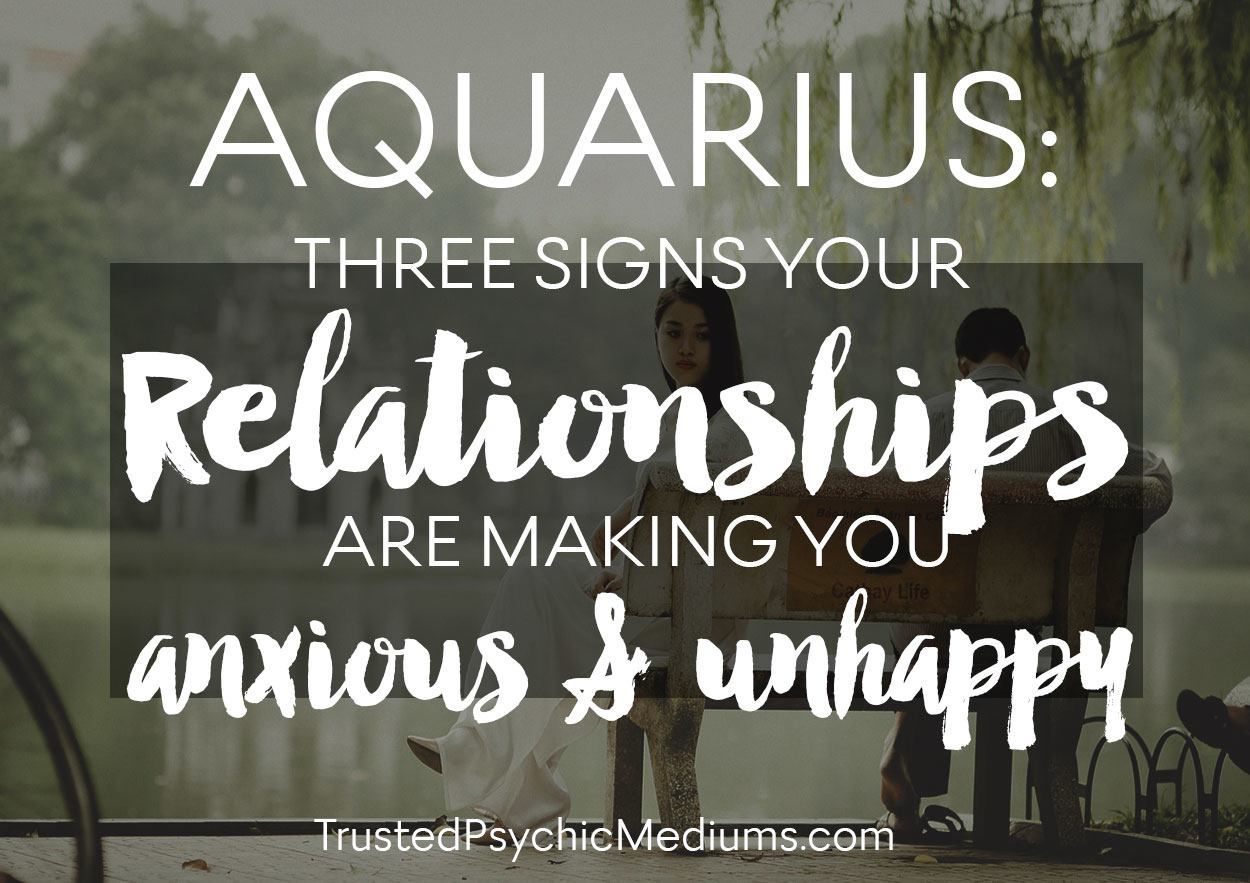 If you are an Aquarius, it’s very easy to fool yourself into thinking that you’re in an ideal or good relationship. It really is.

Aquarius people live in an emotional fairyland. If they want to fall in love, they believe in emotional ideals.

This is the reason why a lot of their relationships are never as happy as they could be.

This is why many Aquarius love relationships fall apart eventually.

We’re not talking about falling apart in dramatic terms. In fact, you can be in a relationship that lasts your whole life, but in reality, it has fallen apart.

Normally, this takes the form of achieving a certain level of intimacy and never progressing past that point.

It’s as if there is this emotional no man’s land right in the middle of your relationship where neither of you can go to.

This truly is a tragedy because everybody deserves love, the best relationship, and to feel complete.

Unfortunately, if you believe in certain emotional ideals, you only have yourself to blame for your personal unhappiness.

You’re not doing yourself any favors when you imagine things that are not there.

When you try to constantly read positive signals into your relationship, you’re only doing yourself a disservice.

As I’ve mentioned earlier, you are simply blinding yourself to the real state of health of your relationship.

If you are serious about making a break from the anxiety and unhappiness that you’re feeling, you need to pay attention to three key signs.

These are three signs that your relationship is making you anxious and unhappy. If you’re able to recognize these signs, you can then make progress in terms of communicating with your partner.

Maybe by laying out the right ground rules and the right rules of engagement, you can achieve a higher level of intimacy and happiness.

Your partner can’t seem to get it together

Don’t think you are just being overly hard on your partner. If you see that your partner has objectively given up or can’t seem to get his or her act together, this may indicate something is wrong with your relationship.

It is not just about him or her.

If your partner feels that they can always screw up around you and not have to worry about consequences, this is a serious problem.

At the very least, it indicates that they are taking you for granted. They feel that they can screw up without any consequences.

They feel that you wouldn’t really put up a fight or make much of a fuss if they constantly drop the ball.

We’re not necessarily talking about big, dramatic blow-ups or scandalous issues. It can be as simple as always forgetting your birthday or your anniversary.

If you noticed that this person is extremely thoughtless around you, this can indicate that this person has written you off. This person might feel that regardless of how he or she screws up, you’ll always accept them.

You’ll always be there to read the situation in the best light possible and forgive.

In many situations, forgiveness is the last thing your relationship needs. In many cases, you have to call people out.

It’s a reflection of your emotional responsibility to each other.

If you’d noticed that your partner is constantly screwing up and not doing his or her share in the relationship, this is a clear sign.

At the very least, this is a key indicator that their behavior is impacting your happiness.

You have to put your foot down. You can’t let that go on forever.

You keep thinking of past relationships

Another way you can make yourself unhappy and anxious in your current relationship is to constantly think of past relationships you’ve had.

This often happens because people compare their current relationship with “the one that got away.”

Let me tell you right now, if you constantly compare your current relationship with past relationships, you’re only making yourself unhappy.

Just like with anything else in life, comparing yourself is a surefire way to be frustrated and sad. Even Bill Gates would be miserable if he constantly compared himself. Why?

We have strengths but we also have many shortcomings. When you constantly compare yourself to other people, you only dwell on your shortcoming.

You only tend to focus on the things you’re missing.

The same applies to your relationship. If you’re constantly comparing it to past relationships, it’s very easy to conclude that your current relationship sucks.

Even though you feel that you cannot leave the relationship because there might not be anybody better out there, this definitely can lead to a lot of unhappiness.

Do yourself a favor and stop comparing. In fact, you should stop thinking of past relationships altogether.

You’re convinced you are happier in a past relationship

This is a natural extension of the previous factor I outlined above.

If you’re constantly comparing your current relationship with a past relationship, you would often come to the conclusion that you were happier back then.

You would come to the conclusion that the previous partner of yours was a better fit for you.

Well, you’re not really doing yourself much good if you’re constantly thinking of that.

If anything, you’re robbing yourself of happiness by always looking back at the past. You’re holding up your current partner against an impossible standard.

The truth about past relationships and people from your past is that they are not who you think they are. The human mind has an incredible ability for making things appear better than they really were.

If you’re completely honest with yourself, there were serious issues with your past relationships.

That’s why they are past relationships.

There was something about them that made them implode. If you are able to reach this level of honesty, then you would be able to stop thinking about past relationships.

Regardless, being convinced that your past relationships were happier is a sure sign that you are extremely unhappy with your current relationship.

7 Little Known-Facts About Aquarius and Relationships

As most people want to know as much as possible about their star sign and how it relates to relationships, then it makes sense to study different facts that surround the star sign with this part of life.

By looking at the facts that are related to Aquarius and relationships, you will be in a position to have a better understanding of how your star sign could change the way in which you look at this part of life.

1. It is all about a mental connection.

For Aquarius, the mental connection will prove to be the most valuable part in all of this as that is the area that they tend to focus on as much as possible.

If the minds do not connect or meet one another on a level footing, then their general interest in the relationship is going to wane.

2. You take your time to commit.

Somebody under this star sign is going to often be rather slow to commit to things, but that should not always be viewed in a negative way.

Instead, it is more a case of them wanting to make sure that when they do commit that it is with the correct person rather than discovering that they have made a mistake later on.

3. A friend first, then more later.

It will often be true that Aquarius is going to find it difficult to form a serious romantic relationship with someone if they have not even reached the stage first of being a strong friend.

This links in with their reluctance to commit straight away as they are going to want to build a friendly relationship before taking it to the next level.

4. You will try even when you know you will fail.

Aquarius loves to chase after a lost cause in their relationships, so they will try to do things even when they know that the chances of it being a success are going to be minimal.

They live by the mantra that it is best to even just try rather than not bothering at all.

5. A relationship can feel slightly superficial.

One potential problem with being in a relationship with a member of this star sign is that the relationships can come across as being slightly superficial.

This can be due to the apparent randomness of conversations at first, but as the person commits, then there will be a clear change.

6. You never know what they will say or do next.

This kind of relationship is going to be one that keeps you on your toes as you can never be sure as to what they will say, or do next.

While this can be disconcerting at times, there is something about it that keeps you coming back for more leading to a feeling of you being somewhat addicted.

7. After they commit, they are deep lovers.

Once they commit to a relationship, you can expect things to become rather deep and intense. All of the superficial things are thrown to one side and things will develop rather quickly at this point.

Aquarius is a rather peculiar sign with relationships as it just feels as if it can move from one extreme to the other in the blink of an eye. At least with this, it can never be boring.