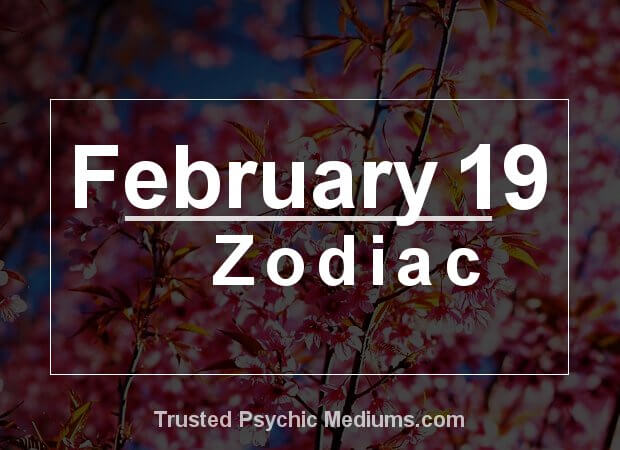 What is your Zodiac Sign if you were born on February 19?

If you are born on February 19th your Zodiac sign is Pisces.

Pisces natives born on February 19 are highly emotional person. Now, a lot of people might consider this a negative trait. It is actually a source of strength for you. Why?

The fact that you look at the world in purely emotional terms enables you to practice empathy.  You are a very sympathetic person.

You really go out of your way to step into people’s shoes and look at the world from their perspective.

Now, unlike the Aquarius who practices empathy-based primarily on ideas, your empathy uses a different cornerstone.

You are able to step into other people’s perspective primarily from an emotional angle. This makes you a very sympathetic person.

You are also very gentle and nurturing. It is natural for you to try to have other people’s best interest at heart.

Your big challenge is to establish firm boundaries between other people’s interest and well being and yours.

Believe it or not, there are firm boundaries that you should stick to otherwise, you might end up hurting yourself as you try to serve and protect others.

Lovers born on February 19th are hopeless romantics. You truly believe that there is such a thing as love for love’s sake.

Your big challenge is to avoid extreme idealism when it comes to your emotional state. You have to remember that as loving and caring as you are, not everybody is like this. I wish it was that way.

In reality, there are people out there that would love to take your kindness, generosity, and nurturing, and give very little back.

This probably comes as a shock to you but yes, those people do exist.  You should do yourself a big favor and make sure that whoever you choose to fall in love with, deserves your love and affection.

Since you are a very caring person, you have no shortage of options. Members of the opposite gender quickly see what you have to offer and they are attracted to you.

Don’t just fall for the very first person to return your affections. A little bit of advanced thinking and logic can help you decide on who to trust your whole being with.

Those with a birthday on February 19 are very intuitive and imaginative people. You have a way of using your emotional imagination to get any kind of reading on any kind of social situation.

Even if somebody just looks at you, you would be able to feel certain vibes and make the right call. This operates in such an automatic way that it can frankly be scary.

This is why people born on February 19 are best suited for jobs like psychiatry, psychology, and a whole lot of other related fields.

You have a deep intellectual capacity, and you will probably do well in any trade. As long as you pick something that engages your emotions then you should be on the right track.

Pisces people born on February 19 are very outgoing people. They are outgoing not because they want to get things from other people.

It’s not like you want to meet new peole based on what they can do for you. You are genuinely interested in exploring other people’s emotional state.

You love other people because you easily put yourself in their shoes. You would love to see the world from their perspective. This is why you really look forward to meeting a wide range of people.

You are a very open minded person. Even if a person looks quite different from you, and they speak a different language, you view this as a tremendous oppurtunity.

Positive Traits of the February 19 Zodiac

You are a very gentle person. A lot of people say that you are compassionate and kind-hearted. Not surprisingly, you would make for a great friend.

You also like to entertain people with your artistic and musical talents.

On top of all this, your inclination for sympathy and compassion can help you establish a name. Word does get around. When people are looking to be encouraged and nurtured, they look to you.

Negative Traits of the February 19 Zodiac

Pisces people born on February 19 have one big challenge. As mentioned above, there are certain kind of people in this planet who repay kindness with harm.

I know this is probably going to bother your mind. This probably doesn’t make any sense to you, but this is absolute reality.

You need to make sure you understand this because you, by nature, is highly emotional,, moody, and in many cases, indecisive. If you have those toxic people in your life, they can unsettle you.

Your natural unpredictability and indecisiveness might get the better of you.

Do yourself a favor and try to rank all your friendships based on how beneficial they are to your mental and emotional state.

If you believe that you are in certain friendships that are toxic to you, don’t hesitate to put them on a lower tier of friendship.

This doesn’t necessarily mean that you have to cut them out of your life, what this does mean is that you are positioning them in such a way that they are less likely to harm you.

Water is the paired element of Pisces people born on February 19.  Accordingly, Pisces people tend to be in a constant fluid state of affairs.

It seems like, regardless how settled yesterday may have been, you really can’t expect your mood to remain the same the day after. That’s just who you are.

The sooner you are able to embrace your natural moodiness, the happier you would be. There is nothing wrong with you.

There is nothing wrong with going through mood swings. Let’s put it this way, there are many different water signs out there and they do well despite the fact that they can be quite emotional.

Neptune is the ruling planet of people born on the 19th of February.

Neptune is of course a watery planet. It is known for its remoteness and its association with fantasy.

You tend to live in your own little fantasy world when it comes to your emotional state. You often have ideals regarding emotions that may not translate well.

My Top Tips for Those With a February 19th Birthday

You should avoid: being too emotional. Try to stand your ground. Try to recognize people who take and take without giving anything back.

Again, you don’t have to cut these people out of your life, you just need to recognize who they are and treat them accordingly.

The lucky color for those born under February 19  is represented by the color purple.

Purple throughout history has been associated with royalty. There is something regal about how you carry yourself.

People can’t help but be impressed because of your deep level of compassion and sympathy.

Still, there is a hidden side to you. The Pisces, after all, is symbolized by two fishes going into two different directions.

The sooner people think that they have you figured out is the sooner you give them a pause. They quickly realize that there is a completely different side to you. This is not necessarily bad.

In astrology, one’s own birth month is often seen as a rather lucky time, when the energies of the universe are strumming the same tune as you do every day.

It’s definitely a fortunate time for those born within the 19th February zodiac arrangement, in every walk of life.

Nevertheless, the energy of the Aquarius month of February is a somewhat flighty one, and is always seeking the new and non-traditional.

As you might imagine, this means that something like marriage, one of the biggest traditions there is, meshes poorly with this energy.

People born on 19th February ought to avoid a wedding that takes place during this same month – yes, that unfortunately even means Valentine’s Day.

A restless kind of energy will infect the relationship that is ‘born’ from the February marriage, making it hard to make last.

As an aside, you’re even advised to avoid proposals during this month too, for similar reasons.

Don’t be surprised if an act of commitment like proposal or marriage in February causes a sudden period of suspicion, bickering and longing for freedom in both partners in the 19th February individual’s relationship.

Final Thought for the February 19 Zodiac

It is kind of difficult for these people to be figured out.

As mentioned above, you might think that you already have them figured out and all of a sudden something happened and a completely different aspect come up.