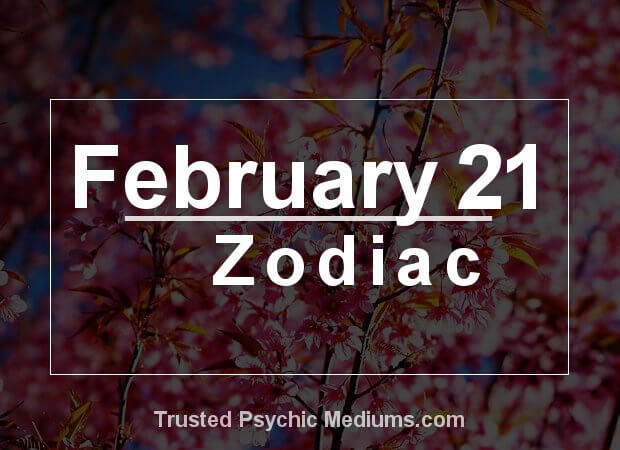 What is your Zodiac Sign if you were born on February 21?

If you are born on February 21st your Zodiac sign is Pisces.

As a Pisces, you are a very emotional person. This goes with the territory, after all, the symbol for Pisces is the fish. It lives in the water, water is by nature emotional and unstable.

Along with this emotional state is your tendency to be impressionable. You really give people the benefit of the doubt. You are so empathetic that a lot of people think that you are gullible.

What you’re really doing is that you allow yourself to be vulnerable because you really want to reach out to people.

Sadly, you also have a deep sense of kindness that tends to be abused by people that you are helping. This may sound harsh but this is reality. Why?

Those people would take without limits and give very little back. I mean, that is the most positive aspect of those people because, guess what, in many other cases, they would repay whatever positivity and kindness you display to them with abuse.

Believe it or not, such people do exist. Accordingly, when things go south, you blame yourself. You wallow in self-pity and oftentimes your confidence takes a hit.

Do yourself a big favor, and realize there’s nothing wrong about you. The fault lies with them.

Lovers born on February 21st are very romantic. In fact, they are such incorrigible and hopeless romantics that they often fall for the wrong people.

You have to remember that throughout your lifetime, you will attract the romantic attention of a wide range of people.

Be very selective, because there are people out there who would treat you like you are an emotional doormat.

I know this is probably going to bother your mind, and that this may take you by surprise, but this is the truth.

You can’t live your life wearing rose-colored glasses and expecting only the very best from people.

I wish that was the case, but unfortunately, most people live life-based on the guidance of their better angels. Instead, in many cases, it’s every man for himself.

This means, people often repay kindness with meanness and even outright anger and harm. Don’t become a martyr.

Those with a birthday on February 21 tend to take on a lot of work for the team. They feel that they are doing their team members a big favor by doing most of the work.

While this can help you become an indispensable person, this can also be very frustrating. Why?

There are certain people who never work and take credit for whatever accomplishments you achieve.

That’s the way things are. In many cases, your team would progress, and you are the one who’s spending all those long hours at the office and not getting enough acknowledgement.

It’s not uncommon for people born on February 21st to be left behind by people who actually know less and are less competent than them.

Do yourself a favor, and make sure that you get appropriate credit. Don’t hesitate to claim the status and the acknowledgement that is yours.

With that said, people born on February 21 tend to be great athletes, social workers, and lawyers.

People born on this day generally trust their intuitions and feelings. You have a strong romantic intuition and in many cases, they turn out to be quite right.

However, you can’t bank on this. When it comes to the things that count, sometimes your intuition lets you down.

Sometimes you end up in relationships that are so imbalanced that you are really wasting your time.

I am, of course, talking about friendships and romantic relationships where the other partner gets all the benefits and you get all the hassles and responsibilities.

Stop getting into those imbalanced personal relationships because you deserve better.

Positive Traits of the February 21 Zodiac

People born on February 21 are very kind, loving and truly care. In most cases, people are so selfish and so self-absorbed that they really don’t get around to caring genuinely about other people.

You don’t have that problem. You are an other-centered person. This is an amazing gift. Make sure you use this gift on the right people.

Negative Traits of the February 21 Zodiac

People who are natives of the February 21 zodiac tend to hang on to imbalanced romantic relationships and friendships for far too long.

While a little bit of imbalance is not necessarily a bad thing because most people get into them, but it is a very negative thing if you know that you are in an imbalanced relationship.

Believe it or not, you are deserving of the very best from your friends and romantic partners. Don’t let your low self-esteem get the better of you. Insist on your right.

If you feel that your relationship is so imbalanced that it’s causing you harm, try to reduce it to a lower tier, or keep an arms length away from that friend.

You are not doing yourself any favors hanging on to these toxic relationships.

Water is the paired element of the Pisces. This should not come as a surprise. Water is by nature volatile. It’s highly fluid, and it changes all the time.

It’s very hard to achieve some sort of solidity with water unless you freeze it.

The worst part to all of this is that they often blame themselves for things that go wrong with the relationships.

There’s nobody to blame. You are who you are, and people around you are who they are. Just accept that fact and live with it.

This planet has historically been associated with idealism, sensitivity, compassion, and intuition. It also involved a lot of imagination.

So you can do quite well in life if you tap into empathy, compassion and imagination that your Neptune nature brings to the table.

My Top Tips for Those with a February 21st Birthday

You should avoid: toxic relationships. It’s probably going to be very hard for you, after all, you feel that a little bit of love is better than nothing at all.

Well, with that type of mindset, don’t be surprised if you go from one failed relationship to another.

You are worth more than other people’s validation. Learn to accept and love yourself, and you will go quite far in life.

The lucky color for those born under February 21  is represented by the color violet.

Violet is a rare color, and its rarity is definitely manifested in your tremendous sense of compassion, and generosity. You give readily to other people.

You would even give them your most important asset. And that, of course, is your precious time. Pick the right people to invest your time in.

People who celebrate their birthdays on 21st February enjoy the benefits of both Aquarius and Pisces energy, and how much each star sign has an influence over your life depends greatly on how these energies are spread on your in-depth birth chart.

Nevertheless, there’s often a strong romantic side in you, and a tendency to want to mate for life with someone loving and loyal, but also free-spirited and interesting.

It stands to reason that a fellow Aquarius could well embody those energies, but perhaps think twice on that choice.

Aquarius people without the added Pisces influences that someone born on 21st February enjoys are a little more prone to being easily bored and emotionally distant than others.

What’s more, Aquarius people don’t like excessive emotional displays, which the Pisces in you can’t help but feel bubble up from time to time.

The good news though, is that that leaves plenty of other options out for the taking, dear 21st February zodiac – just try not to date someone whose apple hasn’t fallen far from the tree that is your birthday!

Final Thought for the February 21 Zodiac

Pisces people born on this day are individuals who can easily be mistaken for clingy and needy individuals.  This is not entirely fair.

You are actually a very giving person. You love to heal people. You love to be there for them. This is all well and good, but make sure you pick the right people to be loyal and caring to.