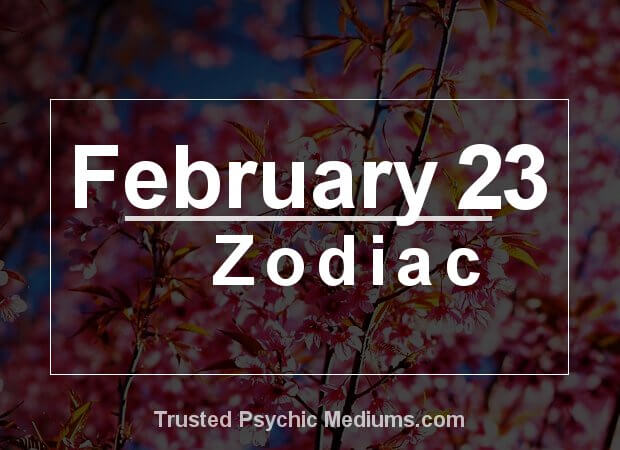 What is your Zodiac Sign if you were born on February 23?

If you are born on the 23rd of February, your zodiac sign in Pisces.

As a Pisces born on February 23, you are a very socially popular person.

It seems like it’s very difficult to find somebody who would have anything against you. You have this natural ability to get on the good side of people.

It’s not like you need advanced research to figure out what they want to hear. Things just come natural to you. You often say the right thing to the right people to produce the right results.

You are a very gentle and easygoing person.

You often are able to say what would otherwise be very offensive and upsetting information in a way that people would not only perceive it positively, but in many cases actually welcome it.

You are able to see through any kind of social situation. You read people like a book.

The reason for this, of course, is that you are very in touch with your emotions. You understand that despite surface appearances, people are very emotional in nature. You use this to your advantage.

The bad part is that in many cases, you can be quite a manipulative person. Since you know how people operate emotionally, you know that there are certain words that can trigger certain emotions.

While you try to resist the temptation to use this to your advantage, you can’t help but take advantage of emotionally vulnerable people from time to time.

Of course, you try to justify this by saying that you’re doing it for their own good. But let’s face it, in many cases you define what’s good for them based on what’s good for you.

As you mature, you would realize that people have a right to their own emotional state without manipulation or self-interested influence.

This is the key to you developing mutually beneficial relationships.

Those with a birthday on February 23 make for great leaders.

True leaders know that it’s not what you know that counts. It’s not whether you know technical information or management techniques.

What truly matters is that you are able to communicate in such a way that it resonates in an emotional level with people. You understand that at some level or other, people are emotional.

People do make a big game about how logical and reasonable they are, but the bottom line is that they tend to make decisions based on how they feel.

You understand this and you often use it to your advantage.

As your career matures, you would realize that you would get further in life if you focus on what’s good for the group instead of agendas that only benefit you primarily.

You are a very easy person to get along with. In fact, if you find yourself in any kind of social situation, people often have a very favorable view of you.

Positive Traits of the February 23 Zodiac

If you put your mind to it, people like yourself who are born on February 23 can be quite charming.

In many cases, you are able to communicate in such clear terms that enables people to achieve more than if they were to operate independently.

Of course, this has a positive side and a negative side.

Negative Traits of the February 23 Zodiac

People born on February 23 may not know it, but in many cases they are operating with a hidden agenda.

You have to remember that most people hate to be manipulated. Most people don’t like to be tricked.

Sadly, things go so well for you as far as social interactions go that you often become blind to your manipulative side. This can lead to all sorts of unfortunate situations.

Do yourself a favor and try to be clear as to what your agenda is, and be more transparent with people.

Water is the primary element of all Pisces people. Water is, of course, very emotional.

Interestingly enough, when people first meet you, they see somebody who is stable and who is reassuring.

However, if you were to practice a deeper level of self-introspection, you would realize that you are actually driven by emotions.

There are certain reactions that drive you forward and unfortunately, you are often embarrassed about them. This is why you would rather sweep them under the rug.

Well, you should stop doing that because the more you try to deny something, the more those hidden forces will undermine you.

Neptune is the ruling planet of people born on the 23rd of February.

Neptune is both distant and mysterious. There are certain parts of your personality that even you are unaware of.

It would be a good idea to be more in touch with these emotions. These are primarily emotions, because Neptune is a water planet. It is associated with emotions.

By being clear as to what truly animates you, you would become a more effective person not just in terms of how you deal with others, but based on how you view yourself.

Remember, your external world is only a reflection of your internal world.

My Top Tips for Those with a February 23rd Birthday

Avoid focusing too much on what other people think of you.

Also, avoid having a hidden agenda. Be clear as to what your needs are.

Since you are gifted with a tremendous ability to communicate clearly, people won’t take offense.

As long as you are fully transparent regarding what you want out of any situation, people are usually more than happy to give you what you’re looking for. This can lead to win-win situations.

The lucky color for those born on February 23 is represented by violet. Violet has historically been associated with royalty.

Believe it or not, you are a rock start. Why?

When you enter a room, people pay attention. You are able to grab people’s attention and keep it.

Best of all, you don’t do this in a ham-fisted or blatant way. You can be subtle if you want to.

People Born on 23rd February Must Always Remember This

If you were born on 23rd February, you might find that you go through all kinds of circumstances in life – quite unpredictably – in which there’s a constant cycle of feast or famine.

Worrying about money is almost certain to ensue, and that’s okay. It’s only human nature to worry about money if its presence in your life is such a difficult thing to predict.

Jobs can come and go, the one career path you pin your hopes on suddenly sees your dream company folding, and worse.

It can feel as though your money is spent as soon as you make it, but have heart, and remember one thing – cashflow.

That is to say,  if you break the words down, that cash is indeed a flow – money moves, and through moving, invites more of itself from unexpected places to fill the gaps.

Don’t get caught up in hoarding your cash beyond sensible savings, and likewise, don’t become a miser or fear that you’ll be a pauper all your days.

Things ebb and flow as they should, and even in the lives of richer people this is the case, albeit orders of magnitude bigger of sums going in and out.

See money in motion, rather than something to cling to, and watch your attitude of abundance blossom.

You might find this shocking if you’re born on February 23. After all, people have been telling you that you are probably the most stable person that they have ever met.

Well, that’s only true as far as surface appearances are concerned.

If you practice even the slightest bit of self-introspection and self-discovery, you would realize that there’s a lot going on beneath the surface.

Instead of being fearful or apologizing for this reality, you might want to dive in. You might want to embrace this side of your personality because believe it or not, this leads to greater victories in the future.