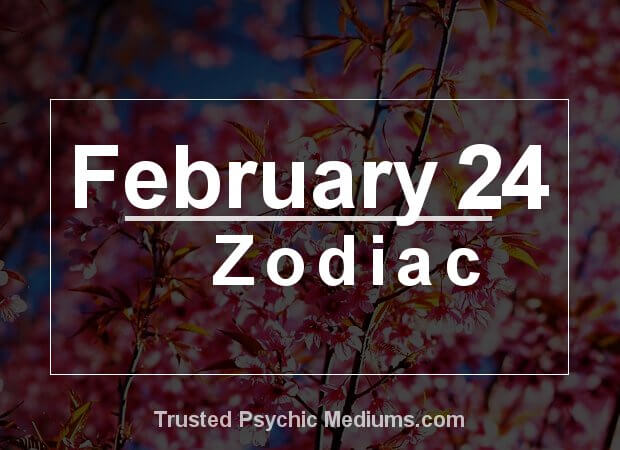 What is your Zodiac Sign if you were born on February 24?

If you are born on February 24th, your zodiac sign is Pisces.

You’re the type of person who looks at your emotions as your personal roadmap to the world. You interact with people and you navigate all sorts of social situations based on your emotions.

This gives you tremendous insight. In many cases, you have picked up enough along they way to become a very intuitive person.

It seems that you are able to connect with people on a fairly deep level.

As long as you pay attention to your personal maturity and other areas of your life, this aspect of your personality can pay off tremendously.

It can open many doors of opportunity in your career, your business, or your romantic relationships.

You’re very sensitive to other people, you’re a very thoughtful person, and you practice a lot of empathy.

The big danger, as you get older, is that you become more intolerant of other views as far as matters of the heart are concerned.

Since your thoughtfulness and compassion to others have paid off tremendously in the past, you are often tempted to believe that this is the only way forward.

This is very dangerous because if you want to truly know other people, you have to respect differences. You have to understand that people look at the world from different pairs of eyes.

We have different experiences. We have gone through different things that have changed us along the way.

The moment you are able to accept this and respect this fact is the moment you would become a greater lover in the fullest sense of the word.

Those with a birthday on February 24 are faced with a very stark choice: on the one hand, they can be great team members.

People would easily say that many people born on February 24 are excellent working mates. They have your back, they are dependable, they are trustworthy.

On the other hand, there’s a part of you that gets really impatient with people.

The reason for this is quite simple. You navigate the world based on emotions, and you often feel that people are not moving forward primarily because they haven’t gotten in touch with their emotions.

Your outbursts, as accusing and disruptive as they may be, are cathartic as far as you’re concerned.

You feel that if you get a sense of release, getting stuff off your chest, then people would not only understand but would greatly benefit from these.

Well, you will find out in the worst way possible that outbursts are probably not the best way to motivate people.

Unfortunately, there’s no way around this aspect of your personality except for maturity and hard experience.

The most outstanding characteristic of Pisces people born on February 24 is their generosity and general gentle nature.

Unless you are experiencing some sort of meltdown or you are ranting and raving because you’re trying to improve other people, you’re usually gentle.

A lot of people might even believe that you are a very mellow person. You tend to exude a sense of inner calm.

This is due to the fact that you try to appeal to other people’s emotions. You get where they’re coming from. You understand how they operate to some extent, and you project this outward.

While this works for the most part, it does have its limits as we will discuss below.

Positive Traits of the February 24 Zodiac

You really go out of your way to at least not appear judgmental.

In the beginning, you really are very embracing and welcoming of all people despite their differences.

However, this has a limit. You care so much for other people that at a certain point, you put your foot down. You see that they engage in certain patterns in their lives and many of these patterns are not exactly positive.

You try to call people out not because you’re trying to tell that you’re superior to them or you know better. Instead, you try to do this out of concern.

This doesn’t always go over the way you expect.

Negative Traits of the February 24 Zodiac

Natives of this zodiac sign tend to be overbearing on an emotional level. You also strike people as two-faced.

Now, this is quite a shock to many people born on February 24 because for the most part, they feel that they’re living life according to their highest ideals.

They feel that they practice a high level of integrity. What went wrong?

You have to remember that different people have different emotional values. Just because certain things are true for you and certain emotions are very valuable for you, this doesn’t necessarily mean that this applies across the board.

While there is such a thing as universal truths, the way you go about calling out people or trying to present them with unpleasant facts for their own good can come of as overbearing.

You’d be surprised as to how many people you tend to alienate because of this aspect of your personality.

Water is your paired element. Just like water, you can be quite unstable.

While for the most part you can be a very mellow and reassuring person, in certain circumstances you let your emotional nature get the better of you.

Neptune is the ruling planet of people born on the 24th of February.

Neptune, for the most part, is mellow, until you get on its bad side.

You don’t really go off on people because of malice. It’s not like you’re trying to harm them or hurt them in any way.

You come off as judgmental because you are trying to help people.

I know that sounds paradoxical, it sounds almost ironic, but that’s who you are.

If you read up on Neptune in Greek mythology, he goes off on extremes from time to time. The same applies to you.

My Top Tips for Those With a February 24th Birthday

Avoid trying to impose your values on others. Learn how to accept people fully.

You’d be surprised as to how much happier you would be if you were able to do this.

Lucky Color for the February 24 Zodiac

The lucky color for those born on February 24 is represented by turquoise.

This color looks great at first, but eventually you would notice that it can be quite challenging. The key here is to achieve some sort of balance.

This Is Why People Born on 24th February Are So Lucky

There’s a wonderful combination of Aquarius and Pisces star signs in someone who has a birthday on 24th February, and that makes these people lucky.

Why? It’s because they get to enjoy the benefits of two outlooks on life simultaneously.

Aquarius is a star sign who is rational, but also one who is capable of producing big ideas that almost seem before their time.

With this energy, someone who was born on 24th February can always seem to be at the right place at the right time, and make sense of anything new they encounter fast.

Meanwhile, the energy of Pisces as an influence is very dreamy and emotional, yet can be balanced out by that Aquarius intellect.

This is why the balance is so strong, and through this, people born on 24th February can be lucky in love more often than not too – something an Aquarius alone often struggles with.

Both signs are intensely intuitive to the extent of psychic power too, which means they’re able to go with the flow of life beautifully, enjoying all the good fortune that brings.

Final Thought for the February 24 Zodiac

Pisces people are generally great people. They truly care, they are compassionate.

Do yourself a favor and be more self-introspective. You’d realize that there are quite a number of areas for improvement.

If you are able to work on these, then you would be more successful in other areas of your life.