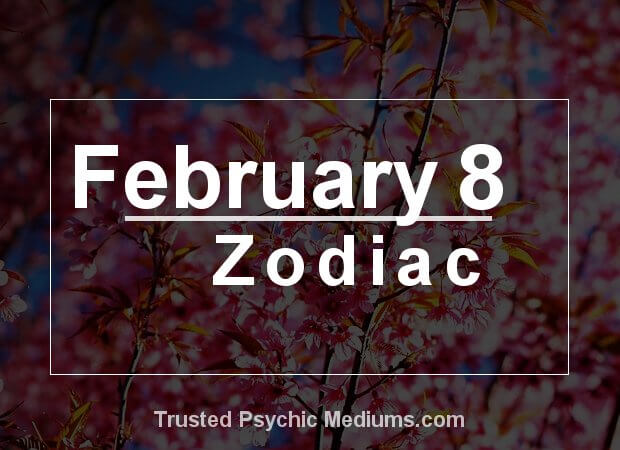 What is your Zodiac Sign if you were born on February 8?

If you are born on February 8th your Zodiac sign is Aquarius.

As an Aquarius person born on February 8th, you can be exceedingly idealistic.

In fact, you can be so driven by the latest and greatest ideas that you may find yourself contradicting yourself quite a bit. This comes with the territory.

It’s very hard for you to decide what to do because it seems that you only need to hear about a new idea for you to get so excited that you drop whatever you’re doing and pursue that idea.

Sure enough, once you put in the work to try to implement or create something solid based on the idea you’re pursuing, an even better idea comes along.

It’s not uncommon for Aquarius people born on the 8th of February to spend their lives chasing their tails, so to speak.

What this does mean is that they never get to achieve their fullest potential because they never run out of opportunities and distractions to pursue.

Regardless, they are charming, witty, artistic and have a lot going for them if they can only learn how to focus.

Not surprisingly, when it comes to members of the opposite gender, you have it down cold. It’s as if you were a born natural.

This cannot be said about most people.

You just seem to have a natural ability to pick out the right moments to make even better moments happen.

With that said, your big challenge is to overcome your cautious nature when it comes to intimate relationships.

When it comes to just hooking up, that’s not a problem, but when it comes to becoming a romantic partner and committing to somebody for the long haul, that’s where you get cold feet.

You can easily get detached and you often let your cautious side get the better of you.

Those with a birthday on the 8th of February tend to perform well in creative positions as well as humanitarian causes. You have a great way of organizing people around ideas and causes.

Unfortunately, there has to be another person to truly lead the organization.

While you make for a great background visionary or even a member of the planning team, when it comes to implementation and producing results, that’s somebody else’s job.

As much as you’d like to try, you’re just not up to the job because you get distracted easily.

It doesn’t come as a shock that people born on February 8 tend to rise up to a certain level and then remain stuck because they are unable to focus long enough to take their careers to a much higher level.

Aquarius people, in general, are visionaries, but people born on February 8 are especially idealistic.

Keep in mind that there are many different forms of idealism. The most relevant form of idealism that applies to February 8 people involves their passion and sense of urgency regarding some sort of hot idea.

They are able to do a lot of things to pursue an idea, but by the time they are ready to truly make a big leap, they lose heart.

Why? Another better idea comes along.

They also don’t hesitate to have fun during the process and this can slow down things a little bit.

They can also be quite unserious for long stretches of time.

Positive Traits of the February 8 Zodiac

People born on February 8 can give a pep talk.

They are a very creative people and it’s not hard for them to attract favorable attention.

Negative Traits of the February 8 Zodiac

People born on February 8 suffer from what I call “shiny object syndrome.”

They pursue a goal up until the point where the goal is ready to pay off big time. However, they never get around to unlocking the full potential of their hopes and dreams because they start developing other hopes and dreams.

As far as love is concerned, they are so magnetic and charming that they really don’t have to try very hard to attract members of the opposite gender. This ends up slowing down their emotional maturity as far as commitments are concerned.

The aspect of Air that is most manifested in your personality is the fast energy of air.

Air, unlike solids or liquids move very fast. In fact, it doesn’t take much energy to move air.

It is very light and it is very mobile.

The same applies to your tendency to come up with and be excited about ideas.

Your mind moves at a thousand miles per hour. Unfortunately, it’s very hard to focus at that rate.

You make matters harder on yourself when you get excited about a new idea that comes along.

It is no surprise that you really can’t get much of anything done as far as the big goals of your life are concerned.

Uranus is the main power source of Aquarius.

Uranus is distant and it’s filled with gas.

Its gaseous state is the most relevant to your personality because it’s constantly moving. It’s unsettled.

It may seem like it’s settling down, then something happens and everything is up in the air once again.

The same applies to you and your relationships as well as the ideas and goals you pursue.

If you only know how to channel Uranus’ stable side, you may be able to go further in life.

My Top Tips for Those with a February 8th Birthday

While you should give yourself some leeway for versatility and contingencies, there is a big difference between being deft and nimble and dropping everything.

Know that difference, otherwise you are not going to get very far.

The lucky color for people born under February 8 is represented by purple.

This color represents rarity, passion and a certain nobility.

You have all these things going for you and that’s why you don’t have much difficulty attracting people.

However, people will get tired of you if it’s obvious that you don’t really have a set plan that you can deliver on.

This is the Most Common Mistake 8th February Zodiac People Make

It’s safe to say that people born on 8th February are often blessed by lucky stars, or so it appears.

Luck seems to follow these people around, and they stroll almost casually from one cheerful set of events to the next.

Nonetheless, one thing that quickly becomes apparent to these people is that the game of love is one whose rules almost seem to change by the hour.

A common mistake made by these people, no matter how good their intentions, is that love can be a confusing thing indeed.

It’s horrible, because these people love deeply and with all of themselves, yet can’t help but seem to give themselves to the wrong people as part of that.

People who were born on 8th February often make the mistake of confusing a charming person with an honest one.

This isn’t their fault, and it’s rather those who are manipulative to begin with who are in the wrong – but by the time realisation has dawned on the poor Aquarius soul, it can be too late, with a lot of tangled up emotions besides.

Final Thought for the February 8 Zodiac

It is undeniable that Aquarius people born on the 8th of February are naturally charming.

You can talk people into a hypnotic stupor. That’s how gifted you are with people.

People are fascinated by your ideas.

Unfortunately, the world doesn’t turn on just ideas alone. You have to deliver.

So it’s imperative that you learn how to focus so you can become a more effective person overall.