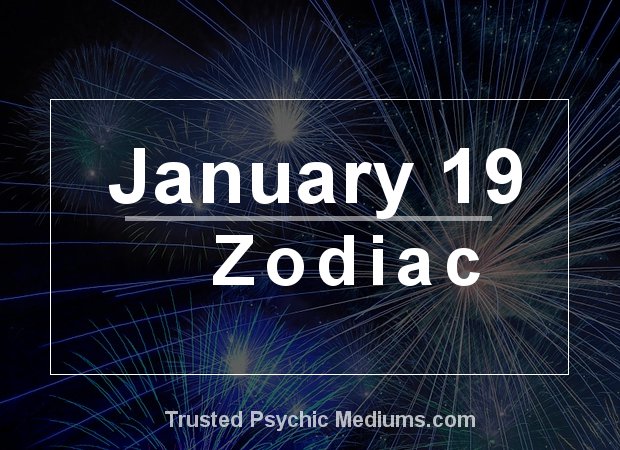 What is your Zodiac Sign if you were born on January 19?

If you are born on January 19, your Zodiac sign is Capricorn.

As a Capricorn born on January 19, you have traits of both classical Capricorn and Aquarius.

You are a cusp sign. This makes you a hybrid as far as your personality and outlook are concerned.

On the one hand, you can be a very dependable, reserved and conservative person. You tend to stick to tradition and how things are done.

You also tend to be quite a materialist in how you approach life in general.

On the other hand, you can have a flair for expressing things in idealistic or even emotional terms.

You are never content to focus on just what exists, you also focus on how things can be improved. This is in keeping with the Aquarius side to your personality.

Aquarius people are very idealistic. They look at not just what is, but what could be.

If you were to adopt a good hybrid strategy to the different currents flowing through your life, you can draw strength from both sides of your personality and can be quite an effective and successful person.

Lovers born on January 19 can be very loyal. The problem is, they are often very idealistic when they are young.

Now, this doesn’t mean you don’t get into relationships. What it means, however, is that it takes you a long time to truly give your heart to someone.

And if you do end up feeling betrayed, at the very least, it takes you a much longer time to commit to somebody else.

You often stick with very unrealistic expectations of your relationships and this can put a tremendous amount of stress and pressure for people who want to get close to you.

This applies to both lovers and friends.

People born on the 19th of January tend to be loved by their bosses and superiors. This is not an understatement.

Why? They tend to mix two very important traits in any kind of work situation: drive and the ability to think in abstract terms.

It doesn’t really matter what industry January 19 Capricorns find themselves in. They will excel.

Still, the best jobs for them are business, entrepreneurship and science. They are not only able to work with what is, but they have the power, drive and energy to explore what could be.

This is why, in scientific settings, they tend to become organic leaders. People naturally gravitate towards them because they lead by example.

For people born this day, the 19th of January, one word describes them: contrast.

While they are hard workers and can be very driven people, when you talk to Capricorns born on January 19, it’s very easy to falsely conclude that you’re not talking to a Capricorn.

They seem very eager to let their hair down.

They can be very unorthodox as far as engaging with people.

They seem very, very open-minded. It’s as if you are talking to somebody who is more like an Earth or Water sign.

But don’t let appearances fool you. Deep down, they are very driven, focused, and results-oriented.

Not surprisingly, they command a lot of natural loyalty. While they don’t often make a big deal of themselves coveting the top spot in any kind of career or social environment, they end up getting to the top, or getting close.

Positive Traits of the January 19 Zodiac

Even if they are assigned a very boring job, they find the fun in it. They find a way to get excited.

Not only that, they look for possibilities. This enables them to not only turn in work on time, but they make sure that they turn in the very best work.

They also tend to lead by example.

People can talk about all sorts of concepts until they’re blue in the face. January 19 Capricorns would rather spend that time doing something about it and providing a solid example to others.

Negative Traits of the January 19 Zodiac

For people born on the 19th of January, their normal, happy go lucky exterior can change overnight.

If they feel that they are somehow being insulted, as far as their deeply held values are concerned, they have often a scary ability to ward people off.

It’s bad enough that you stop listening to people, but you can take several extra steps like ignoring them completely and dismissing them. This can make you a very formidable opponent.

You also can be very stiff and reserved in certain contexts.

The worst part of you is when you become stubborn. Once you made up your mind about people or ideas, it’s going to be very difficult for you to change your position.

Earth is the primary element of all Capricorns.

For people born on January 19, Earth’s influence on you is your ability to concentrate. You’re able to focus on the work at hand and pursue it to its logical conclusion.

You also can be quite solid as far as quality standards are concerned. To some extent, you exhibit traits of a perfectionist due to your January 19 Earth orientation.

Saturn is the ruling planet of all Capricorns.

Saturn, on this day, focuses on boundaries and limitations. This manifests itself in your ability to practice a tremendous amount of self-discipline.

Even if there are many easier paths in front of you and all sorts of distractions, you are able to stick to what you need to do. You are able to look at the long game and proceed accordingly.

Not surprisingly, you tend to collect big rewards along the way.

My Top Tips for Those with a January 19th Birthday

For people born on this day, it’s a good idea to be a little bit more open-minded about people in general.

Don’t believe that just because somebody has conflicting values from yours that that person has absolutely nothing to contribute.

You’d be surprised as to how much you can learn and benefit from people who have conflicting values.

You might feel that they are just wasting their time, or worst, destroying their lives, but at the very least, you can walk away with a few cautionary tales from such situations.

Resist the temptation to dismiss people and write them off because you’re not benefitting when you do that. You will only end up restricting your learning opportunity.

Yellow is your lucky color.

Yellow, like the sun, radiates a lot of positivity and possibility. It’s only able to do this because it has a lot of power.

Your ability to focus give you a tremendous amount of power. Don’t let that power go to waste.

This Is The Most Common Mistake 19th January Zodiac People Make

While people born on 19th January tend to ave plenty of talent, especially when it comes to intellectual pursuits, there’s one consistent problem that these folks, born as Capricorns in astrology, tend to have.

Put simply, that’s that people born under the 19th January zodiac tend not to have much faith in people.

While there’s such a thing has healthy cynicism, it’s all too easy for these people to assume that everyone is a crook, a swindler or just out to get them in some way.

Because those born as a Capricorn tend to be somewhat self-motivated – only out of a desire for comfort and success rather than malice – they assume that everyone else is out for their own gain at the expense of the 19th January individual.

Yet if you slow down, open your heart and mind, and relax, you’ll find that people surrounding you have your interests at heart more often than not.

Altruism and kindness are very real, ought to be shared. Mistakenly thinking you are going to be swindled at every turn will only lead to isolation and paranoia.

Final Thought for the January 19 Zodiac

A Capricorn born on the 19th of January is prone to deep levels of insensitivity and bullheadedness. You can be quite stubborn.

Of course, you don’t perceive yourself as such. You try to look at and define yourself from the perspective of your Aquarius side.

You have an airy, approachable exterior, but deep down, you can be quite set in your ways as far as your attitude towards people and new ideas.

If you are able to confront these and make peace with it, you will be able to get along better with a wider range of people.

Most importantly, you would be able to pick up ideas that would enable you to take your life to a much higher level of success, happiness, and accomplishment.