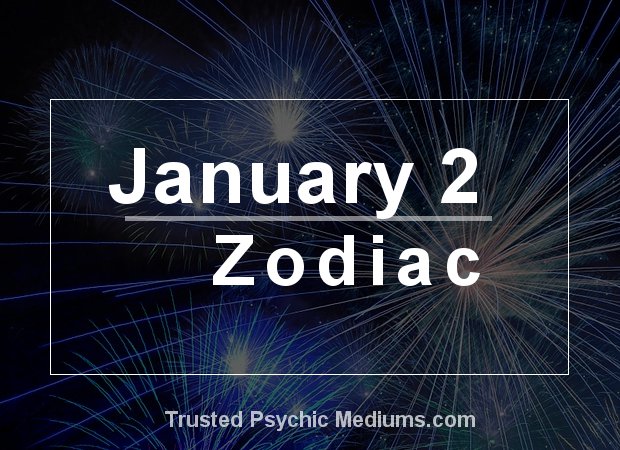 What is your Zodiac Sign if you were born on the 2nd of January?

If you were born on January 2nd, your zodiac sign is Capricorn.

As a Capricorn born on January 2nd, you tend to be very conservative. You are fearful of change and you’re not a very spontaneous person.

Now, this description might seem like you’re a stick in the mud, but in reality you could actually be quite a fun person.

You know that real freedom is not found outside of rules. There’s nothing attractive and sustainable about living life without rules.

Instead, you learn to derive your enjoyment and sense of purpose within fixed structures.

Not surprisingly, you do quite well in any kind of structured environment, whether it’s a corporation, a religious organization, or a tight-knit social organization.

Whatever the case may be, you can be quite a creative and spontaneous person in your own way.

Very liberal people who seem to have no limits tend to make you uncomfortable and uncertain. This doesn’t mean you can’t be friends with them, but you can only be friends up to a certain level.

You also tend to work hard.

However, you often find yourself not rising to the level you feel you deserve because of your reluctance to take calculated risks. You tend to focus more on what you stand to lose, instead of what you could possibly gain.

Lovers born on the 2nd of January are idealistic romantic partners.

Not surprisingly, you are very loyal and responsible partner but in many cases you tend to be loyal to the wrong people.

You have a lot of love and respect to give, but the problem is you tend to get saddled with people who take, take, and take, and never give anything back.

It doesn’t come as a shock that you get very jaded very easily. You tend to hang on to dysfunctional relationships far too longer than other signs of the horoscope.

Keep in mind that the perfect person doesn’t exist. Stop projecting your hopes and dreams, and focus more on recognizing people for who they really are.

People born on January 2nd are very hardworking. There is no doubt about that.

You tend to focus on what’s in front of you and pour all your energy and attention onto a task until it’s done.

This draws a lot of attention to you because you are the “go-to” person in any kind of team.

The problem is you tend to overdo things. You go over the edge in order to achieve a goal. You often end up failing to stop.

You have to remember that you don’t have to overdo things.

Still, due to the fact that you are able to give 100%, you are a natural born leader.

Keep in mind, however, that there are many definitions of leader. There is an organic leader, and then there is a titular leader.

You tend to be more of an organic leader. You may not have the pay grade and official title of CEO or Vice President, but make no mistake about it–you are the leader in the group.

This is due to the fact that you have high standards and you do not tolerate any deviations from that standard. Of course, this leads to you making many unnecessary enemies.

On the one hand, you are very sensible and take calculated risks.

On the other hand, you draw such tight lines regarding your comfort zones that you often ignore the fact that they turn into invisible prisons.

You have to remember that in many cases, we are bound by our expectations and assumptions. They shape our reality.

This is why it’s really important that we cherry-pick our reality based on the expectations we subscribe to.

Otherwise, life can become unnecessarily hard and the worst part of all this is that we chose this level of discomfort. If you’re feeling stuck or frustrated, it’s because you chose to feel stuck and frustrated.

There’s really nobody to blame. It’s not like somebody’s holding a gun to your head, forcing you to be miserable.

Do yourself a favor and not overthink things. Just allow yourself to have fun.

Positive Traits of the January 2 Zodiac:

People born on January 2 are very driven, disciplined, and methodical.

They only need to be told once and you can rest assured that the job will get done.

They are not robots. They can act like robots, however.

They can nail a task and continue going even though it’s already been taken care of.

You are able to handle even the most formidable tasks. Even an intimidating role is not a problem for you, because you know that where your focus goes, your energy and attention flows.

You cannot take no for an answer. Failure is never an option with you.

You always believe that you are in control of the amount of focus you have.

With that said, if things go south, you don’t hesitate to pin the blame on other people and situations.

Negative Traits of the January 2 Zodiac:

People born on the 2nd of January always need to keep in mind that we live in a world we cannot create.

In many cases, regardless of how much effort, focus, and attention you put into something, things just won’t work out.

Unfortunately, you can develop tunnel vision that you end up being stuck in jobs and relationships that have long gone past the point of diminishing returns.

Don’t do this to yourself. You are more valuable than that.

Earth is the governing element of Capricorn.

Earth people tend to be very conservative. They hate spontaneity and they like predictability.

Now with that said, January 2 Capricorns tend to work really hard and they tend to have high standards as far as their standard of living should be.

This is one of the challenges January 2 Capricorns grapple with.

Unfortunately, one vice many Capricorns born on the 2nd of January indulge in is to take shortcuts as far as status symbols go.

They know the value of hard work, and if they fall short, they’d rather buy a BMW or a Ferrari to at least gain the outward perception of the inner goal that is really their objective.

Saturn in the governing planet of Capricorn men and women.

Saturn symbolizes being grounded and stable. It also symbolizes oppression.

This is not a mistake. Keep in mind that while being stable and being well-grounded in reality are good things, if you take things to their logical extreme, it can be a form of addiction and mental oppression.

Do yourself a big favor and let your hair down once in a while. Understand that not everybody shares your values and you should be perfectly okay with that.

My top tips for those with a January 2 Birthday –

Understand that life is all about change.

While it’s okay to work hard and put everything that you’ve got into your goals, understand that ultimately, life is not under your control.

Allow it to flow and allow yourself to be more spontaneous once in a while. This enables you to truly live an abundant life.

Lucky Color for the January 2 Zodiac

White is the lucky color for the people born on the 2nd of January.

You have very impeccable standards. You can also be very optimistic regarding your abilities.

Understand that white is not the absence of color, but the presence of all color. Its purity lies in the fact that it is the combination of all colors.

Allow yourself to see the world in many different colors, instead of just black and white, and you would be better off for it.

Lucky Numbers for the January 2 Zodiac

And that mistake is rushing into love!

While people born on 2nd January are Capricorn folks through and through, together with all the level-headedness and responsibility that goes with it, these folks still can’t help but let their baser urges get the better of them.

Although they are often ashamed to admit it, even the keen intelligence of someone born within the 2nd January zodiac has difficulty telling the difference between love and lust – between a physical crush and a deeper, spiritual union.

This can prove frustrating, if not heartbreaking, yet it’s also an invitation for these people to also use their wonderful gifts for self-discipline and control for their advantage.

While swearing off love altogether and refusing to let any feelings in is, to say the least, too far in the opposite direction, people born on 2nd January can still avoid repeating the mistakes of the past by taking their time in romance, and keeping their wits about them for those ever threatening red flags.

Final Thought for the January 2 Zodiac –

Tradition is great and everything, but it has its limits. Never ever let tradition and established practice rob you of the joy and spontaneity of life.

Life is too big for that. While working hard to meet your goals is commendable, ultimately life is worth more than a big house, a nice car, and tons of money in the bank.

There is a place for everything, and the highest value you should have is self-fulfillment and transcendence.