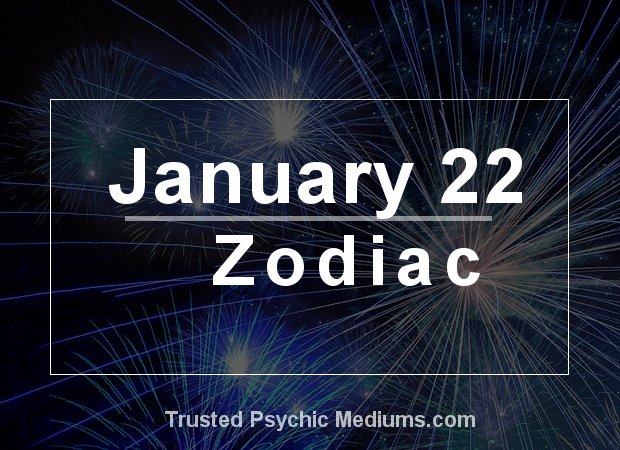 What is your Zodiac Sign if you were born on January 22?

If you are born on the 22nd of January, your Zodiac sign is Aquarius.

As an Aquarius born on this day, you are quite known to be a troublemaker. You didn’t intend to, it wasn’t your purpose to rub many people the wrong way, but this is your reputation.

You have a rebellious streak to you, and people can see it a mile away.

Now, keep in mind that this is not always a bad thing. In many cases, boats require a lot or rocking for boats to go forward.

In other words, every social group or every work team needs somebody who is able to look at the situation that everybody tends to agree on from a completely different perspective.

At the very least, you keep everybody honest.

In fact, if they pay attention to you, you might even be able to lead them to new directions that can take whatever enterprise you engage in to a whole new other level.

Don’t get me wrong. Your romantic relationships start up right with a lot of promise and a lot of heat.

What happens is that you require a tremendous amount of emotional intensity, and your partners, eventually, only reach a plateau.

Eventually, they would hit a wall as far as romantic energy is concerned.

Not surprisingly, you find that the relationship has cooled off and this gives an excuse in your mind to move on. You need to mature past this point if you want to deepen your relationships.

Unfortunately, a lot of people born on January 22nd who come to grips with this internal reality still hang on to their relationship.

While they can remain married or committed for a very, very long time, at some point, the have essentially written off their relationships.

Those with a birthday on the 22nd of January are a best fit for professions requiring discovery or iconoclast.

There is a very rebellious side to you that looks at the unconventional as a springboard to something deep, profound and limitless. Entertain this part of you as far as your career is concerned.

If you are in the world of academia, this is exactly the kind of intellectual power source that you need that would enable you to build a very prestigious and honorable academic career.

You’re the type of person who likes to rock the boat because that’s who you are.

However, after listening to you and hanging around with you, they realize that a lot of the things that you say actually make sense.

Eventually, people rally around you and can’t get enough of your interesting takes on situations that they often take for granted or assume a lot of things about.

Due to this aspect of your personality, people find you naturally attractive and intriguing.

Positive Traits of the January 22 Zodiac

Your internal rebellious nature is your ticket to social charm.

Without intending to, you say things that are witty and cutting. And I mean cutting in a very good way.

It’s very easy for most discussions to become awkward, routine and even obligatory, but you cut through all that by saying stuff that is off the wall.

While people might be shocked at first, they eventually start flocking to you because you are, it seems, the only person with a unique brain in the room.

Negative Traits of the January 22 Zodiac

You know that your unique or unusual takes on life are what draws attention. You need to resist the temptation of trying to be shocking for its own sake.

There is a fine line between rocking the boat, pushing the envelope and rattling the cages of people’s comfort zones, and flat out offensiveness.

You have to know where that line is drawn, otherwise, instead of being witty and charming, you come off as obnoxious and offensive.

Air is your paired element. The aspect of Air that governs your personality is its volatile nature.

The right kind of air, when under the right amount of pressure and heat, can be explosive.

Now, keep in mind that explosions are not necessarily bad. Explosions can lead to visions, new territories and new discoveries.

However, you are dealing with some volatile stuff. It requires a lot of maturity to make these explosions work for you instead of against you.

Uranus is your governing planet.

Uranus is a distant, seemingly mysterious planet. It seems that people can’t really fully know it, despite our best efforts and equipment.

With that said, there is something off with this planet. It defies conventionality.

In this light, Uranus speaks a lot to your personality.

While you can choose to act in a very conventional way and exert a lot of power that way, you choose not to because your real gift and your real blessing is your ability to take a different perspective.

My Top Tips for Those with a January 22nd Birthday

You should avoid apologizing for the fact that you’re different.

This is nothing to be embarrassed about. There should be no shame in that game.

Why? By bringing an abnormal point of view to otherwise boring, dry and all too predictable social situations, you might end up sparking a lot of creativity and even directing the overall flow of discussions as well as social attention.

Stop hiding your light. Your light reflects who you really are.

And, you may think it’s weird, but a lot of people find it not only attractive and appealing, but outright seductive.

The lucky color for those born in January 22 is represented by Tan.

Its rebellious or off-centered quality is actually what makes it so attractive.

Learn lessons from this color because it reflects a lot of what’s happening in your life and your personality.

People With the 22nd January Zodiac Always Make This Mistake

There’s a tendency in those born on 22nd January to be ever so trusting of people and to be extremely open about their plans and ideas.

This on its own is a great thing – we could all stand to be more open and forthright with each other, as long as our truths are delivered compassionately.

However, people born within the 22nd January zodiac are extremely likely to spill the beans to excess, so to say.

With that in mind, a common mistake made by people with this astrological chart is to express their deepest darkest secrets and vulnerabilities to the wrong kinds of people.

Of course, clamming up and doing nothing to speak to anyone about anything is a bad idea too, and too far in the opposite direction.

However, let your perceptiveness do some work for you here, and you’ll find that people’s actions soon show if they’re trustworthy or not.

Final Thought for the January 22 Zodiac

Instead of holding yourself back, contribute in an inoffensive yet distinct way.

The more honest you are with yourself, the happier you would be and the more successful you will become in all areas of your life.