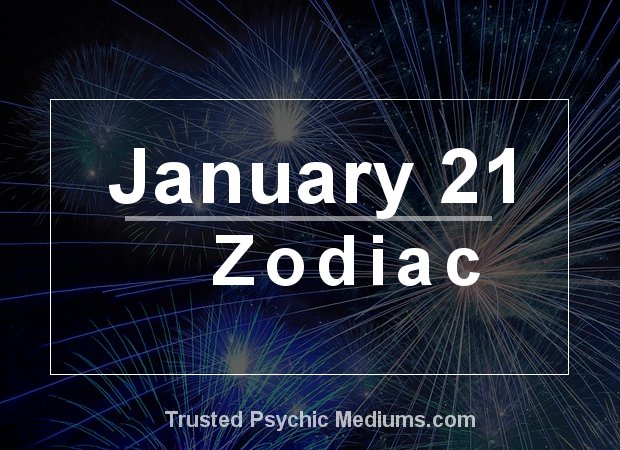 What is your Zodiac Sign if you were born on January 21?

If you are born on the 21st of January, your Zodiac sign is Aquarius.

As an Aquarius born on January 21st, you are known to be a softie. There is no other way to say it.

There is no shame in being called a softie because it means that you are a very humane and compassionate person.

You really find it easy to be selfless and to look beyond your self-interest and care for other people.

You are also a very modern person. You are easily one of the most open-minded people in most of the rooms you find yourself in.

Given your tendency to care for others and your open-mindedness, it’s not a surprise that you tend to be quite popular. After all, people tend to gravitate towards others who show that they care.

People can talk a big game, but you show and demonstrate to people that you actually care. You are able to step into their shoes and see the world the same way as they see it.

This makes you a very naturally charismatic person.

Lovers born on the 21st of January are very compassionate, very passionate, and quite selfless.

The reason why a lot of members of the opposite gender think you’re a great lover is not because you are equipped with the very best equipment.

It’s not because you are a stunner in the looks department.

Your secret is that you’re able to step into their world. You look at the relationship based on their perspective.

You are then able to give them what they’re looking for when they want it, and just how they need it. You are able to be intense, mysterious and enigmatic depending on the circumstances.

You are a physical and emotional chameleon, so to speak. In many cases, it seems that their pleasure is more important to you.

Not surprisingly, you never experience a shortage as far as lovers and friends go.

Those with a birthday on January 21 are best suited for jobs that require vision.

These jobs can include inventing, speculative investing, or any other line of work or business that requires some sort of discovery.

You don’t like to be trapped within the four walls of a typical office. You like to explore.

You like to deal with new ideas and people.

Not surprisingly, you tend to focus on jobs that involve a lot of travel.

Keep in mind that this travel does not necessarily involve geographic spaces. It can also involve ideological or intellectual spaces.

You’re the type of person who demands that the next day be different from the day before. Otherwise, you get really bored and you stop caring.

Generally, you are a very kind person.

If there is any one word that people would automatically equate with you, it would be humane. You know how to treat people.

Why? You are able to step into their shoes and figure out what they need and feel their pain.

You’re just a naturally kind person. Of course, this also has a negative aspect to it.

Positive Traits of the January 21 Zodiac

You don’t like restrictions. You don’t like being made to feel that you’re going to be stuck in one place for the rest of your life.

This means that you are a very creative, imaginative and resourceful person. Even if you are physically stuck in one place, you try to make it as entertaining for yourself and all others.

You love your freedom and this drives your creativity and imagination.

Negative Traits of the January 21 Zodiac

You are so kind and compassionate that, in many cases, you attract the wrong kind of people.

Do yourself a big favor and recognize who these people are in your life and get some distance from them.

This doesn’t necessarily mean that you have to cut them out of your life. You just need some distance from them.

Otherwise, they can get quite toxic indeed.

Air is the paired element for the Aquarius. And just like with any other Air sign, you tend to paint the world in terms of ideals.

The reason why you’re so kind and open-minded is that you believe that this is the ideal for the world.

Accordingly, just like air is all over the place, you believe that everybody shares these values. Unfortunately, they don’t.

Uranus is your governing planet, and Uranus can be quite unpredictable.

While on the surface it may seem mellow and even hospitable, it is also a gas giant and there are many dangers lurking underneath. This sense of mystery is what drives many people to you.

You are very kind at many different levels, but there’s a quite a bit of mystery to you that people find irresistible.

My Top Tips for Those with a January 21st Birthday

You should avoid your tendency to give in to your rebelliousness.

While it’s easy for you to develop cabin fever when it involves your career or certain relationships, do yourself a favor and learn to master those situations first before deciding to move on.

This would do you a lot of good because you shouldn’t live life full of half-finished projects.

Unfortunately, you are often so broad-minded that this is not only a danger that you face, but this actually can be an all too predictable future for you.

The lucky color for those born on January 21 is represented by the color Black.

Black is mysterious, just as mysterious as Aquarius people born on January 21 are.

While people can relate to black, and a lot of people like the color black, they can’t really fully know it.

The same applies to your personality.

You are very approachable and quite attractive indeed at some levels, but people can’t really fully know you. Maybe that is part of your appeal.

If Your Birthday Is 21st January, Never Do This

People born on January 21st toe the line between Capricorn and Aquarius, and because of this, they can often hold themselves to impossibly high standards.

A common mistake made by people who have this birthday is to beat themselves up over mistakes and embarrassing situations.

It’s so easy to spiral off into what can border on self-loathing if you aren’t careful with this energy and its influences.

There’s no need to be so hard on yourself, dear 21st January soul – to err is human, and to forgive is divine.

As such, you’re wise to get in the habit of forgiving yourself – never fall into the trap of punishing yourself, denying yourself things or berating yourself for simple mistakes.

There are always paths back into the light and of making amends.

Very few errors in life are beyond repair, however drastic and humiliating they might seem in the immediate term.

Take deep breaths, gather your thoughts and work out a game plan to repair the damage when things go wrong in life, and you’ll find your energies of lament and sorrow are put to fine use as fuel for progress.

Final Thought for the January 21 Zodiac

It’s okay to indulge your rebellious side. All Aquarius people have this in common.

Do yourself a favor and focus on mastering the things that you get into. Once you’ve mastered them, then it’s okay to indulge your rebellious side and give in to cabin fever and move on.

Other than that, you are risking leaving behind a lifetime full of unfinished projects, half-baked ideas and broken promises.