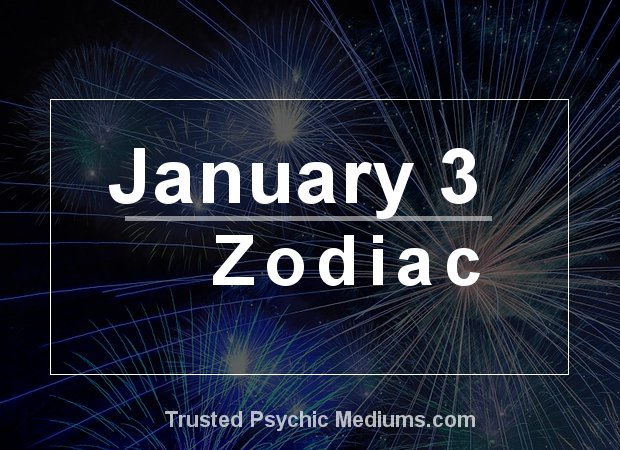 What is your Zodiac Sign if you were born on January 3?

If you were born on the 3rd of January, your zodiac sign is Capricorn.

As a Capricorn born on the 3rd of January, you are responsible, ambitious, and you often believe that life is one big project.

Just like with any project, you look at timelines, you look at available resources, and you look at implementation models. In other words, you are like this great architect of your life.

It seems like you have planned for everything, whether it’s romance, career, business opportunities, relationships, what have you. It’s all about planning to you.

The problem is life is what happens when you’re making other plans.

As much as we’d like to put everything that happens in our lives in neat little boxes, in most cases life throws a monkey wrench in our plans.

While this can be very frustrating and often leads to heartbreak, it also is what makes life fun.

You have to remember that it is what goes wrong that creates great leaders. If management is all about just adding ingredients to a built in system or some sort of magical machine, then most of us would be outrageously successful.

Unfortunately, that’s not the case. Reality is all about dealing with chaos.

The big challenge of people born on January 3 is to move past the safe comforting lines of plans and grand objectives, and stare life with all its complexity and often ugliness right in the eye.

If they are able to do that, they would be able to achieve more in their lives.

Simply retreating to the safety and convenience of traditional family, traditional identities, and traditional organizations and religion can provide a tremendous amount of effort, but ultimately they fall short. You have to deal with life on its own terms.

Lovers born on January 3 are loyal and dedicated partners.

In fact, they’re not afraid of commitments. Their problem is the opposite. They tend to commit too early.

They do this because they gain a tremendous amount of comfort and security in traditional partnerships or commitments.

They are often criticized for being boring love partners. When they believe that their partner is attracted to somebody else, they can feel quite threatened and jealous.

They also like to do things very slowly when it comes to their relationships.

The great thing about January 3 Capricorns is they tend to express their love through actions. This is welcomed by a lot of people because words can only do so much.

This doesn’t mean that words have no place. But, actions often reveal what’s in the heart. Words, after all, are the preferred tools of liars.

In any kind of work setting, people born on January 3 are often viewed as intelligent, self-assured, and not easily defeated by failures.

If you add all these traits up, it’s not surprising to find out that Capricorns born on January 3 tend to be successful.

You have to understand that life is all about failure. It’s easy to get excited about the end products of success–the big house, the luxury cars, the tons of money in the bank–but paying for all of that success is a series of failures.

Everybody has to go through that. Even the richest people on the planet have faced initial obstacles.

These obstacles taught them very important lessons that actually paved the way for peak performance and great success later on.

January 3 zodiac people understand this. They know that the price to pay for great success is often debilitating and soul-crushing failure.

They welcome this with a tremendous amount of energy. Not surprisingly, their ambition is so boundless that they are often criticized for being ruthless and reckless.

As far as career choices go, January 3 zodiac people tend to do well in investment banking, litigation areas of law practice, as well as pioneering medicine.

Once you commit, you can be counted to dedicate 100%  of your focus and attention.

On top of all this, you project a calm, cool confidence that enables you to perform at peak levels.

The downside to this is that people working around you can perceive you as the detached and cold.

You can often make usually gut-wrenching and emotional decisions fairly quickly because you focus on principles and objective facts, instead of emotions.

Again, this is a double-edged sword.

A little bit of sensitivity can go a long way, especially is you’re dealing with a lot of people.

Regardless, your decisions are often grounded in maturity and common sense. Emotions don’t sway you all that much.

Driving you on is a relentless pursuit of your dreams.

You know that you are capable of becoming so much more. You have the drive, ambition, and energy to make that happen.

To top all of this off, you’re not a very impulsive person. You can “wait and see” gain quite well.

Positive Traits of the January 3 Zodiac

You’re a very hard worker and you are very focused. You are also very prudent and formal in your dealings.

You’re not a very spontaneous person. You like everything done according to schedule and according to accepted protocol.

Not surprisingly, a lot of people would view you as a pillar of confidence in any kind of social setting.

While other signs of the horoscope may tell great jokes and may be a lot of fun, when it comes to serious stuff, people flock to you almost by instinct.

They can see that you project a tremendous amount of calm and confidence when you make a decision.

You also follow through. Your word is your bond and people can take your promises to the bank.

Negative Traits of the January 3 Zodiac

This goes with the territory because you are so focused and dominant as far as your energy goes, that people can easily misunderstand you.

On the one hand, people can view you as domineering and selfish.

On the other, they think that you are dictatorial or you only care about yourself.

What they don’t understand is that the more focus you put on a group goal, the more they would benefit.

Unfortunately, most people navigate the world through feelings. You, on the other hand, focus on results.

As you can probably already tell, this can lead to a few collisions here and there.

Earth is the governing element of January 3 Capricorns.

Earth symbolizes grounding, stability, and a sense of purpose.

You believe in doing everything based on a grand objective that serves not just your interest, but everybody else around you.

Unfortunately, a lot of people do not see this. All they can see is somebody who is dedicated in achieving what would seem, at least on the surface, very selfish goals.

Saturn is the governing planet of all Capricorns. It is represented by rules.

Saturn is the ruler of the Titans who were the gods before Jupiter and the other gods.

Rulership is very important to you. Protocol and proper hierarchy mean a lot to you, and you base your decision on them.

With that said, the intensity of focus and grounding of Saturn serves you quite well.

You’re not the type of person to start a project and lose interest in the middle. Whenever you commit so something regardless of how small, you dedicate enough energy and focus to make sure that it’s not just done, but done well.

My top tips for those with a January 3 Birthday

Forget the haters. That is my top tip for you.

Unfortunately, a lot of people will tell you that your goals are impossible.

There’s an old saying: People who say “can’t be done” shouldn’t interrupt people doing it. The more they bark, the more they poke fun at you, the more excited you should be in doing an amazing job.

The truth is the world needs more people like you, regardless of what haters feel.

You focus more on your dreams, hopes, and visions for a better future instead of your feelings.

Not surprisingly, you are able to put in the work despite the fact that other people have given up.

Lucky Color for the January 3 Zodiac

Brown is your lucky color.

Brown, of course, represents the earth, its power, its grounded nature, and its stability.

Earth, when watered, can also produce a tremendous amount of life.

Stay focused and you would ultimately produce a lot of growth in the future.

People know you enough and can peel back the initial layer of seriousness. People can see that you are actually quite an awesome person to hang out with.

Those born on 3rd January often have an exceptional head for numbers, even among other fellow Capricorn people born in January.

Naturally, at an individual level, some people take to mathematics and the like more easily than others, and that means that some people of the 3rd January zodiac will be pretty reluctant to look into the recommended career choice – accountancy.

Not only that, but accounting is often seen as a bit of a dour or drab profession, but it’s one that has that all important practical edge that people born as a Capricorn, such as someone born on 3rd January, so adore.

Being responsible for others’ finances is a big responsibility, but one that 3rd January zodiac people wear exceptionally well.

What’s more, the rise of self-employment across the world means that entrepreneurship is driving demand for competent and meticulous accountants to help the less financially savvy business folks out there from bungling their money.

This is something at which the 3rd January zodiac shows amazing aptitude – and they can expect to be handsomely rewarded for their efforts, leading to quite the comfortable lifestyle of their own.

Final Thought for the January 3 Zodiac

Focus on your sense of responsibility and this would bring blessings to all other areas of your life.

Whether we’re talking about your family, your friendships, or your career and business, your focus on responsibility not only helps you achieve your goals, but benefits everyone around you.

Of course, you shouldn’t take things to extremes.

Don’t be too suspicious. Don’t be so rigid that you end up being cruel to other people.

Be more open to other people’s feedback, but ultimately stick to your principles while benefiting from others’ feedback.