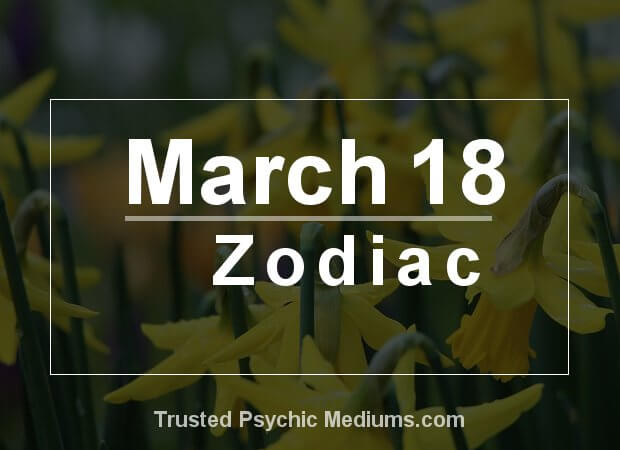 What is your Zodiac Sign if you were born on March 18?

If you are  born on the 18th of March, your zodiac sign is Pisces. As a Pisces person born on this day, you are quite known for your accepting, nurturing, and emotional nature.

In fact, it is this your emotional nature and your ability to feel things deeply that make you more compassionate, accepting, nurturing, loving.

It’s very easy to find people who just take, take, and take. In other words, all their friendships are transactional in nature. I’ll scratch your back, if you’ll scratch mine.

Put simply, these people are only friends because they get something of value from you and they define their friendship’s value to you as the value of what you can get from them.

It’s all about transactional exchanges.

Now, don’t get me wrong. In many cases, there’s nothing wrong with that kind of friendship.

However, it would be nice to have a friend that just wants to be friends with you not because you could do something for him or her. You are that kind of friend.

Lovers born on March 18th are one of the most romantically idealistic signs of the horoscope.

While there are no shortage of members of the Aquarius family that impose a lot of seemingly impossible demands on their romantic partners, while failing to live up to those ideals, you deliver something different.

You actually walk your talk. Put simply, if you demand love, loyalty, kindness, compassion from others, you are sure to do the same.

What makes you different is that you don’t stop at giving them what they give you.

You don’t view yourself as some sort of emotional mirror. Instead, you operate on a twenty to one basis.

What this means is if somebody is kind to you slightly, you are twenty times kinder to them. They can’t help but be more loyal to you.

When it comes to romantic partners, they can’t help but love you more deeply. You just have that way with people.

You tend to transform them and help them live up to their fullest potential, as far as their emotions are concerned.

Those with a birthday on March 18 would do best in jobs that involve nurturing, care, and patients. Jobs like, nursing, and certain types of medical services would fit you like a glove.

You might also want to try to become some sort of habitual action councilor. You have a way of getting past people’s defenses and suspicions and helping them.

You know how to step into other people’s shoes and see the world from their perspective. You have a tremendous talent.

Unfortunately, many people born on March 18, tend to lack focus. They’re so caught up in other people’s drama, that they fail to take care of their own business.

It’s not a surprise that  a lot of  March 18 people tend to coast through life. They don’t really put in that much effort and they tend to have mediocre careers that remain somewhat stuck at the bottom.

Most of them don’t earn what they deserve to earn. Unfortunately, there is nobody else to blame but themselves. A little bit of focus and drive goes a long way.

If you are born on March 18, you have an inborn sense of idealism regarding matters of emotion. You really hold yourself to a high ideal and this is reflected in how you treat people.

You treat people with the utmost respect. You make them feel good. It is no surprise that a lot of them reciprocate this.

In fact, you tend to develop a very loyal following, because you make people feel good, not just about themselves, but the world they live in.

Positive Traits of the March 18 Zodiac

People born on March 18 have a natural talent for bringing out the best in people. Let’s face it, the world can be an unfriendly place.

The world can be downright hostile. That’s just the kind of world we live in.

It’s not uncommon for people to feel that they are just alone in this world and there is nobody they can depend on except themselves.

When you come along, you open their eyes to another possibility that there are great people out there.

There are people who are willing to help without expecting anything in return. To say that you are rare, would be an understatement indeed.

Still, if there is only one of you for every one thousand people, this world would be a much better place.

Negative Traits of the March 18 Zodiac

In terms of negative traits, Pisces people born on March 18 are really aren’t that negative to other people.

In fact, for the most part, you are the best thing that happened to your friends and romantic partners.

Your negative traits involve you. You have so much time and attention for other people that you don’t give yourself enough emotional investment.

Not surprisingly, your focus is quite low and you really don’t achieve much of anything.

Do yourself a favor, and take care of basic things first. Hold yourself accountable and you’d be surprised as to how high you will rise and how far you will go.

Water is the paired element of all Pisces people. The particular aspect of water that is most relevant to people born on March 18 is it’s nurturing nature. Let’s face it, without water, we’d all be dead.

You have a way of nurturing people with emotional water. You give them a drive. You are able to excite them when they are feeling down and depressed.

Neptune is the planetary ruler of March 18 people.

As a Pisces born on March 18, Neptune is your ruler and this is incredible good news and incredibly bad news. First, the good news.

Neptune is very emotional and this shows in your ability to bring out the best in others.

You are able to project a nurturing and cultivating aura that makes people feel hopeful and optimistic about themselves and the world.

The bad thing about Neptune is that it’s also very dictatorial, authoritative and harsh. You are your own worst critique.

You often hold yourself back and in many cases, you operated out of fear in terms of your personal ambition.

If you are only able to overthrow this aspect of your Neptune personality, you will go far in life.

My Top Tips for Those with a March 18th Birthday

You should avoid caring so much about other people that you put yourself last.

The lucky color for those born under the March 18 is represented by Light Coral.

Light coral is a tremendously beautiful color and it is very optimistic. You can’t help but feel hopeful staring at this color.

This Gemstone is Perfect for Those Born on March 18th

Pisces people have a number of gemstones that are attributed to their star sign, but those born on 18th March especially often find themselves drawn to aquamarine.

The colour and texture of this stone is instantly soothing to such people.

This is true of anyone born on this date, no matter which generation they might fall into – and likewise, irrespective of whether or not they have any faith in the power of crystal healing.

Even the aesthetics of aquamarine are calming and nourishing to the soul of someone born on 18th March.

However, the qualities of aquamarine make it very apparent as to why it’s such a wonderful stone for Pisces people.

The water connotations alone make it a perfect fit, but it’s also a stone that’s used to add clarity to meditation visions or other psychic insights.

If you’re someone born on 18th March who often finds it hard to articulate your complex emotions, spending time with this stone may well help.

Final Thought for the March 18 Zodiac

You have a lot to offer the world. I think you already know this.

However, you should not sell yourself short.

Take care of your own emotional needs first. Make sure you are well-positioned in terms of your material needs and then take care of others. Priorities matter a lot.