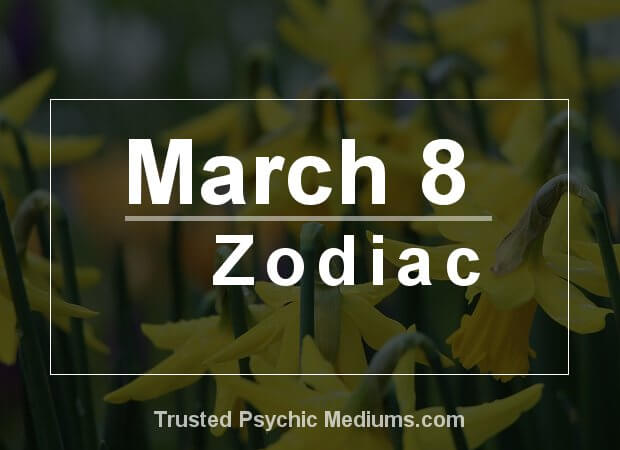 What is your Zodiac Sign if you were born on March 8?

If you are born on the 8th of March, your zodiac sign is Pisces.

As a Pisces born on this day, you are quite known to be a compassionate, caring, spiritual, and intuitive person.

You have a very flexible air to you that you can adapt to the personality of whoever finds himself or herself in front of you.

You are deeply curious about what’s going on in people’s lives, as well as how they look at the world.

You tend to look at the world in a fairly emotional way, and this gives you a tremendous ability to be sympathetic to others.

Your feelings tend to run deep and you often let your feelings get the better of you. To say that people think you’re sensitive is to put it mildly indeed.

In fact, you can be so sensitive that you find yourself in paralyzing emotional situations.

While in career situations you can make a break and stand your ground, the same cannot be said as far as matters of the heart go.

Lovers born on the 8th of March are considered to be some of the most idealistic romantic partners of the horoscope. In fact, you let your ideals of what love is supposed to be get the better of you.

Unfortunately, the way you define love as far as your ideals go have turned it into a prison.

Stop telling yourself these lies and you would start getting the love that you deserve.

It’s never a situation where for one side to win, the other side has to give, give, give, and give. In other words, you don’t have to lose.

I know this is going to be tough because you tend to have such a warped ideal of what undying and romantic love should be.

By taking a step back and focusing on what’s best for you, you’d be surprised as to what the real definition of love should be.

Those with a birthday on the 8th of March are best suited for jobs that require patience.

There are many things in life that produce instant results. It’s as if you show up one day, put in effort, and then all of a sudden all these rewards show up.

And when they do, they often aren’t as intense or as sharply defined as you imagined them to be.

If you’re able to wrap your mind around this, you would be able to put in the work for however long it takes to achieve great success.

This is why people born on March 8 are best suited for jobs that involve stamina. These are jobs that may seem worthless at first, but they build up in intensity as far as rewards go, given enough time.

I am, of course, talking primarily about the fields of business and teaching.

If you are able to cultivate your patience, you would go quite far, as far as your career and business prospects are concerned.

You are a very idealistic person, as far as your emotional state goes. You often expect a lot out of your romantic life.

And in many cases, you allow yourself to suffer because you have such overblown expectations. You stay for too long in relationships that really don’t help you all that much.

It’s a good idea for you to let go of unproductive ideals regarding love so you can have healthier relationships.

Positive Traits of the March 8 Zodiac

They really believe in love. They don’t hesitate to show love.

With that said, they are often the victims of their romantic ideals. They often stick much longer than necessary in unhealthy relationships.

Do yourself a big favor and make sure that your relationships benefit you.

This may be uncomfortable at first, this may even feel like you are stabbing your romantic partner in the back. But the sooner you do this, the better off you will be.

Negative Traits of the March 8 Zodiac

I’ve already mentioned a lot of the negative traits of the March 8 Pisces in the section regarding love and other sections above.

You have a problem. You have misplaced loyalties. You tend to be loyal to people who don’t treat you right. You’re not very loyal to people that could do wonders by you.

Do yourself a favor and be more realistic regarding your alliances. Before you give your trust to somebody, make sure that that person truly deserves you.

If you base your emotional investments on facts, you would go much farther.

Water is the paired element of March 8 Pisces people.

Accordingly, they are romantically idealistic, accepting, creative, nurturing, and caring.

With that said, don’t let your emotions get the better of you.

Do yourself a favor and base your emotions on reality. Insist on a win-win situation.

Remember, people will only respect you if you first respect yourself.

Neptune is the ruler of March 8 Pisces people.

Accordingly, you are romantically idealistic. You are also emotionally inflexible. The moment you get some sort of idea in your head, it’s going to be very hard for you to let go.

If you’re able to get past this aspect of your personality, you would go quite far in all areas of your life.

My Top Tips for Those with a March 8 Birthday

You should learn how to let go, seriously. There are many situations in your life where the best answer is to cut it off or break it off.

I know this mind sound crazy. After all, you’re the type of person who feels that once you have put in the time, effort, and energy in any kind of situation, it would be a loss to let go.

You need to fight against this aspect of your personality. You need to resist this type of thinking.

Lucky Color for the March 8 Zodiac

The lucky color for people born on the 8th of March is light yellow.

Light yellow involves a lot of potential. It is also very soothing and can be a healing color.

With that said, this can only remain a potential if you fail to act on it.

Unfortunately, given your tendency to remain stuck in problematic relationships, a lot of your positive sides remain exactly that: potential.

Lucky Numbers for the March 8 Zodiac

There’s a strong sense of creativity in even the most calculating and rational of Pisces people, and that’s just as true of the Pisces who was born on 8th March.

You’re someone who can tap into an unlimited level of creativity both for recreation as much as solving life’s problems, and it’s a wonderful gift.

Getting closer to that gift still is possible when you embrace the knowledge that it is the angel Sandalphon, the musical angel, who is most aligned with your own spiritual energy.

Having Sandalphon as your Guardian Angel means that you have likely loved music of all kinds from a young age.

More likely than not, you’re a performer of some kind too, and feel deep spiritual peace or excitement, depending on the venue, whenever you sing or play an instrument.

however, Sandalphon is also seen as a brotherly angel, and his energy helps you connect with the important males in your life, even if you aren’t brothers by family relation.

As someone born on 8th March, you have a gift for turning sibling rivalries into energy to fuel mutual progress.

And if you can do so to an awesome soundtrack, even better!

Final Thought for the March 8 Zodiac

If you are serious about moving ahead with your life, you need to seriously challenge all the relationships that you have.