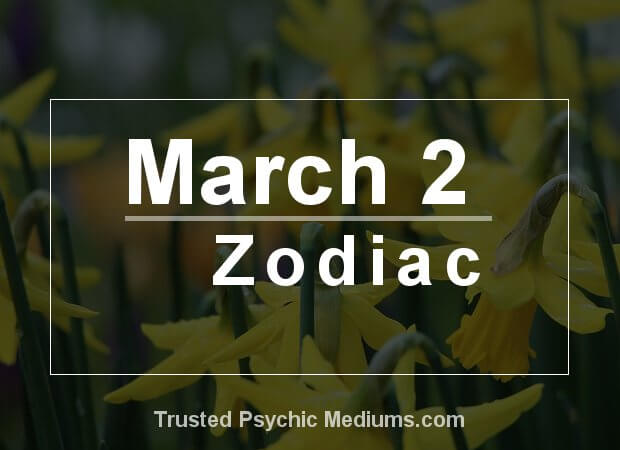 What is your Zodiac Sign if you were born on March 2?

If you were born on March 2nd, your zodiac sign is Pisces.

As a Pisces born on the 2nd of March, you are greatly appreciated for your idealistic, imaginative, and creative nature.

It seems like regardless of what difficulties surround you, you never lose hope. You understand that there’s always a way to get through things.

You get through things directly, or you will find an indirect way to get to some sort of side entrance. If you find yourself blocked from taking the side entrance, you are going to try to duck, tunnel underneath, or try to fly over.

To say that you never give up, at least when it comes to possibilities, would be an understatement indeed.

This, of course, makes you quite a popular person because most people are easily discouraged. Most people easily lose hope.

While you do have these same traits, you are a great cheerleader. As long as somebody else is doing the actual work, you will find it in you to remain hopeful.

Lovers born on March 2nd are considered to be quite idealistic in their love life.

You have to remember that at the very least, you have to hold yourself up to whatever standard you expect from other people. To do otherwise would be simply hypocritical.

In fact, if you insist on it, it’s too easy for them to brand you as cruel.

Sadly, a lot of Pisces people born on March 2nd don’t know the line. They get up making all sorts of demands on their romantic partners that they end up forcing the other partner out.

It doesn’t have to be this way. By loosening up your standards, you can actually be a lot happier.

It doesn’t mean that just because you compromise your standard, you no longer have standards. Ideals are exactly that. They don’t exist.

So do yourself a favor and put a little bit more realism into your romantic relationships. You would be a much happier and better-balanced person.

Those with a birthday on March 2 are best suited for jobs that require idealism, creativity, and imagination.

Anything to do with architecture, the arts, or film-making fits you like a glove. You could also try your hand at philosophy or some kind of theoretical academic discipline.

Now, with that said, it’s one thing to come up with ideas, it’s another to communicate them. You also have to work on your communication skills. Otherwise, it’s too easy for you to simply marginalize yourself.

Nobody’s holding you down from a great career, nobody’s trying to prevent you from achieving great rewards with your job.

By learning how to let go from time to time, your career can actually take off.

You feel that people should behave a certain way. You have all sorts of expectations regarding people.

And when they fail to meet these expectations, you get depressed. You get discouraged, and you feel let down. A lot of this is really all happening in your head.

You have to remember that reality spins on its own axis. Reality has its own rules and its own agenda. The sooner you wake up to this, the happier you would be.

Positive Traits of the March 2 Zodiac

March 2 people are very attractive to almost everybody because of their boundless idealism.

There’s something attractive about somebody who tells you that things can be done. We’re not just talking about things that are obviously possible, not just simply going through the motions of putting together things that are already highly likely to happen.

We’re talking about something that requires imagination and creativity.

When March 2 Pisces rallies people based on something that they believe can be done, people sit up and pay attention. People can’t help but be motivated by such idealism, creativity, and passion.

Now, keep in mind that this can only go so far. If March 2 zodiac Pisces people are asked to do the heavy lifting or to do the dirty planning, to essentially roll up their sleeves and do some actual work, that’s where they balk and fall back.

You have to know your limits if you are a Pisces born on this day. Otherwise, your positive traits can actually hold you back.

Negative Traits of the March 2 Zodiac

March 2 zodiac people are quite creative and imaginative.

It’s easy for them to get excited about possibilities. But the problem is when they are faced with all the dirty realities involved in turning an idea into something that you can actually detect with your five senses, they start to pull back. They start doubting themselves.

They start believing that however impressive their hopes and dreams may be, it might just take too much work and might take too long to materialize. Not surprisingly, they become depressed.

A lot of this really boils down to a deep, profound lack of self-confidence. They feel that they don’t have what it takes to roll up their sleeves and put in the hard, physical, and concrete work to turn their ideas into reality.

Of course, this is all in their head because they do have that capacity as long as they believe it. If you’re a March 2 Pisces, work on this part of yourself. Try not to take things to emotionally and you will be more successful.

Water is the main element of all Pisces people.

The particular part of water that is most relevant to March 2 Pisces is water’s connection with imagination and creativity.

This can be quite exhilarating, but it can also be quite unnerving and scary. Remember, creativity and imagination means going off to uncharted waters and imagining things that don’t exist.

Neptune can be nurturing and accepting. Neptune can also involve emotions that are very deep and all-encompassing.

With that said, there are certain unreachable, unknowable parts of Neptune that can lead to depression, emotional and even mental instability.

My top tips for those with a March 2nd Birthday

You should avoid being easily depressed.

Always understand that the big victories of life don’t just fall into your lap. They require work. They require effort, sacrifice, and in many cases, pain.

The more pain and sacrifices required, the greater the reward. That’s usually how it works.

The lucky color for those born under the 2nd of March is represented by the color for tomato.

Tomato has a deep yet bright red that leads to passion. There’s also a lot of creativity involved in getting this color. This says a lot about your personality.

People with the 2nd March Zodiac Always Make This Mistake

Being born within the 2nd March zodiac configuration means you are a Pisces. This is a star sign of dreams and untouched realities, so no matter how grounded and rational you are in life, there’s always some part of your head in the clouds.

This means that distinguishing between what you’re thinking and feeling between what’s actually happening can be a bit of a thorn in your side across life. This is especially painful when it comes to circumstances beyond your control.

For instance, you might come out of a job interview convinced you have the role, only to be later disappointed – even if you were so certain you were planning your life around this breakthrough.

Similarly, you can find yourself seeing signs of flirting in others that just don’t exist.

This can lead to painful unrequited love that can prove humiliating to get to the bottom of.

Take time with your thoughts and feelings if you were born on 2nd March – write them out, read them back the next day with a clear head, and see what truth awaits you.

Final Thought for the March 2 Zodiac

You can be your own worst critic. Give yourself a break.

By learning to let go of your fears and pushing yourself to work harder at your goals, you might make a lot more of your ideas turn into reality. That’s the whole point of life, right?