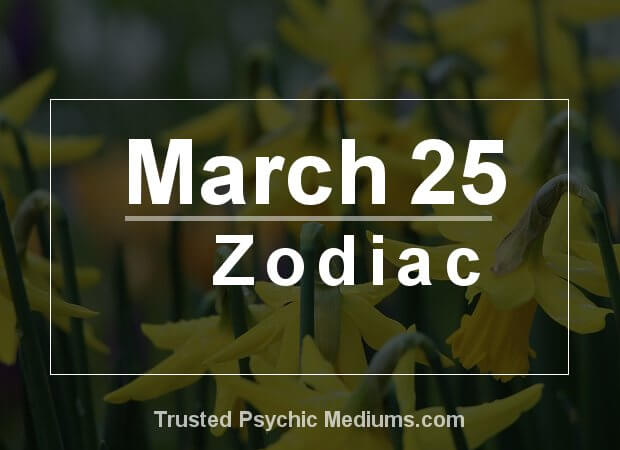 What is your Zodiac Sign if you were born on March 25?

If you are born on March 25th, your Zodiac sign is Aries.

As a person born on this day, you are a very direct, ambitious, spontaneous, independent and courageous person.

It would seem that, at least as far as surface appearances go, you have all the values needed for great success in your life. Still, you often find yourself struggling.

In fact, you often wake up in the morning saying to yourself, “What am I doing with my life? Why am I going around in circles?”

Despite all that you bring to the table, it seems that certain things are missing.

In other words, IQ and effort are not enough. You also have to have emotional intelligence.

This is where you’re sorely lacking.

Unfortunately, you are unable to make much progress despite whatever realizations you encounter because of your pride.

This is the biggest project of your life.

In terms of your intimate friendships and closest relationships, you have a lot to offer.

You’re a very positive person. While people may seem pessimistic and depressed, you always give them a reason to be optimistic.

You often turn their mood around, and it’s no surprise that you tend to develop strong followers.

People are very loyal to you because you make them feel good about themselves. You make them see that the glass is not half empty.

Unfortunately, for whatever positivity you can give to others, you can do for yourself.

Those with a birthday on March 25 are best suited for the corporate world. I say this with a little bit of caution.

While Aries people born on March 25 tend to start their corporate careers like a rocket, they often fizzle out in the middle. They hit a wall or they step on the wrong toes and, ultimately, they crash and burn.

This happens predictably, but I still recommend that you go into the corporate world.

Why? You will learn some key lessons that you need to understand for you to finally achieve the personal breakthrough you need for real success.

You are very headstrong. You feel that once you have determined the path to go forward, there is really nothing stopping you.

For the most part, you are right because you are a driven, passionate and ambitious person.

You will learn whatever it takes, and do whatever takes, for however long it takes to achieve your objectives.

Sounds good so far, right? But the problems is, you’re also very prideful and you’d rather fail on your own terms rather than lower yourself to accept somebody else’s leadership.

In many cases, your fierce independence can prove to be your undoing.

Positive Traits of the March 25 Zodiac

You are a very positive person. You tend to bring out the best in people as far as optimism and a sense of possibility are concerned.

The best part of all of this is that it’s very infectious. People can easily feel that things are not as bad when you’re around.

They feel a tremendous hope because if you can continue doing what you’re doing even with minimal results, they can do the same.

The sad part of all of this is while you are very inspiring to others, they often end up achieving more than you do because they usually don’t suffer from the same internal problems as you do.

Negative Traits of the March 25 Zodiac

Let’s get one thing clear here. For Aries people born on March 25, the only person that’s truly holding them back from the highest pinnacles of success is themselves.

They are too prideful and are often too set in their ways to listen to proper advice.

While they make for great advisers to others and can definitely inspire others to greatness, they can’t do the same for themselves.

Why? They are close-minded.

You believe that listening to somebody else is an acceptance of your own weakness and you cannot be weak as far as your own view of yourself goes.

Accordingly, you often end up chasing your tail and spending most of your time doing things that really don’t matter all that much.

Fire cannot be intimidated, Fire is relentless, and Fire is very strong.

All these three aspects of Fire are present in your personality.

Mars is the ruling planet of the Aries personality.

Mars has many different aspects to it, but one particular quality of Mars is readily apparent in the typical March 25 Aries personality: stubbornness.

Mars is the ancient Greek god of war, and to succeed in war you have to hold your ground. While there is a proper way to do this, Aries people born on March 25 tend to overdo it.

You often hang on when you shouldn’t be hanging on. You are often strong when a little bit of weakness and open-mindedness could go a long way.

My Top Tips for Those with a March 25th Birthday

You should avoid being stubborn.

I know this is scary because this would have to involve you saying to yourself that you’re wrong.

But the more you admit your shortcomings and the more you feel them, the greater the opening in the door to better self-discovery and, ultimately, the right revelations.

The luckiest color for people born on the 25th of March is Dark Cyan.

This color has a lot of potential, but without the proper illumination, it remains fairly flat and ineffective.

The same could be said about the things that you do with your life.

There’s a romantic element, as well as an appreciation for love’s more carnal side, within every individual born on 25th March.

The combination of Aries and Pisces energies in these folks means that they love to love, and have plenty of amorous affection to give.

Yet they’re so quick to rush into these things! All too often, someone born on 25th March can’t help but let an attractive special someone turn their head, and leap in headfirst to make the romance happen.

Often, these same romances are built on physical impulses, not solid foundations.

It’s vital that someone born on this date is able to allow themselves time to breathe and weigh up the pros and cons of getting deeply involved with someone, as well as giving the relationship itself room to grow naturally and blossom all the brighter for it.

It’s difficult, as patience doesn’t always come easy to these people, and in the worst cases it can feel as though they’re being forced to deny the very essence of their nature.

It’s a tough lesson to learn, for sure – but the loving rewards make it well worth the time put in.

Final Thought for the March 25 Zodiac

If you really want to stop feeling stuck or frustrated with your life, learn to criticize yourself more.

Now, this doesn’t necessarily mean that you have to go around criticizing yourself to such an extent that you become your own worst critic.

Instead, allow yourself to be more open-minded regarding possible different judgments of what you’re doing.

In other words, seek to learn. There’s always a better way to achieve what you set out to achieve.