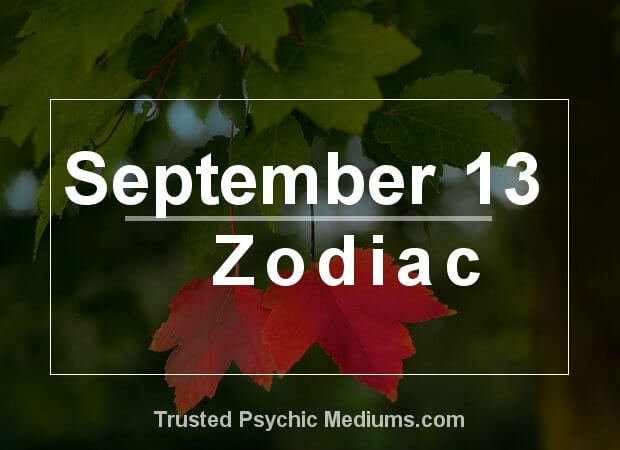 What is your Zodiac Sign if you were born on September 13?

If you’re born on September 13th, your zodiac sign is a Virgo.

As a Virgo person, you are a perfectionist. You have this idea in your head of how things should be. Well, everybody’s entitled to their own ideals, you take it several steps further.

Not only do you have a clear idea of how things should be, you also become easily upset about the fact that reality doesn’t match up to your ideals.

Instead of working with how things are, and then eventually pushing it to where you needed to go, you get upset. You throw a temper tantrum for the most part, and you refuse to participate.

As you can well imagine, this has quite a number of negative effects in all areas of your life.

Lovers born on September 13th are very intolerant of differences. Make no mistake about it, the reason why you’re even in a relationship is because you are a very charismatic person.

You have a way of turning your dogmatic, intolerant, and very simplistic view of things into a distinct charm. People know that there’s something wrong with it.

People know that that’s not the ideal, but they’re still drawn to you. That’s how appealing you are.

It helps, that you have a great sense of humor. It helps that you are very witty and intelligent.

When people look at the big package, they tend to overlook your flaws, and that’s where they make a big mistake.

It’s a big mistake on their part because you can make your emotional relationships hell.

The good news is, as you get older, and I’m talking about in your 40’s, you mellow down, then you become more forgiving, accepting and tolerant of other views.

However, when you are younger, and in your most attractive peak, watch out, because you can emotionally crush people.

What’s really perverse about all of these is that, they keep coming back for the same sort of emotional abuse.

Those with a birthday on September 13 are best suited for careers involving patterns and templates.

As long as you’re dealing with an industry that involves set guidelines, patterns, regulations, you name it, you do really well. You’re not the type of person who deviates from some sort of plan.

In fact, you get really emotionally upset if you feel that you are not performing based on the guidelines that you feel you should be performing to.

You have to keep this in mind, because that’s how your mind is set up. That’s how you are put together. If you are able to stick within your parameters, you will do quite well.

You have an inborn sense of order. You believe that the most important thing in the world is order. You’re a big law and order person. You don’t like people who color outside the lines.

Positive Traits of the September 13 Zodiac

Since you tend to be very idealistic, as far as how the world should operate, you tend to be also very law-abiding. You don’t question something if it is the law.

As long as you are sure that what is expected from you is written down somewhere, you would be glad and happy to comply.

What makes this quite problematic is that this is not how most people behave. Most people tend to bend the rules here and there.

And that’s what really gets you good. You really get upset when people bend even the most innocuous rules. In your head, rules are rules. They should be followed.

Negative Traits of the September 13 Zodiac

You can be overly harsh and critical to the people who are nearest and dearest to you. That’s the big paradox with you.

You have it in you to praise, and be very tolerant of people that you admire from afar.

However, the moment they show a liking to you, or worse yet, they become part of your life, you can be very, very harsh to them.

What makes this really disturbing is that, you think deep down inside, that you are doing them a big favor by judging them, condemning them, and otherwise making them feel like garbage.

The particular aspect of earth that is most relevant to the September 13 Virgo, is earth’s tendency to swallow you up in the form of quicksand.

If you dig a ditch, and you put the right kind of material there, and enough water, you’re going to sink.

And the interesting thing is, that is how your personality operates to people who get really close to you. At arm’s length, you can be extremely charming.

You can be very supportive and even encouraging.

However, once people get drawn into your personal sphere, you can be very suffocating because all they feel is judgment, harshness, and negativity.

What makes this really problematic on the receiving end is that, they can’t get enough. It’s kind of perverse really.

It leads to all sorts of co-dependency. And I’m not just talking about love relationships. This can also involve your career.

The particular aspect of Mercury that is most relevant to your personality, is Mercury’s intense speed. You can turn on a dime.

Don’t fool yourself into thinking that you are a very stable person. You’re not.

If somebody just says the wrong thing, or something that you think is wrong, you go off on them, especially if you know they love and respect you.

You feel that when somebody accepts you and trusts you, they are essentially giving you permission to walk all over them. That is a flaw that you need to work on.

My Top Tips for Those with a September 13th Birthday

You should avoid one-sided relationships. Believe it or not, eventually, you will meet your match.

You may get so used to walking on people and treating them like emotional doormats that eventually you will meet somebody that will push you back.

And guess what, it’s not going to be very pleasant. So, do yourself a big favor and be more respectful and look for balance in your relationships.

The lucky color for those born under September 13th is represented by light pink. Pink is the color of health.

Pink is the ideal color for health. In other words, if you wanna be healthy, you want to be pink.

The interesting thing about light pink is that it can either be going towards the ideal level of pink, or it can be pink that is bleeding out.

The good news is that it is totally up to you how this plays out in your life.

Never, Ever Do This if Your Birthday is 13th September

Being born on 13th September as a Virgo, you’re someone who has a talent for analysing things.

However, it’s easy to fall into the trap of overthinking, and from there, to only spiral further into worrying and eventual despair.

It’s a slippery slope, because often it just feel as though you’re simply paying attention to the details – only to find yourself biting your fingernails over the possibilities that could go wrong shortly thereafter.

While considering outcomes is a smart thing to do, to give all your mental energy to worrying is not wise.

It eats up your mental resources and can leave you feeling strung out.

Wouldn’t it be more logical to conserve your energy for solving problems that arise unexpectedly and pre-empting those you know are possible, rather than imagining nightmare scenarios out of nowhere?

Final Thought for the September 13 Zodiac

You have to be more charitable with people. I know that’s easier said than done. You also are more than welcome to point out the hypocrisies of many people who say that, but that is the truth.

By being more charitable, forgiving, and tolerant, you just make it easier on yourself.

Otherwise, you may develop certain habits that are going to be so hard to shake off, that eventually you end up alone. It’s not a question of if, but when.