Five of Cups Tarot Card and its Meaning 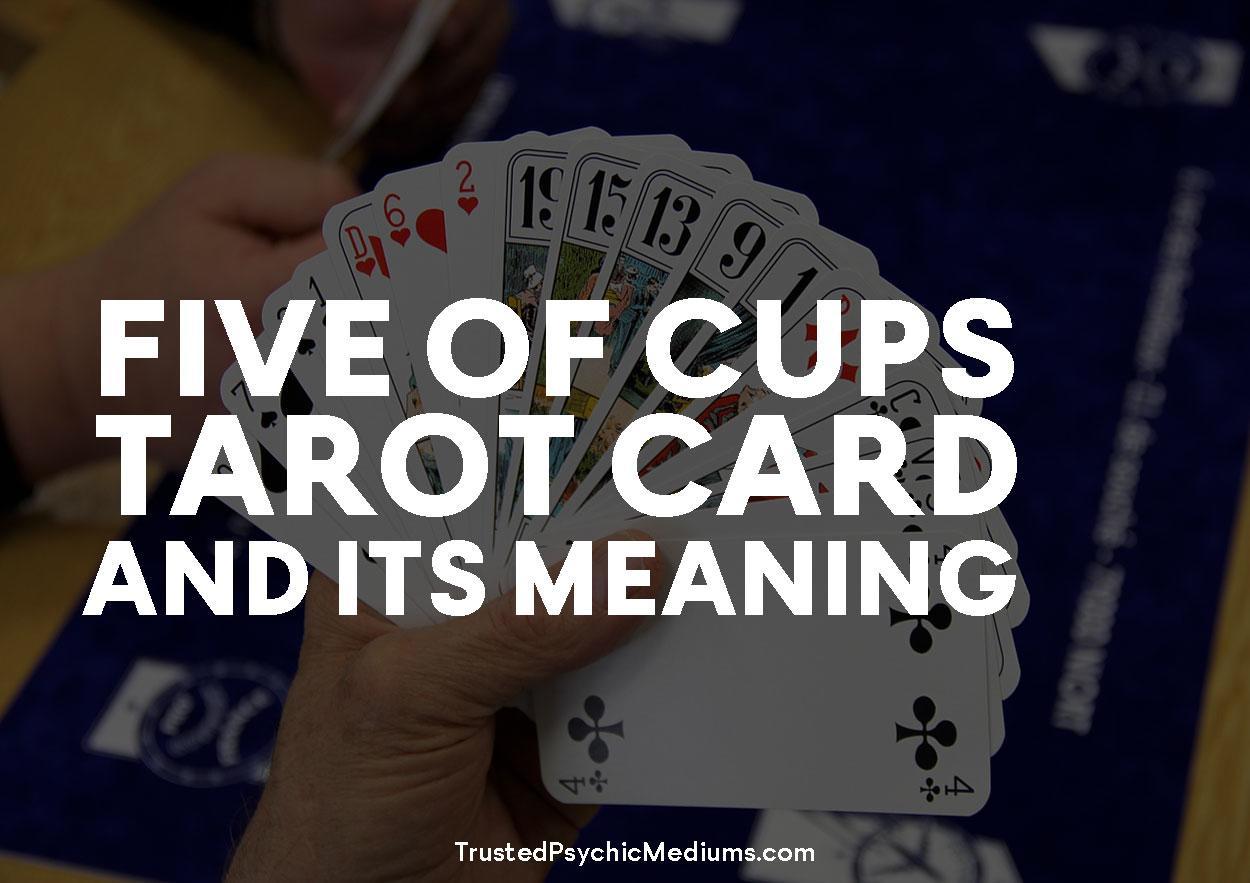 The Five of Cups is a card that indicates loss, despair, regret, and disappointment. It’s a card that signifies dealing with loss and difficulty, as similar to the Five of Pentacles.

The Five of Cups tarot card shows a cloaked figure standing under an empty sky on a desolate landscape. The figure is turned away, hiding its face, but a part of its face is exposed, although not exposed enough to reveal any features.

To the figure’s left, a river runs. In the distance lies the outskirts of a town. There’s also a bridge that can take the figure across to the other side of the river.

The Five of Cups represents your difficulty in letting go of the mistakes of the past and learning from them. You are stuck and keep revisiting the past, causing you to miss new opportunities in the present.

The person hiding under the cloak can also indicate feelings of shame or guilt over a deceitful or unethical activity.

Memories continue to haunt you. Regret overwhelms you. Guilt floods you. It can be debilitating, but the Five of Cups wants you to know that there is a way out of it.

There is no way to change the past. It cannot be undone. But you can change the course of your life beginning today, so you can have a completely different future.

In the Five of Cups tarot card, not all of the cups lay strewn about. There are still two cups standing upright. You still have something left. Not all hope is gone.

The Five of Cups wants you to know that to get out of the dark and painful place, you must learn how to forgive, and stop living in the past, just like in the symbol of Six of Cups.

You must take all the lessons with you but never stay stuck in the regrets and mistakes of your past. Remember that everything that happens in your life happens for a reason. You may not understand it now, but it will be revealed to you at the right time.

Self-pity and regret don’t do anything to help. The Five of Cups is telling you to move on to a better and more positive mindset and start living the life that you should be living, .

Five of Cups Tarot and Love

When it comes to love and relationships, the Five of Cups indicates sorrow. It can be anything pertaining to the relationship, but almost always, what happens is that one, or both, have been deeply hurt.

You may have called it quits, or just about to start the messy process of breaking up.

He may have broken up with you and you never even saw it coming.

The Five of Cups in love is not a healthy sign, just like the Eight of Cups. It suggests that things are taking a turn for the worse. It may be a time to rethink the whole relationship and decide if it can still be saved.

It can be a time to assess yourself as a partner and whether the relationship is still one that brings out the best in you.

The relationship may be ending, but you don’t need to be. Remember that it’s not the end of the world. The pain will be unbelievable, yes. It will hurt like nothing you’ve imagined. But you can make it out of there.

You’re not the only person in the world who has experienced pain in love. Look at them. They are all still standing up and living their best life. You can do that, too!

Allow yourself some time to heal, and then learn from the entire experience. It ended because it just wasn’t meant to be. You are meant to be in someone else’s life, in a relationship that you really desire to be in.

Five of Cups Tarot and Money

When it comes to money and finances, the Five of Cups can signify some sort of financial loss.

It can be that you have loaned someone an amount of money and this person still has not paid you back, or it can be that a financial investment did not turn out as lucrative as you first thought.

Word of advice from the Five of Cups: make sure that legal matters are ready and organized in case some changes have to be made regarding your business.

Don’t worry too much about your finances. You’re not going bankrupt anytime soon. The best way to stop worrying about money is to be generous about it and share it with the people who need it.

You can opt to make a donation to a cause you believe in, or be the silent partner in a project that has the ability to change and improve people’s lives.

Five of Cups Tarot’s Meaning for the Future

A mistake that you will commit can lead you to a sorry situation. Proceed with caution. Think and rethink your situation.

Be prepared to do some major damage repair. Most importantly, be ready to forgive yourself.

The Five of Cups and its Meaning for Health

The Five of Cups is a minor arcana card that does provide you with an overwhelming sense of sadness and negative emotions and feelings when it is drawn in the upright position.

This is certainly not the kind of card that you want to draw in any sector of your life, so it does not bode well when it comes to your health and what the card may be trying to tell you.

The first thing to be aware of is that it can be representative of you being weighed down with what can only be described as emotional baggage.

This will have a negative effect on your mental well-being, and that is not exactly something that should then just be ignored as you try to move on with life.

There is also a real sense of depression and suffering from social phobia or even panic attacks.

The mind is certainly very troubled when this card is drawn that could lead to you further isolating yourself from others as you struggle to deal with it all.

However, this is certainly not the best course of action to take, and you need to take small steps in order to redress the balance.

If you then draw the Five of Cups in the reverse position, it can then mean that the future is going to be slightly brighter than it may have initially been, and that has to be a good thing on your part.

With this, it can represent the idea of you being more open to the idea of some kind of healing and a desire to let go of those old and past pains that are still afflicting you to such an extent that it is crippling your life.

With this position, it is telling you that you need to indulge in some positive energy healing as that can be holding you back and making it almost impossible for you to do the healing that you need from any illness either physical or mental.

There is a real need for you to let go of those negative emotions and the old hurts just to start on the path of healing because without that there is going to be absolutely nothing for you to grab hold of and see that things can be better.

Overall, the Five of Cups does paint a bleak picture when it comes to your health, but if you spend some time looking more closely at what it is trying to say, then perhaps the future is not as bad as you may have initially thought.

It does deal with depression and mental illness in general, so seeking help in those areas is clearly going to be a good idea as that is the key for progress according to this particular card.

So, if you do draw it, then the card is slightly better in the reverse position, but even with that, there will be a huge amount of work for you to do in order to progress in the ways that you would like.

My Final Thoughts on Five of Cups Tarot

No one wants to see the Five of Cups in a reading. Almost always, it is a dark omen. It foretells disappointment, hurt, and loss. No one wants a tough time, but it can’t be avoided, because that’s just the way how life works.

The key is to face it with optimism and courage, and to know that this too shall pass.