Four of Cups Tarot Card and its Meaning 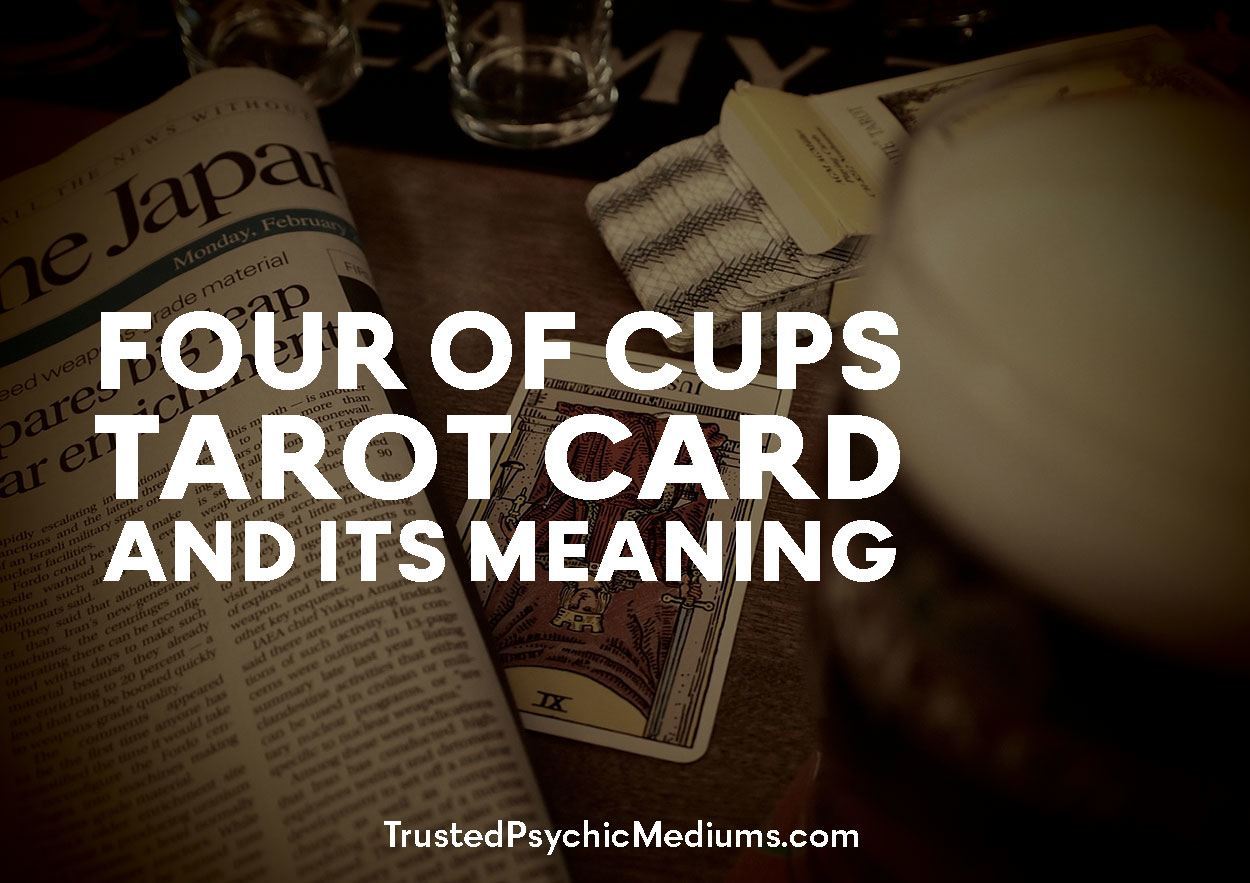 The Four of Cups is the tarot card that represents meditation, reevaluation, apathy, and contemplation.

The Four of Cups is depicted by a young man who seems to be contemplating and meditating under the shade of a tall tree.

He is so deep in concentration that he does not see the outstretched arm clutching a golden cup in front of him.

He also does not pay attention to the three other golden cups that stand before him a little distance away.

This signifies his desire to look deep inside himself and find the answers that he needs. The things around him are merely distractions.

The Four of Cups usually crops up when you are feeling boredom or dissatisfaction with your current situation, which is in contrast to the Nine of Cups wherein there is a deepening in relationships.

You may be feeling uninspired or unmotivated, and life has become a routine. The Four of Cups tells you to reexamine the situation and look within yourself to find a new meaning and perspective.

The Four of Cups also signifies that an offer has been put forth for you and you are delaying making a decision until you have had more time to ponder on it or to consider it.

Just like the young man in the card. He has not taken the cup, but he has not turned it down, either. A decision will only be made if the time is right, and after all the pros and cons have been weighed.

It can also signify disappointment over someone or over a certain situation. You may be dealing with the same thing for too long, so now, you just refuse to participate and withdraw to yourself.

The Four of Cups is the call to action that you need to get out of this slump.

The Four of Cups can be a stubborn and selfish card. Your self-imposed isolation can lead you to neglect other people’s needs. Stop ignoring the cup that’s being offered to you and start reconnecting with the rest of the world.

The Four of Cups wants to remind you to cherish life and not take it for granted. If you’re not careful, you can lose everything that you’re enjoying now. Know that you are blessed beyond measure.

Take stock of all the blessings you have and never again will you feel bored or disappointed.

Four of Cups Tarot and Love

What the Four of Cups in love represents is that too much of something can become dull and monotonous.

Even hot and passionate relationships can’t run on heat and passion for too long. Eventually, one, or both, will lose steam.

The Four of Cups can also symbolize that one has become harder to reach and has withdrawn from the relationship, as opposed to the Ten of Cups where there is emotional fulfillment. When once he was open and chatty, now he’s just cold and aloof. It can be depression, or it can just be indifference.

This can be a very stressful time for the relationship, and you have no idea how you can get through to him. No matter what you do, you can never seem to get him to engage.

It can’t be entirely your fault, though. Sometimes it’s just a personal issue that everyone needs to go through.

The Four of Cups can also signify a rocky relationship, just like the Five of Cups. No matter what you do to commit, he just won’t commit to you.

You have made him countless dinners, accompanied him to parties and events, showed him your best moves in bed, and even learned to love his dog when you’re allergic to them.

He has tons of excuses to not talk about it. You have plenty of options when it comes to your romantic affairs. But you choose to stay with this person and not explore what’s out there for you.

You know what makes a great relationship, but somehow you have chosen to ignore these when it comes to your own.

If that’s you sitting under the tree, you may be trying to sort out your feelings, or you may be feeling disappointed with the relationship.

You may be starting to have doubts but unsure about how to even start talking about it with your partner.

If you’re single, the Four of Cups wants to alert you to the potential of a new romance. That guy you always chat with at the mail room may be interested in you. You’re just too busy to notice.

You can be pining away for someone when the perfect guy can be starting right in front of you. So always be on the lookout for the real thing!

Four of Cups Tarot and Money

When it comes to money and finances, the Four of Cups wants you to set your goals and chart the steps you will take to be where you want to be. Do not compare what you have with what others have.

Instead, focus on what you have, and what you want to have. Don’t be so busy comparing that you miss the opportunities that can change your financial status.

Four of Cups Tarot’s Meaning for the Future

The Four of Cups wants you to know that there will be a long wait before you can realize your dreams and achieve your goals.

However, don’t be disheartened, and never lose sight of what’s waiting for you in the future.

For now, count your blessings and continue to work hard. Stick to your priorities and see them through.

Is the Four of Cups a Sign of Good Luck?

The Four of Cups is a minor arcana sign that is a sign of missed opportunities and suffering from real remorse when you have drawn this card in the upright position.

You can also suffer from depression, apathy and negativity surrounding your life, and this is hardly going to be the kind of card that is going to be the result of some good luck coming your way.

You will often feel depressed and bored with your life or even completely disillusioned with what is going on.

You will be of the opinion that things will be better on the other side, but that is not always going to be the case in the slightest.

There may be a sense of a lack of motivation in your life, and you may be of the opinion that you have missed out on the ability to change how things are going for you.

There may be an idea that you are regretting mistakes in previous relationships or even the one that you are currently in.

These regrets are going to be weighing you down and can be hindering your relationships at this moment in time.

You might even be complacent with what is going on, and this complacency is going to be evident also in your career sector as well.

It can also be the case that your health is suffering due to you not taking the correct decisions, but that is something that can be rectified if you are willing to do so.

If you draw the Four of Cups in reverse position, then things are certainly going to be looking better than you may have initially expected.

With this, there is every possibility that the card could then indicate that some good luck is going to be heading your way.

There is also the feeling that you are going to feel as if you are able to get out of the rut that you were in and the idea of apathy is about to pass which has to be a positive thing.

This applies to every sector of your life with the same positive aspect applying across the board.

Your career could be about to improve quite considerably and you could be changing what you are doing and can look forward to a brighter future.

You are making the correct decisions for your health and spiritual life with there being so much to be excited about.

Overall, the Four of Cups can be more of a sign of good luck if it is drawn in the reverse position but is still a negative if it is in the upright position instead.

In the latter, there is a real sense of depression over and above anything else, and this is something that you need to understand and to be willing to try to change as much as possible.

However, there is no real need for you to worry if things do appear to be going against you as there is the very real possibility of change just around the corner.

My Final Thoughts on Four of Cups Tarot

The Four of Cups is simply telling you to focus on right now and not on what could be. Be grateful for all the wonderful things happening in your life and don’t throw them all away in your pursuit of what you don’t have.

Instead, let the people you love know how much you appreciate and love them. Do it now while you still can, while they are still around to hear it. When you take your blessings for granted, the universe will not bless you with any more.

The Four of Cups warns you to stop filling your life with emptiness and dissatisfaction. The universe can tune in to your thoughts, so what you think about, the universe gives.

Focus instead on all the things going wonderfully for you and the universe will multiply that a hundredfold.

When it comes to the Four of Cups, the card wants you to take a long, hard look at yourself and how you view your life and love. Do you not see how blessed you are? Do you find it hard to accept the good things that you deserve?