Four of Pentacles Tarot Card and its Meaning 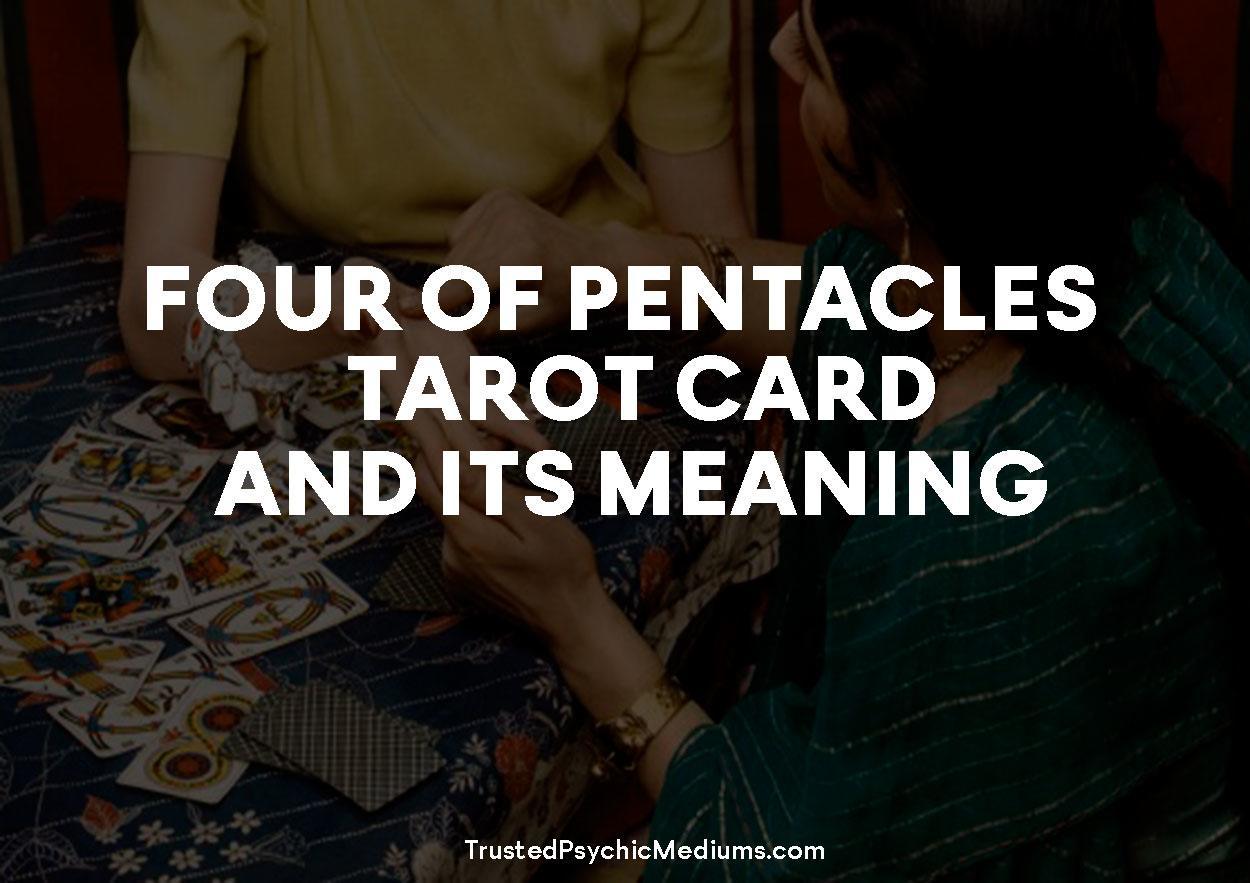 The Four of Pentacles is the card that signifies control and stability. It represents security and possession, as well as isolation, pride, immaturity, and insecurity.

The Four of Pentacles is depicted as a man who sits on a stool quite a distance away from the town. He is tightly holding on to the big golden pentacle in a defensive and protective posture, for fear of losing it.

A pentacle rests on his head, and another two lay upon his feet. He sits there, unmovable, to make sure no one touches his pentacles.

The Four of Pentacles is tied up or chained to his material possessions that he is unable to do anything else, unlike the King of Cups who can be very generous when it comes to this.

He looks spent and exhausted, but the small smile playing on his lips tell that he is quite pleased with his achievements.

Thus, the Four of Pentacles reflects both positive and negative connotations. It means that you work hard and you’re determined to achieve your goals, but there is also a tendency for you to value only the material or financial aspects of your hard work.

As a result, you become possessive and greedy.

But the Four of Pentacles also shows that you are financially secure, with a few solid investments here and there, unlike the Five of Pentacles who is striving in the financial aspect.

You always exercise good judgment when it comes to financial matters. You are conservative with your money.

You are protective of your assets, and you continuously work on growing your assets. You equate security and happiness with money.

Although the Four of Pentacles often signifies practicality and financial stability, this can also be seen as plain possessiveness and greed, as well as being too safe and too cautious with life.

You are too scared to take chances, which can result to an overall sense of unhappiness or feelings of dissatisfaction.

The Four of Pentacles signifies the risk and the perils of having too much wealth and success: valuing and prioritizing it too much.

You base your self-worth by how big your house is, how expensive your car is, and how many zeroes there are in your total net worth.

Other times, the Four of Pentacles also indicates a stubborn attitude that does not welcome change. You perceive change as a threat to your established way of living.

You cannot balance and adapt, like the Two of Pentacles. You’d much rather stay the same and stick to the formula than change anything or start taking risks.

Four of Pentacles Tarot and Love

When the Four of Pentacles appears in your reading that relates to love and romance, it simply means that you are clinging onto something you think is important or valuable.

You may be getting a little too possessive or clingy, or your partner is.

But other than this, the Four of Pentacles represents a smooth sailing relationship. It has the things that make a successful relationship, like love, communication, security, and understanding. But of course, it’s far from perfect.

In the reversed position, the Four of Pentacles is not good news. It signifies disagreements between lovers, and the loss of control.

Resentments start making their way to the surface, and the peace and harmony are slowing fading away.

If these problems are not addressed, there is no other option but to break up.

The Four of Pentacles signifies fear in love. Fear of showing how much you love them. Fear of losing them. Fear of speaking up and rocking the boat. Fear of embarrassing yourself. Fear of failing the person that you love.

Fear that limits you instead of letting you grow.

If your relationship is built on fear, you cannot really expect the relationship to last. Love is about being courageous and being comfortable in your own skin.

Love is about freedom and keeping your own sense of self, even if in a committed relationship with someone.

If you cannot be this in your relationship, it’s time to rethink the entire relationship.

Four of Pentacles Tarot and Money

When it comes to money and wealth, the Four of Pentacles indicates that you have worries over money, or you are trying to hold on to every single penny.

You spend a great deal doing mental accounting of your money, and you take extra pains to see where your money goes.

It’s fine to track your money flow on a regular basis, but being obsessed about every single penny spent is a completely different thing.

Why not share and donate to the less fortunate? Give a little, and witness how your money can change the life of one person. This will provide you with the shift in perspective that you need.

Four of Pentacles Tarot’s Meaning for the Future

The future position is the best position for the Four of Pentacles to appear.

This actually serves as a warning that your current interests can possibly end up limiting you instead of opening you up to new opportunities and new experiences.

It’s not a completely unchangeable card. You still have the opportunity to change your overall attitude about life. So act now and you will not experience a day of regret in the future.

Is the Four of Pentacles a Sign of Bad Luck?

The Four of Pentacles is a minor arcana card which, when drawn in the upright position, can reflect a number of negative thoughts, emotions and actions that could be hampering your ability to live a normal and happy life.

There is also the sense that you are holding onto things from the past that you need to work at letting go of, or it will make it impossible for you to go ahead and make the progress that you were hoping for.

Furthermore, you could be guilty of blocking attempts to move forward as well as a sense of being greedy or even penny-pinching wherever possible.

There is certainly a substantial amount of negativity surrounding the Four of Pentacles when it is drawn in the upright position.

Also, if you draw this card in the relationships sector, then it may very well signify some bad luck coming your way. It should certainly be viewed as a bad omen at the very least.

There will be negative aspects to your relationship and various difficulties that need to be faced up to, and the future is certainly not looking that rosy.

In addition, your work and money situation is going to often be viewed as being in a poor state of affairs where a great deal of work has to be done to stop things from worsening.

On the plus side, it can indicate that things are quite stable in this area but you need to be very alert to everything that is going on.

Overall, the Four of Pentacles in the upright position is going to bring with it a sense of difficulty and stress which could ultimately turn into you feeling as if you have encountered a significant run of bad luck.

However, if you draw the card in the reverse position, then life may be a bit better than you had perhaps initially expected.

With this, it can point to you being ready to jettison some of the things from the past and to let go of the old thoughts and ideas that have been holding you back.

This should lead to a sense of excitement rather than anything else, and it is clearly not going to be connected to the idea of running into bad luck thanks to drawing this card.

This positivity applies in each life sector. Your relationships can have a brighter future and that you are ready to finally let go of the fear that was holding you back.

This concept of fear also applies to your career, and it is very clear that the Four of Pentacles in reverse just cannot be viewed as being a negative card or connected to bad luck in any way.

Overall, there is a sense of the Four of Pentacles potentially involving some bad luck, but only in the upright position.

Even then, it is not about to turn everything into an absolute disaster as that is not what it is all about. Instead, it is simply trying to shake you out of your old ways, which may very well be sound advice to listen to.

My Final Thoughts on Four of Pentacles Tarot

The key to the Four of Pentacles is to realize that clinginess, neediness, and over possessiveness do not mean security and stability.

Can you not function if you’re not in control? Has anybody ever told you that you’re a little too possessive? Are you trying to take control even if it means damaging your reputation?

Look to the Four of Pentacles that shows up in your reading. This will tell you that you are blocking the energy that will help remove your stress over whatever is stressing you.

The Four of Pentacles asks you: What are you withholding from the people you love? Why do you think you feel so dissatisfied or isolated? What do you need to change to allow the positive energy in?