Four of Swords Tarot Card and its Meaning 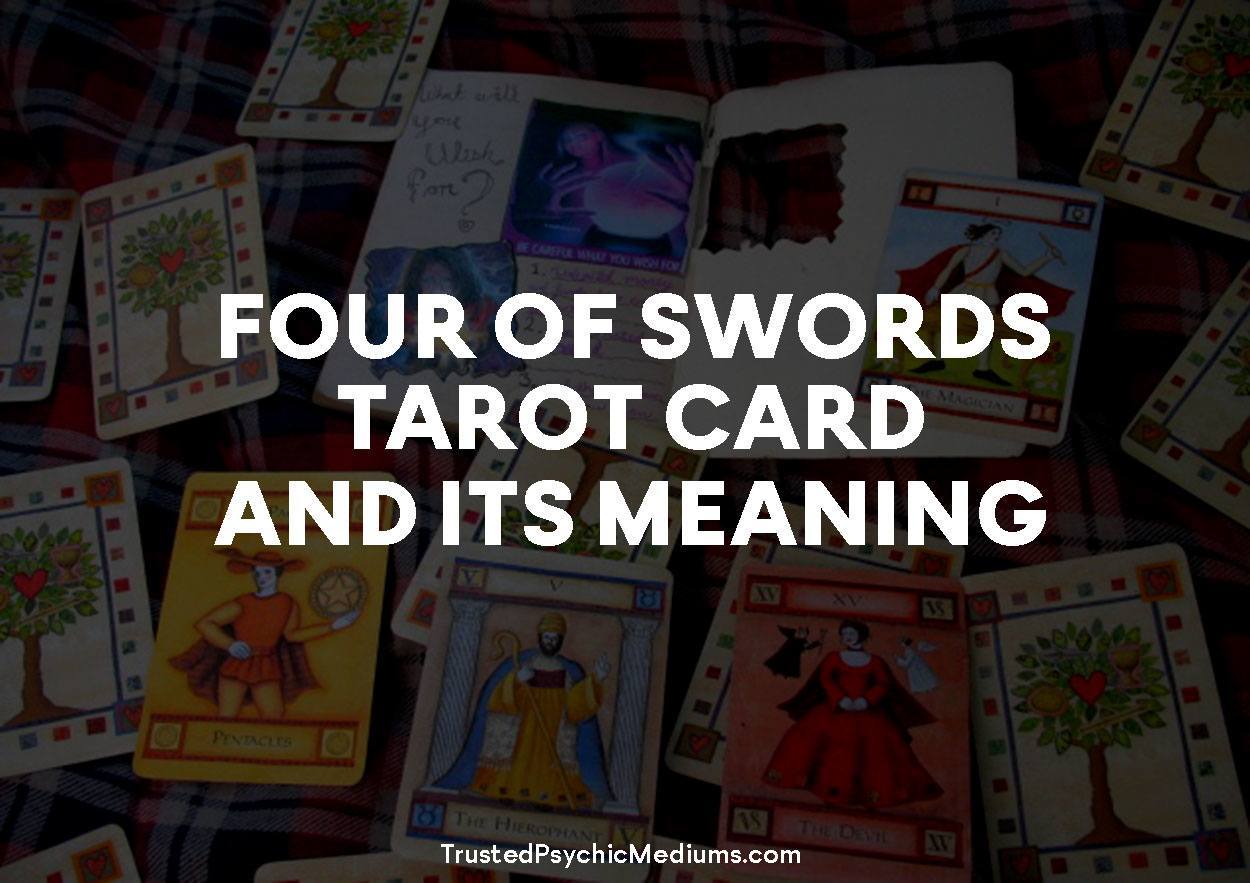 The Four of Swords tarot is the card for contemplation, meditation, and introspection, just like the Four of Cups.

It’s the card for rest, relaxation, and recuperation. It also symbolizes solitude, stillness, dreams, and perspectives.

It can signal mental exhaustion, or stress, or being overwhelmed.

The Four of Swords tarot is depicted as an effigy of a knight lying inside a tomb. His hands rest in a prayer position.

A sword rests right beneath him, symbolizing a major issue that threatens to overtake his life. Three more swords hang just above him.

The Four of Swords tarot signifies a period of rest and recuperation, just like the Ten of Cups itself, especially after a particularly challenging and difficult period. But after this welcome respite, you will come back to take on the challenge again.

You need a break to regain your mental power, so you have to be still and silent for a while.

When you experience constant stress and strain, even the strongest and toughest people will break down. You have to spend some time to relax and contemplate. Let your body and mind heal and be refreshed.

The Four of Swords tarot also signals a time when you can put your walls down to just take a breather. To call a truce, to collect your thoughts and gather your bearings.

It denotes a time when you need to recover from the trauma of loss or a breakup, from the stress of relationship or financial woes, or from the tension of health scares, just like the Five of Pentacles.

The Four of Swords tarot also represents the need for some time alone to properly address your situation, and to think clearly about your next step.

Take some time to pause and reflect about your current circumstances. Analyze and reevaluate your priorities. See which ones are promising and worked well for you in the past. Ditch the ones that have not.

Four of Swords Tarot and Love

When it comes to love and relationships, the Four of Swords tarot means that there is peace to be found in the midst of a struggle.

In a relationship, problems are bound to happen sooner or later. When things start to become unbearable, you and your partner may need to take a break from each other.

Sometimes, the Four of Swords tarot can also represent a man who has chosen to disengage from a bad relationship.

During arguments, he lets all things in one ear, out the other. He just can’t be bothered anymore, and he no longer cares what bad or demeaning things you have to say about him.

Instead of breaking it off, he stays in the relationship and tries to steer clear of the line of fire.

The Four of Swords tarot is a particularly positive card for people who just came from a breakup. It signifies a break from the hurt and the pain. Now is the time to start healing and feeling happy and positive about the future.

You have to take with you the good lessons from your past relationship, and leave the bad behind. Work on what you need to change so that your next relationship will not end up in the dumpster, too.

This is a good time to figure out who you are outside of this relationship and regain your individuality.

When the Four of Swords tarot is in the reversed position, it can mean that you and your partner are trying to resolve all your issues, but they just keep on piling up.

This can also signify that there will be more issues coming your way even after you have taken a break from the relationship.

If you’re single, the Four of Swords tarot tells you to look to yourself and determine what you want out of a romantic relationship.

You have been so busy dating and meeting new people all the time that you have lost the ability to connect with someone of real and lasting value. As a result, you feel empty and frustrated.

Spend some time by yourself and learn to enjoy being single. Before you can be truly happy with someone romantically, you have to learn how to be happy by yourself first.

Four of Swords and Money

When it comes to money and finance, the Four of Swords tarot shows that there is a need to take a break from all your financial worries.

This period of financial distress will not last, because you are more than capable of resolving all your problems.

You may have to consider taking a different approach.

Think out of the box and try to come up with different but doable ways to bring in extra income. If people owe you money, now is the time to collect what is due.

Take a breather from time to time. Stay away from overwhelming emotions that may cloud your judgment or blur your vision.

Four of Swords Tarot’s Meaning for the Future

When the Four of Swords tarot appears in the future position, this indicates a peaceful and quiet time ahead.

This can signify your kids leaving home for college. This can mean finding an assistant to handle the work at the office.

This can also mean purchasing a cottage in the woods to get away from hustle and the bustle of the city.

Look forward to peace and serenity in your world.

Is the Four of Swords a Sign of Bad Luck?

The Four of Swords is a minor arcana card that is perhaps not one of the best for you to draw should you be wanting a more positive side to your life.

Instead, this is a card that is often associated with issues such as anxiety, stress, and worrying excessively about pretty much everything, so that is not really going to lend itself to anything other than the potential for bad luck to come your way.

There is an overwhelming sense of this card indicating that you have allowed yourself to become overwrought with all of these negative thoughts and emotions, and that is going to wear you down quite considerably.

However, it can also point to there being some light at the end of this particular tunnel as it stresses that events may not actually be as difficult or tough as you may have initially thought.

Overall though, the upright position of the Four of Swords is not exactly something that you should be overjoyed about.

There is a real sense of nervous energy surrounding it, and that is not a nice place to be in. It warns you about getting some rest or your health could suffer.

It warns you about being caught up in the wrong things at work. It says that you are in a stressful and depressing situation regarding different relationships that exist in your life.

None of these things could be viewed in any kind of positive light.

Furthermore, this is a card where drawing it in reverse is going to be more positive for you as this indicates that you have come through this difficult period and that you may very well be about to emerge at the other side.

However, don’t be fooled as there is also the potential for it to be telling you that your stress and anxiety levels have reached such a height that you could very well be running towards a breakdown of some kind, which is certainly far from ideal.

When you look at the overall sense of what this card represents, then even although it does not specifically state that you are going to encounter a run of bad luck, the future is perhaps not looking as bright as you may have hoped it would be.

There is a real sense of doom and gloom surrounding this card with this potentially applying no matter if the card is in the upright position or in reverse.

So, the Four of Swords is not specifically a bad luck card, but it certainly points to you being in a certain frame of mind where you believe that everything is against you.

In other words, it would then be easy to perceive that you are encountering bad luck and that this card is simply some kind of confirmation of that fact.

However, look beyond that concept and see what is really going on because the chances are that it will then give you a completely different slant on things.

My Final Thoughts on Four of Swords Tarot

People in your life may be demanding too much of your time and attention. Don’t be afraid to say no and look after yourself first. Focus on what you need first.

Some things to reflect on when it comes to the Four of Swords tarot: Have you always been tired emotionally and physically?

At what point do you decide it’s time to take a break? What do you do to help yourself heal or recover?