Justice Tarot Card and its Meaning 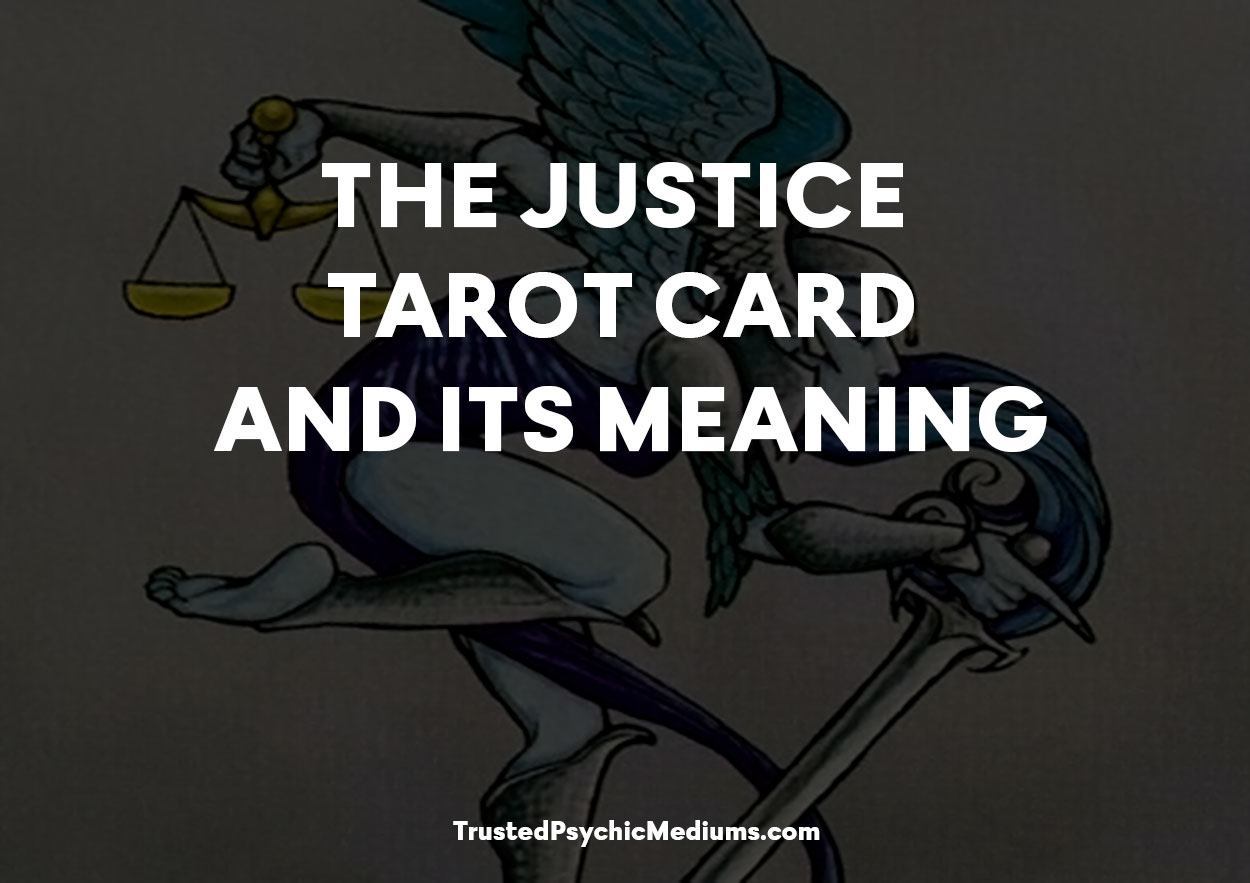 Justice is number 11 in the tarot card deck and is closely associated with the zodiac sign Libra. When Justice appears in a reading, people instantly think that there will be some cause for concern or legal problems in the horizon.

While this can be a possibility, you should know that Justice is also about decision making like the Fool, assuming responsibility, doing the right thing, and accepting consequences.

You can see Justice sitting on her chair, wearing a red cloak and holding the scales of justice in her left hand, and a double edged sword pointing upwards in her right hand, symbolizing impartiality and victory.

A square clasp holds Justice’s cloak together, which symbolizes the law that protects the circle. Her white shoe peeps from underneath her robe, representing that there are consequences for every action.

The cloth draped behind her represents kindness, while the pillars represent the constraints in this world.

The Justice tarot focuses on the law of cause and effect, and how karma works in a general and spiritual sense.

Everyone and everything are connected, and all the things that you are dealing with now are the result of your actions.

Whatever you put out there in the universe, you will earn a tenfold. Justice calls forth the need for some sense of balance, harmony, and fairness. Conduct your personal and professional affairs fairly and with integrity.

Treat yourself and those around with you with the same level of respect and virtue, and you will find that the universe will find a way to turn almost everything in your favor.

The focus of Justice is for you to reach your goals, settle disputes on matters related to law, money, investments, or health, and understand the laws of cause and effect and how destiny can figure in your life and relationships.

It often signifies legal matters of all kinds: lawsuits, contracts, marriage, divorce, financial or business arrangements, litigation, and how you should be prepared to deal with such eventualities. Know that justice will prevail one way or another.

When Justice turns up with reference to love and relationships, it indicates needs being met and justice being served to errant lovers.

If you feel like there’s more to your man’s being extra attentive to his smartphone, or his evasive answers, or his reluctance to post your holiday photos on Facebook, Justice will help you uncover everything that you need to uncover and help you come to a decision.

Same goes for you, if you haven’t exactly been Miss Goody Two Shoes. You know what they say about karma being a bitch? Oh honey, pray that you won’t ever have to find out.

If you want to know if you and your honey can make the test of time and stay together, most likely not. Especially with the amount of deceit and philandering going on.

If you’re a good girl, Justice will reward you with all the good things that you can only see in rom coms, and so much more. Kindness, faithfulness, and respect are rewarded.

You may not see or feel it now, but you will soon. If you’re looking for love, Justice will give you the man that you deserve.

When Justice appears in the context of finance or money, it is a good sign of money coming in, accounts being settled, problems being resolved, and loans being paid.

It can mean new business leads or new opportunities to make money. It can also indicate charity work or an act of compassion.

It can also signify lawsuits or litigations. You will feel the dent in your wallet and wonder where you’re going to get your next dollar.

But the world has a way of creating opportunities that will blow your mind. Change will come, like what it signifies in the Wheel of Fortune, but you have to wait for this particular cycle in your life to complete.

Justice Tarot’s Meaning for the Future

Justice in the future position indicates that all the things you are working for now are guiding you to a future where you have to make some really big decisions.

As much as you want things to remain where they are, they are all temporary. Justice wants you to know that you have to prepare yourself for change.

Is the Justice Tarot Card a Sign of Good Luck?

The Justice tarot card is a major arcana card that is linked to the idea of honesty, integrity and maintaining the law in general.

This is viewed as being a card that is representative of the more positive side of society, so in that respect you can perhaps begin to assume that it is indeed going to be a card that is linked to the concept of some good luck coming your way.

Furthermore, it also plays a role with the idea of cause and effect and entices you into looking at your current situations and trying to determine the role that your own thoughts or actions have played in getting you to this current stage.

When you then add in that it points towards any disputes, whether they be related to legal matters or not, being settled more in your favour, then you can see how this is a very positive card for you to draw.

This applies across the different sectors of your life from being able to work through issues in relationships to career based problems and so much more.

It also works strongly on the basis of karma, so if you have been positive and contributing in the past, then the future for you is indeed going to be looking relatively lucky.

If you do draw the Justice card in the reverse position, then you are looking at it perhaps not being quite so positive with a perceived sense of injustice rather than anything else.

It can also represent a lack of accountability as well as dishonesty, but at the same time there can also be the notion of unfairness.

When this happens, it is perhaps harder to see the Justice card as representing good luck when you are of the opinion that everything is going against you.

The reverse position does permeate every aspect of your life with a feeling of the world being against you.

It is as if nothing is capable of working out and you may then be paying the bad karma price for other things that you have been responsible for earlier in your life.

So, in order to determine as to whether or not the Justice card is a sign of good luck, then it all depends on whether it is drawn in the upright or reverse position.

You certainly want the former rather than the latter if that is the case as the card in the reverse position is attempting to tell you that there will be a few problems and issues coming your way.

The Justice card is certainly not something that you have to fear should it appear at any point, but if you believe that it will be capable of completely changing your life, then think again because that is not going to happen.

Yes, it can predict a brighter future without explicitly being connected to the concept of some good luck coming your way. However, just focus more intently on what the card is trying to tell you.

My Final Thoughts on Justice Tarot

Focus your attention on the present. Be in the moment. Take responsibility for your actions, thoughts, and decisions.

Always do the right thing and always be fair. Know that there are consequences for every action.

You may not see it happening today, but it will certainly happen to you sometime in the future. Whether you’ll be excited for it or whether you’ll be dreading it, that’s entirely up to you.

The Justice card symbolizes a time of decision-making, like the Hermit tarot card. Something that requires attention, intervention, or resolution in your life.

Look closely which cards are lying next to Justice to have an idea what you’re up against.

Search for answers and try to remain objective. Don’t be too quick to pass judgment. What is your gut telling you, and does it go against your conscience?

They only look half bad on TV, but never in real life. Plus the fact that you can never run away from karma. You can never hide from the clutches of justice.

Like that trippy 90’s song goes, ‘You only get what you give’. Justice plays no favorites. She is fair and demanding. So do what you can now to forgive the sins of the past and change the course of your future.

You have the power to change tomorrow today. Ask yourself this: Do you want to spend your life looking over your shoulder and wondering if someone is out to get you?

Do you want to sleep peacefully and not be woken up by bad dreams?