The Fool Tarot Card and its Meaning 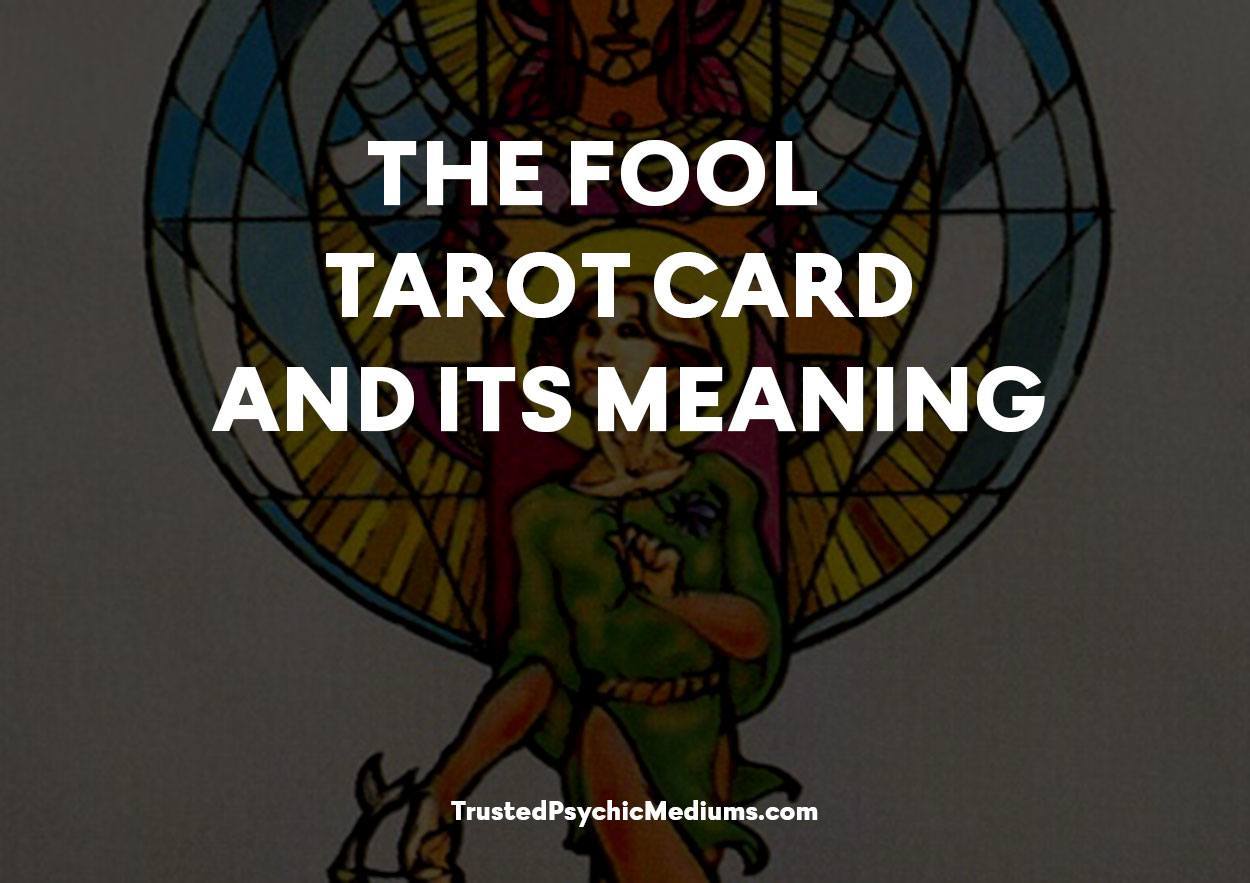 Don’t you just love fresh starts and brand new possibilities? Like moving into a new apartment, or paying off all your credit card debts, or starting a new job, or finally getting out of a stressful and unhealthy relationship?

Your whole body buzzes with excitement, and it feels like you cannot do anything wrong from this day forward. Just like the Fool on the Fool tarot card.

The Fool Tarot is quite a controversial card, owing to the fact that the rest of the cards in the tarot deck all follow the Roman numeral system.

Some translations on the Fool tarot have been negative, insisting that the card should have been named The Idiot instead.

But this just shows that the Fool tarot does not take crap from anybody, nor let any rule stop him from doing what he wants. Which is really not a bad thing.

The Fool tarot shows a happy traveler, exploring the world like the Page of Wands, in colorful clothes that will put the best hipster fashion to shame.

The Knight of Wands embodies the same characteristics as well. The Fool exudes the feeling of being light and carefree.

You see him walking under the golden sky and the big bright sun without a care in the world, with all his worldly belongings stuffed inside a makeshift bag tied to the end of a stick.

The road the Fool is walking looks treacherous and difficult.

But the Fool does not mind, and so does the dog who never leaves his side.

You might have been the Fool once or twice in your life (more if you have always been the wild child in the family), because the Fool tarot means being carefree, foolish, and optimistic.

It means feeling happiness and joy while letting go of fear and worry. It represents your important decisions and your journey to new beginnings, like the Page of Cups. It symbolizes simplicity, renewal, and movement.

The Fool Tarot and Love

When it comes to love, the Fool tarot means optimism and fun. The Fool easily attracts love. In fact, the Fool loves love just as much as he loves his freedom.

So don’t be surprised when one minute the relationship is hot and heavy, and the next minute calls are being ignored, messages are ‘seen’ but not replied to, and conversations are short and tense. The Fool is just impulsive and irresponsible like that.

You may also find this interesting:  The Wheel of Fortune Tarot Card and its Meaning

Things in the romance department can fizzle out faster than you can say “I really like you”, and the Fool can break your heart without even batting an eyelash.

Yes, even if you want to give him the benefit of the doubt, if you think something went down at the wedding he attended last weekend, something probably did.

He is easily manipulated and sweet-talked into doing something that he would not do otherwise. He’s easily influenced because he has no strong personality that he can actually boast of.

He can’t make up his mind, because he does not know what he wants in the first place.

And what he wants changes each time, depending on who he’s speaking to or who he’s with. Just like that, he can end things with you, and you won’t even see it coming.

The Fool is seldom not in a relationship, but always hightails it to the door when things start to get serious. But don’t feel bad. It’s just the way the Fool is built.

The Fool Tarot and Money

When it comes to money matters, the Fool tarot is a highly positive sign. Good news is expected, especially if you entered into some business venture.

The Fool tarot can mean a raise, or money flow to your business, or some risk finally paying off.

The Fool tarot can also mean an irresponsible financial mistake, like investing in the wrong kind of business, or losing money on a venture that turned out to be a scam.

It can also mean overspending money on wants instead of needs. (Yes, shoes and purses might sound like needs, but they truly are just wants.)

Overall, the Fool tarot in a spread is a good sign in terms of finances. A substantial increase in the current money flow can be expected, or you will come through unscathed from some kind of money trouble. Don’t worry.

In life, you win some and you lose some. If you work really hard and don’t rely on get-rich-quick schemes out there, money will never be a problem!

The Fool Tarot’s Meaning for the Future

In the future position, the Fool tarot can mean that new job you’ve been waiting for all year, or that new home you have purchased in the city, or that new romance that holds the promise of a wedding, or that new project that you’re finally able to begin.

The Fool tarot symbolizes your future life, and how much you will be enjoying it.

You may also find this interesting:  Page of Swords Tarot Card and its Meaning

The Fool tarot means having no idea what to do or where to go, but knowing that with this clean slate, life is all the more exciting and delightful!

Is the Fool Tarot Card a Sign of Good Luck?

The Fool is a major arcana card which can be quite deceptive if you allow yourself to be drawn into the belief that due to the name it must represent mistakes or misfortune coming your way.

However, when you draw the card in the upright position, what you are getting is something that actually represents the idea of new beginnings or that you are right on the cusp of something very exciting happening to you in your life.

This is something that is applied across each and every sector of your life, but there can be a sense that you are going to have to just take the occasional risk for you to really move on.

However, this is going to be something that you want to do simply because it will all be worth it in the end.

There is also the sense that everything is heightened somewhat, and that includes in your relationships where you could be completely swamped with love for another person.

Also, in your career, it can show that you are going to be quite happy with how things are going and excited about what the future holds.

If you go ahead and draw the Fool in reverse position, then it does not automatically mean that your good fortune is going to come to an end.

Instead, it can actually show that you are quite reluctant to take that step in order to move forward, and this is having a major negative impact on you.

Also, it is not going to mean that these new beginnings will not occur because they are going to happen, but you could be making the wrong decisions at the wrong time.

There is also a sense of you potentially being quite reckless when it comes to decisions and even how you are acting towards others.

This is something that has to change or it will lead to problems in not only your relationships but also your working life and even your health.

However, even with this apparent negativity it will still be the case that good things are going to happen just the road you are on will be slightly rougher.

You may also find this interesting:  Three of Pentacles Tarot Card and its Meaning

Also, in the reverse position, you need to be willing to perhaps just do more research before you go any further and not jump in without weighing things up first.

Overall, the idea of the Fool being a bad card to draw is just completely wrong.

Instead, it can easily be associated with the idea of some good luck coming your way as it does paint a picture of a brighter future than you ever thought possible.

Even in the reverse position it will be worth looking forward with a degree of happiness and excitement because something that is unstoppable is happening, but it is something that you are going to love.

So, if you draw this card, then good luck is going to be coming your way, so get used to that idea as quickly as possible.

My Final Thoughts on the Fool Tarot

The Fool tarot is not called the Fool for nothing.

Upon closer inspection, you will see that this carefree and easygoing stance may be because the Fool is too inexperienced to feel fear or worry.

More often than not, the Fool’s passion comes with recklessness.

The Fool does not make plans and does not worry himself with difficult situations that will arise in the future.

He is quick to take things at face value, which can prove to be harmful in the long run. However things may look tempting or appealing, it is best to exercise caution.

Also, the dog is not there just for cuteness sake. Without this trusty little dog, the Fool would have fallen over the cliff and no one would even mourn his death.

The dog symbolizes the friends and the family who look after your well-being and guide you to make the best decision.

It’s them who will get you out of that jam and steer you in the right direction when you got your blinders on.

So don’t feel bad or defensive when they bark your head off (dog, get it?), because they only want you to be careful, in case you fall down and end up looking like a fool. Pun intended.