Knight of Wands Tarot Card and its Meaning 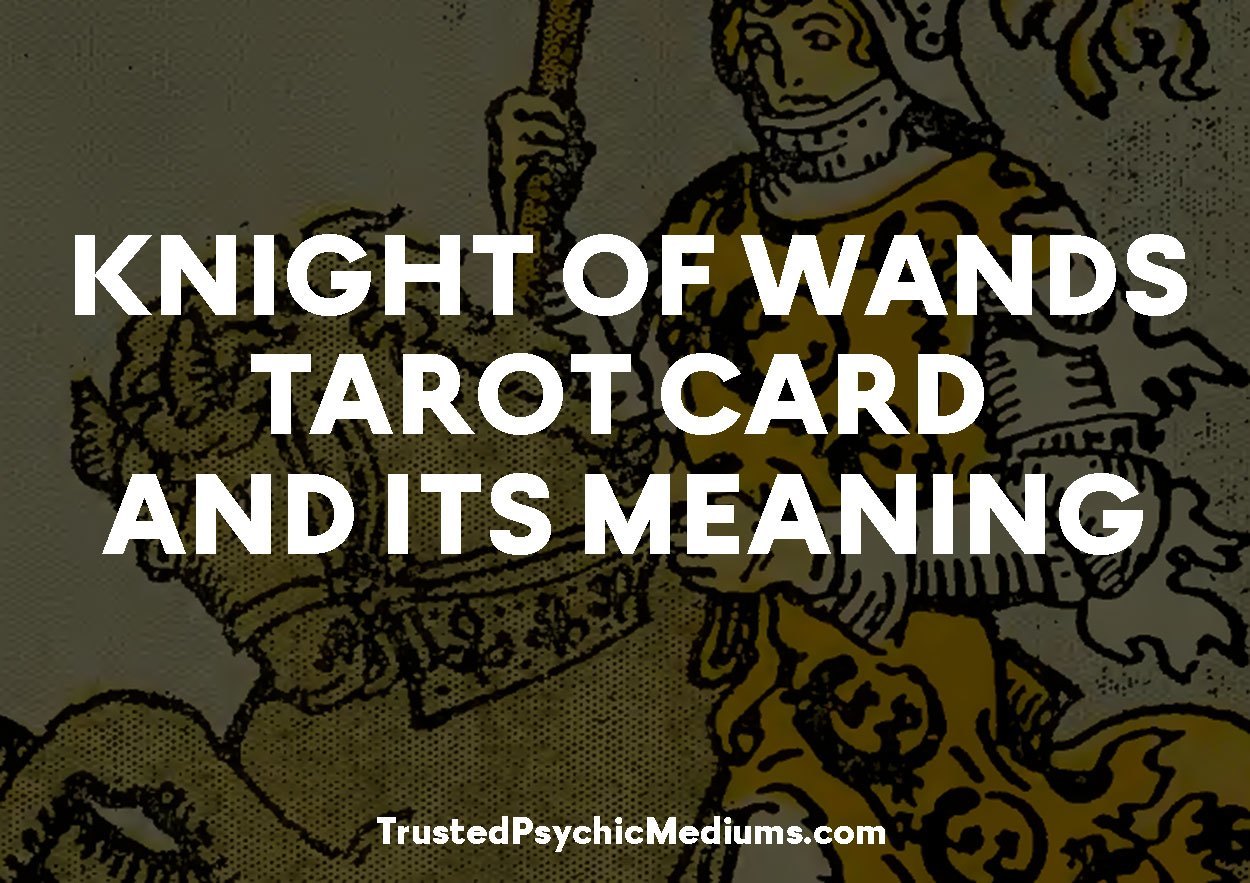 The Knight of Wands tarot is the card for energy, much like the Eight of Wands, action, and adventure. It symbolizes lust and passion, impulsiveness and boldness.

It’s about being wild and brash, energetic and exuberant. It means being high-spirited and determined.

The Knight of Wands tarot is depicted as a knight riding on his horse as it charges forward. The Knight of Wands is wearing a full armor suit. He also has a colorfully decorated shawl and a red plume on his helmet. He has a long wand in his right hand that he raises high above his head.

The Knight of Wands tarot denotes the actual pursuit of an idea, and it signifies that you possess the energy and the determinateion to see your ideas materialize. You are courageous and strong, just like the Queen of Wands. You will not back down, nor lose heart easily.

When the Knight of Wands tarot appears in your reading, it signifies that you are more of the ‘act now, think later’ kind of person. You are energetic and enthusiastic. You are excited and raring to go.

However, sometimes, this can be detrimental to you and your goals.

When you rush into things and make hasty decisions, it can negatively impact your goals and ambitions.

The Knight of Wands tarot wants you to begin projects with enthusiasm and power. But also remember that you need to have a realistic view, and more importantly, a well thought out plan.

You can’t run on pure energy and excitement alone. You need to channel this energy in the best and most appropriate way.

With the Knight of Wands tarot, expect something to happen in your life rapidly and unexpectedly.

The Knight of Wands tarot indicates spontaneity or swiftly changing positions. It signifies change that can be in the form of travel or a different environment. And yes, it will come quite unexpectedly, too!

Knight of Wands Tarot and Love

When it comes to love and relationships, the Knight of Wands tarot indicates that there is scattered energy in the air.

This card is about unexpected moments that rock your world and shake you at your core. They will not always be good moments, though. They can be also be unpleasant surprises that will deal you a strong blow.

In a love or relationship setting, this signifies a quick surprise that will not have any lasting effects on you or your partner.

You can find out all of a sudden that he can fart and burp at will, and you’ll be so disgusted, but this will actually endear him more to you.

You can uncover his secret love for the Kardashians or for trashy reality television shows. But you enjoy mindless TV shows from time to time, too, so that should be no problem.

You can realize that he cannot pronounce the word quinoa correctly and you wouldn’t even care.

There will be a strong reaction but the effects are inconsequential. They are not big enough or serious enough to be considered deal breakers. They become adorable quirks that make your partner unlike no one else.

The Knight of Wands tarot is not the most romantic card in the love position, and it says likewise to the King of Wands as well. In short, it’s fleeting, sudden, and unromantic.

He can come in your life unexpectedly, and then you share a brief but meaningful connection, and then he doesn’t Whatsapp back or answer his phone after. Shortest and most unromantic love story ever.

When the Knight of Wands tarot is placed in the reversed position, it indicates that there is a loss of vigor or power. The relationship is becoming too boring or predictable. Some of the qualities that made you proud of it in the past are gone now.

It can be caused by a lot of different reasons. Maybe it’s because of your low lovemaking drive? Maybe your crazy work schedule that leaves you exhausted and with no energy to do much else? Maybe your relationship feels too safe?

The reversed Knight of Wands tarot can also indicate a love interest that has no time for you. He’s so busy with other things that he has no time to spend even thinking about you.

Knight of Wands Tarot and Money

When it comes to the Knight of Wands tarot and money, this card wants you to know that your finances should be doing quite alright. You should have a stable and steady stream of money at the moment.

However, this doesn’t mean that you can spend it as you please. Think about the number of hours you had to work for every dollar that you spend. Money doesn’t grow on trees, so spend wisely.

Knight of Wands Tarot’s Meaning for the Future

When the Knight of Wands tarot appears in the future position, be ready for that flash of inspiration or that spark of genius.

You can also look forward to someone coming into your life who will fan that flame of desire. Someone who will sweep you off your feet with their charm, their looks, and their eloquence.

Be careful how you deal with them, though, for they can disappear in just a blink of an eye.

My Final Thoughts on Knight of Wands Tarot

With the Knight of Wands tarot, you should expect great and positive news that will be related to your passion or your career. It denotes that your projects and ventures will be more successful than what you anticipated or expected.

You have so many reasons and so many things to be proud of. You should always find the time to enjoy them and savor them.

Enjoy the ride and continue moving ahead even if there are blockages or hurdles on your path.

Be a trailblazer. Be a warrior. Be a rebel.

Rely on the confidence and the abilities that you possess to see your projects through. Listen to what your inner voice is telling you. Grab opportunities for you will never pass this same way again. Most of all, be grateful and never let success get to your head.