Queen of Wands Tarot Card and its Meaning 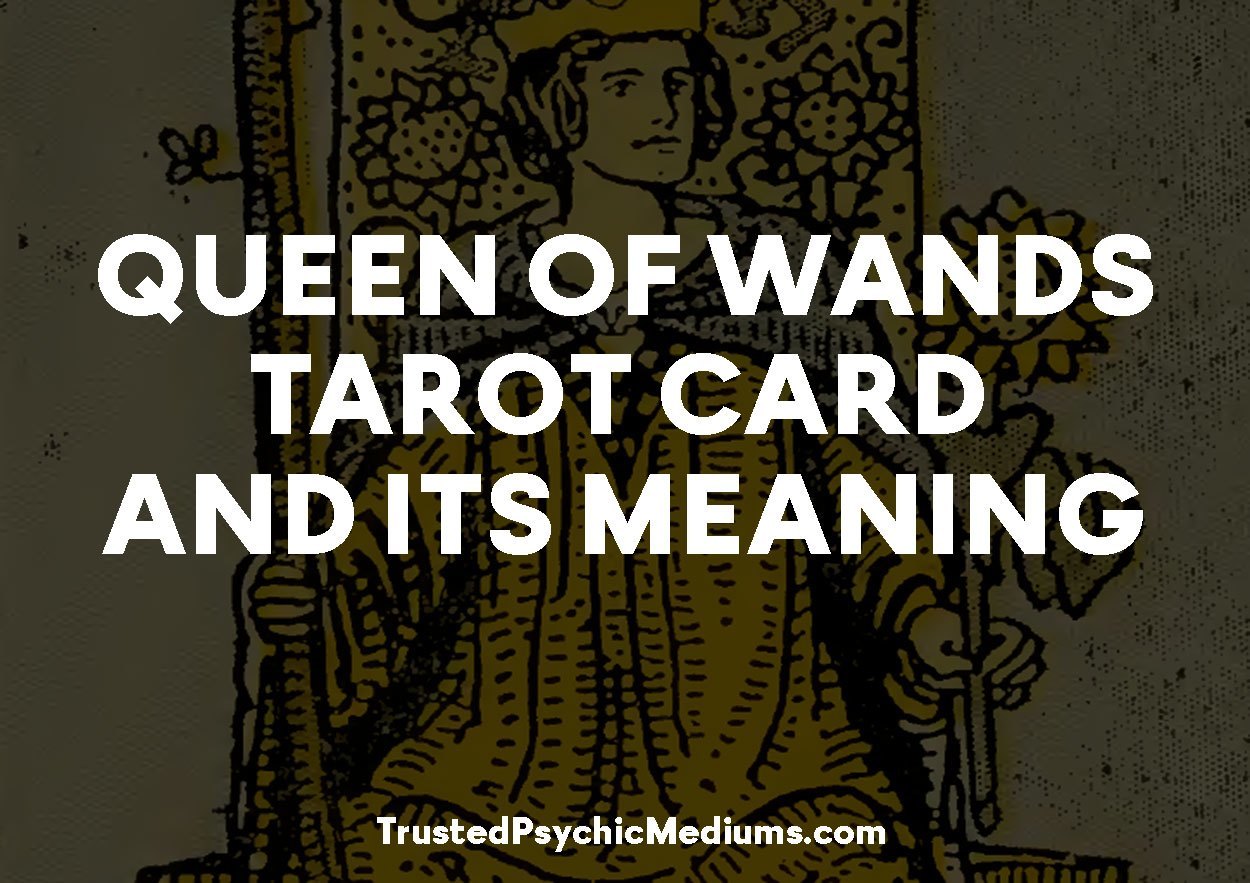 The Queen of Wands tarot is the card that represents warmth and comfort. It signifies truthfulness and generosity. It also indicates exuberance, determination, and vibrancy.

It means being kind, patient, faithful and nurturing. It also signals a time to be intuitive and well-liked.

The Queen of Wands is sitting on her throne while holding a long wooden wand in one hand, and a sunflower in the other.

These objects symbolize faithfulness, warmth, and nourishment, as well as fertility, life, and happiness.

The black cat that sits by the Queen’s feet represents her hidden dark side and her strong and independent nature.

On top of her throne, there are two lions etched on it, which symbolize the strength, just like the Knight of Swords, and the fire, just like the King of Wands, that the Queen possesses.

The Queen of Wands tarot represents strong feminine energy. She is fearless and will not walk away from any challenge.

She is a powerful leader who has a strong sense of focus to achieve all that she sets out to do.

Just like the Queen of Wands, you are strong, courageous, and independent. You can take care of yourself and you can make things happen. Even if the odds are against you and even if you have very limited resources.

You are relentless and talented. You are focused on your goals. But you still manage to be a well-liked, nice, and optimistic person.

The Queen of Wands tarot also indicates that you live a very busy and energetic life. Your energy is contagious and this is what makes you such an effective and natural leader.

You actively inspire other people with your actions and your confidence.

The Queen of Wands tarot asks you to be brave and bold in your endeavors. You know the path that you want to take, and you have never been so excited or optimistic.

The only downside to this tarot card is that the Queen of Wands can be stubborn at times, especially if you’re too focused on completing a goal.

You can still feel symptoms of burnout. You are not as invincible as you think.

Other times, you can also be a little overbearing, deceptive, irritable, or tyrannical. You are passionate, with a quick temper. When you get worked up, you can get really worked up!

Queen of Wands Tarot and Love

When it comes to love and relationships, the Queen of Wands tarot indicates that you are surrounded by a large amount of feminine energy.

It signals a time when you will enjoy attending parties and other fun social gatherings. You and your partner will look forward to celebrating with your friends and family.

The Queen of Wands tarot describes the general situation of your relationship, which is strong, colorful, and full of love. It’s not perfect. It’s not devoid of hardships and challenges. But it’s surviving and it’s thriving.

The Queen of Wands tarot can also reflect the personality of your love interest.

But in situations like this, you’ll be better off as friends. Because even if he is good-looking, intelligent, and all the good things that your mother told you to look for in a man, he will want to be the one in power and in control.

Like the Queen of Wands tarot, he wants to be the boss of you.

Don’t try to argue, because you won’t win. Once he has set his mind on something, that’s it. So think about it long and hard before you decide to commit to this guy. He may become too much to handle.

When the Queen of Wands tarot shows up in a love reading, it can also indicate what your man truly thinks of you.

He may think you’re beautiful and strong and one of the most admirable women he’s ever met. He may also think that you’re stubborn as a mule and not one to mess with when angry.

When the Queen of Wands tarot is reversed, it signifies that a line has been crossed. It can signify things spinning out of control. It can mean arguments and bullying, rudeness or aggression.

Queen of Wands Tarot and Money

When the Queen of Wands tarot appears in the money position, don’t be too excited or get carried away. Control your spending or you will end up regretting everything.

That doesn’t mean you’ll go broke or you will live in debt for the rest of your life after going on a shopping trip. It just means that if you’re not careful, you will easily lose what you have worked so hard for all these years.

Queen of Wands Tarot’s Meaning for the Future

When the Queen of Wands tarot appears in the future position, listen to the powerful female figures in your life. They will help you achieve your goals.

Your future home life will be one of peace and serenity. There’s no place for conflict or strife. You and your family will be perfectly content.

Is the Queen of Wands a Sign of Bad Luck?

If you have drawn the Queen of Wands, then knowing in advance if it is going to represent the possibility of some bad luck coming your way should really be the kind of information that you want to have at your disposal.

To better understand it, we need to look at the imagery on the card in order to provide us with an idea as to whether or not you should be worried about drawing this card.

When we do this, what we see is that she is sitting on a throne, but at her feet lies a black cat.

This is often regarded as being a bad omen and it can then represent the idea of some bad luck coming your way.

Initially, it does actually seem as if this is a card that you are not going to want to draw at any point in the proceedings.

However, one important point is that even though she can be linked to bad luck, it will often not be as bad as other potential situations or cards.

It is more in line with her having a dark side to herself over and above anything else.

The Queen of Wands is seen as being more of a warning card in connection to bad luck or something negative happening to you rather than just a straight out case of Lady Luck just simply not shining on you.

It is more representative of something bad potentially happening if you do not take her warning, which does show that she is not going to be as bad or dark as you may have initially feared.

Also, this is in connection more to the card appearing in reverse, and this is often something that people automatically believe is going to be bad.

However, that is not always the case and in this instance it is just this wake-up call that you either have an issue and need to deal with it, or there will be a problem further down the line that you are going to have to cope with.

Acting as a wake-up call, it does provide you with an opportunity to effectively change your ways before it is too late.

There is no way in which this card is designed to make you fearful or tell a tale of impending doom as that is really not going to be the case.

Overall, the Queen of Wands can have some negative connotations attributed to it, but that is not a reason to be sad or worried if you go ahead and draw this card at any point.

Instead, she is trying to give you a helping hand with various stages of your life and just making you aware of what is going on and how things may not be as rosy as they seem.

Also, just remember that a black cat has gone from being a good omen to a bad one and vice versa, so be aware that there could be some confusion.

My Final Thoughts on Queen of Wands Tarot

The Queen of Wands tarot can represent yourself or someone who has a lot of fire and energy in her. She can be a good friend who is steadfast and loyal.

She can be a boss whose leadership and focus you admire. She can be a public figure who has an admirable humanitarian spirit.

The Queen of Wands tarot is one of the most positive cards that you can get. It indicates that you will accomplish a lot of things, and impress a lot of people.

It signifies your ability to lead and inspire without forcing people.

It represents your natural gift to make people feel good about themselves and discover their own gifts.

It symbolizes how a sense of balance is needed in your life so that your spirit can grow and be nurtured.

The Queen of Wands tarot wants you to stop for a while and think about this: What gifts has the universe blessed you with?

Do you make good use of these gifts to make yourself grow and inspire change in others?