King of Wands Tarot Card and its Meaning 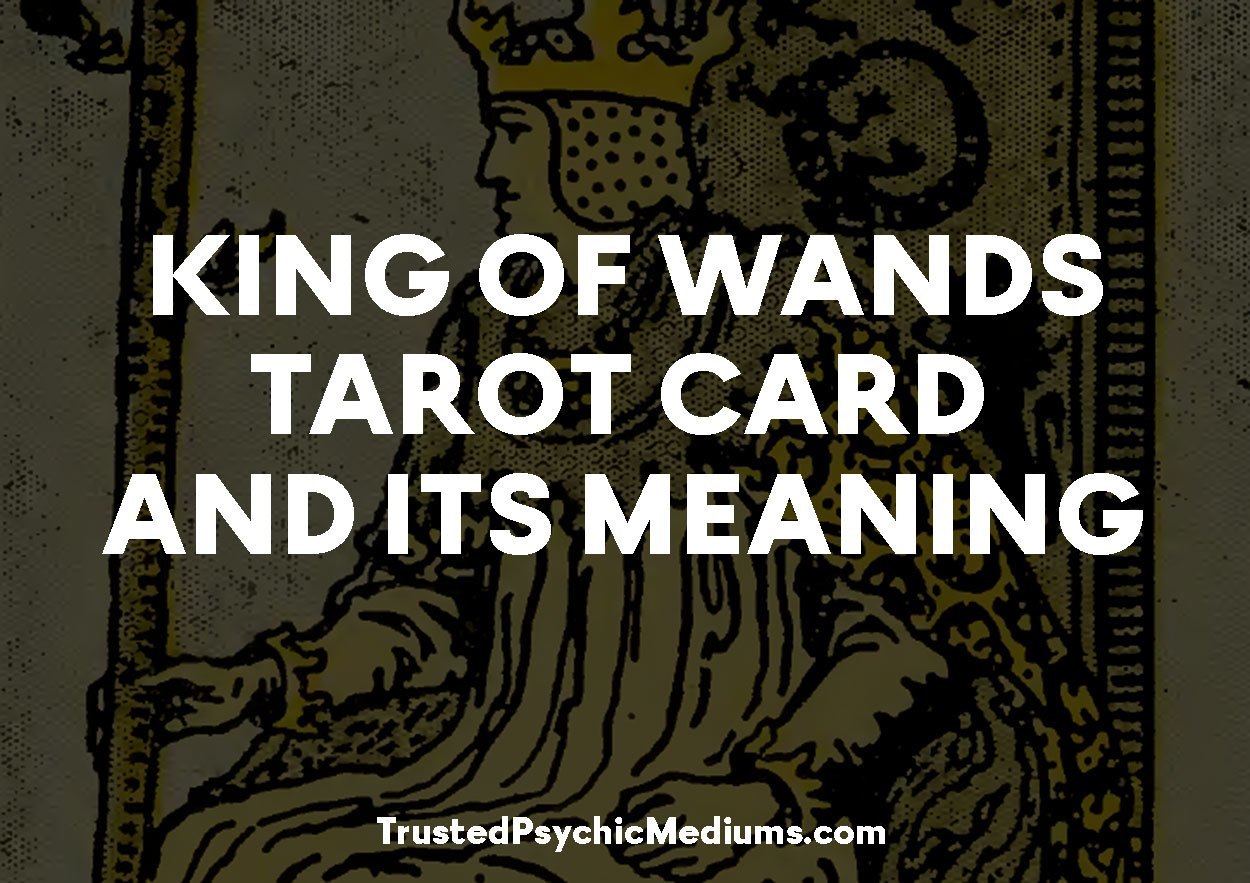 The King of Wands tarot is the card of vision, honor, and natural born leadership, like the Two of Wands.

It symbolizes the entrepreneurial spirit. It signifies honesty, creativity, integrity, trustworthiness, and compassion.

It’s about conscientiousness and harmony.

The King of Wands tarot is depicted as a king sitting on his throne while he holds a long wooden wand in his right hand.

He wears an intricately decorated cape around his shoulders. The throne upon which he sits is also decorated with images of salamanders and a lion.

His robe is a bright orange color, the color of fire. And the crown on his head is shaped like tongues of fire.

Once he sets his sights on a goal, he will do everything in his power to make it a reality.

People flock to the King of Wands because they know he is more than capable, and he can get things done. He can do it exceptionally well.

The King of Wands welcomes a challenge because he lives for the thrill of it. He craves for the adrenalin rush that comes with finding a solution to a difficult problem.

He is brave and inspires other people to be brave, too. He is not just lip service. When he says he will do something, rest assured that he will.

He respects people and is compassionate towards them. He knows how to empower and inspire, as well as bring out their best qualities.

The King of Wands tarot denotes that you are a person who has clear visions and solid goals. You are no time waster or drifter. You travel on your own path that will lead you straight to success.

When the King of Wands tarot appears in your reading, it wants to remind you that you should live your life with purpose, with vision, and with focus.

It signifies an opportunity that is being presented to you, something that you should definitely take without hesitation or doubt.

The King of Wands tarot can be arrogant or aggressive at times. He may be doing this consciously or unconsciously, but always because of his desire to achieve results and accomplish tasks. Never to belittle or to hurt anyone.

There can also be times when he will step on other people’s toes and offend some sensibilities in order to achieve his goal.

There will also be times when he will get so accustomed to the fame and the admiration of people. Arrogance and overconfidence can be a problem.

King of Wands Tarot and Love

When it comes to love and relationships, the King of Wands tarot signifies that you should focus on something that has great energy.

Just like the Knight of Wands, the King of Wands is another unromantic card. But because this card has a lot of energy working around it, this can signify that your partner is trying too hard to please you or satisfy your needs.

It denotes a time in your relationship when you and your partner are both trying very hard to please and delight one another.

If the King of Wands represents someone you like, you may have to put love on hold, because he’s still enjoying his time of exploration and adventure when it comes to love.

But he definitely is interested in you. Interested enough to check out your social media pages to find out more about you. For now, it’s just fun and games. Don’t expect anything too serious.

When the King of Wands tarot is placed in the reversed position, he can be a dangerous man. He will be full of cunning and controlled by his own agendas.

He will control you, make decisions for you, and basically just run your life.

It can also mean you and your lover are so focused on pleasing each other that you fail to pay attention to other aspects of your lives.

It can also signify mistakes committed as a result of your impatience and assertive behavior.

King of Wands Tarot and Money

When the King of Wands tarot appears in the money or wealth position, it is a positive omen.

You can discover a talent that you did not know you possessed, which could be an additional source of income. You can turn it into a business and earn from it.

Remember that you have to do a lot of work before you can even begin.

So do your homework. Study, research, and get advice from the more experienced ones. Dream big but match that with hard work. You can make amazing things with your life.

King of Wands Tarot’s Meaning for the Future

When the King of Wands tarot appears in the future position, it wants you to remember that all the struggles and hardships that you’re going through now will all be worth it.

Be thankful for these struggles, for you will never know the true meaning of strength and determination without them.

You’re so close to reaching the goal. Don’t stop now!

Is the King of Wands a Sign of Bad Luck?

Could the King of Wands card be viewed as being a sign of bad luck?

Well, when you look at what the card represents, it will then be up to you as to whether or not this translates into something that could then be viewed as being bad luck to you as an individual.

When you study the card and what it represents, then you see that it is related to positivity, energy, and being dynamic.

The King aspect brings with it a sense of being focused and determination all of which are clearly not symbols that you then associate with bad luck.

In actual fact, delve a bit deeper into what the card really means, and you will quickly discover that this is really a sign of good luck coming your way or, at the very least, your ability to avoid anything bad from happening to you.

The wands suit, in general, is going to be linked to our ability to adapt to situations and that we can be exceptionally creative as well.

The King of Wands just takes all of that to a whole new level, and it is seen as being a wonderful sign for the future no matter what your current predicament is like at this moment in time.

The card tells you that there is going to be a huge amount of energy coming your way and a boost to your confidence with the decisions that you are ultimately going to be making.

Omens are good, and there are just no real signs of any bad luck going to be coming your way any time soon.

In fact, there is not even a hint of there being any negative or bad in connection with you and with this card.

Often, a card being in reverse is going to signify some negativity, but not in this case.

In this instance, it means that the huge amount of energy is still going to be coming to you, but rather than it affecting you in a negative way, it just means you will find it easier to agree with things compared to before.

Also, it points to you being required to give some thought and weigh up your options before you go ahead and dive right into anything that is new to you.

This careful approach will certainly mean that you are less likely to run into problems or issues. Once again, it does reduce the chances of you encountering any part of bad luck no matter what you may be doing.

Overall, the King of Wands is not a card that is to be feared and nor is it one that you should feel disappointed in.

This card only brings with it a sense of positivity and good things happening to you now and in the future.

It should make you feel far more content with how your life is going, and excited as to what is just around the corner because the chances are that it is going to be something rather special.

My Final Thoughts on King of Wands Tarot

The King of Wands tarot is a good omen. It represents the men in your life who have positive influences on you, or who think highly of you and are supportive of you.

Keep your mind open to new ideas and new strategies to allow yourself to learn and grow. Don’t compromise your integrity. Lead with humility and live by certain code of honor.

Some questions to ponder on with the King of Wands tarot: Do you have integrity? Do you do things in honesty? How flexible are you to change? Do you lead by example? Will your future self be proud of you now?