Eight of Wands Tarot Card and its Meaning 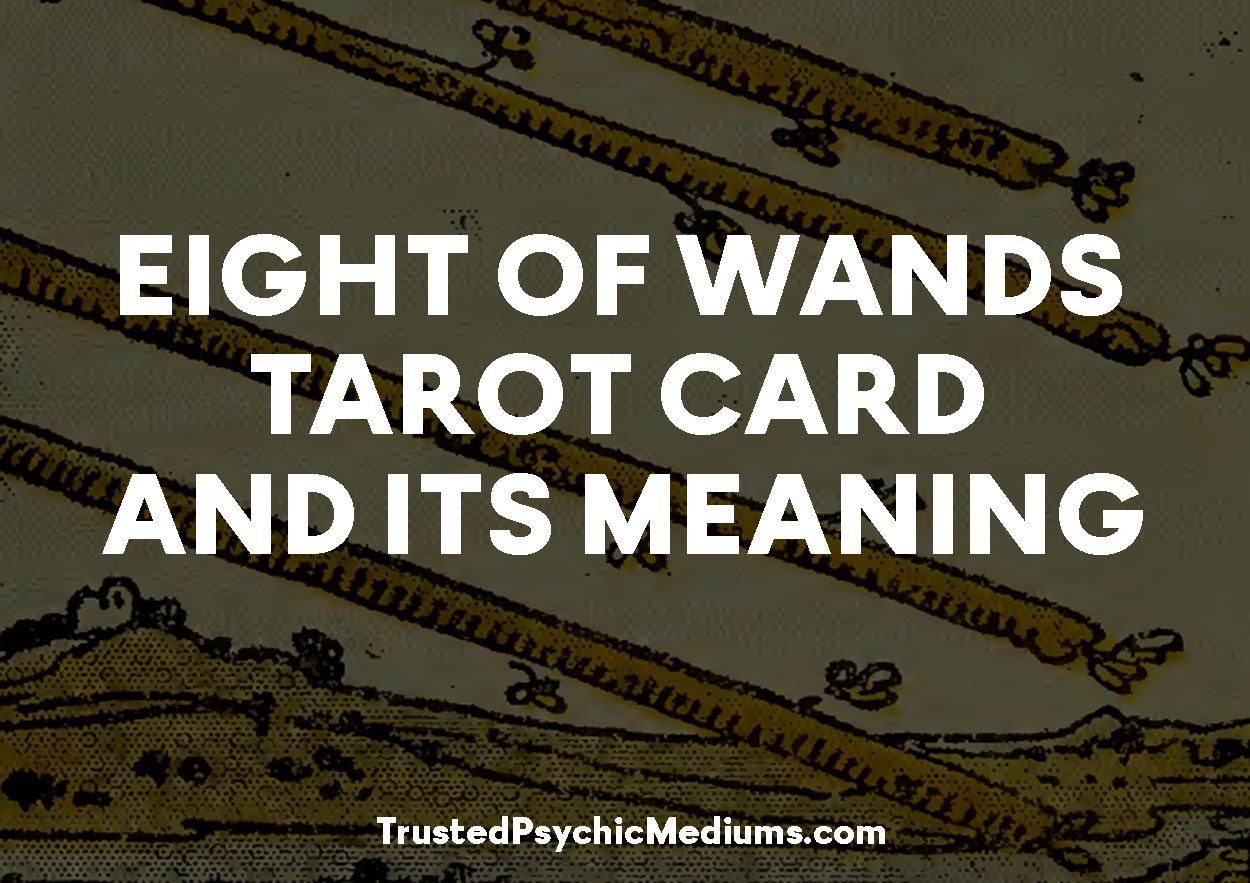 The Eight of Wands tarot is the card that indicates speed and movement. It signifies action and direction. It symbolizes going with the current or going back to basics.

The Eight of Wands tarot card is illustrated with eight long wooden wands hurtling through the air at great speed.

They look like they have traveled a great distance and finally will be able to land and rest. The sky is clear, and there is nothing blocking their way inland.

The Eight of Wands tarot indicates that the path is clear, and you can finally proceed with your plans. This is quite in contrast with the Eight of Cups.

You have the liberty and the space to carry on what you set out to do, and no one will stop you from doing exactly that.

The Eight of Wands tarot brings with it tons of energy and motion which drive you to achieve your goals sooner rather than later.

Expect to have a very hectic schedule from here on out. You will be enjoying immensely the busyness it brings.

You can expect projects that are already underway to be completed earlier than expected. You can also expect new projects to begin.

There will definitely be plenty of new opportunities in the offing, like the Three of Wands.

There’s no stopping your steady stream of bright ideas and endless supply of energy. You finish one project with such vitality so that you can move on and start with the next project.

The Eight of Wands tarot wants you to keep up this kind of electric energy, but choose the best opportunities that will carry you forward to your bigger goals. Also, don’t be in such a rush that you compromise quality or value.

The Eight of Wands tarot is the sign that tells you to strike while the iron is hot. Move quickly. Grab opportunities. Don’t wait around all day expecting something exciting to happen to your life.

You have to make it happen!

You’ll be delighted to know that the Eight of Wands tarot also symbolizes travel by air. Look forward to a short getaway, or a business meeting, or any opportunity for you to travel and experience a new place.

The only bad thing about the Eight of Wands tarot is that you can make some really bad decisions in your haste to get started.

You may also find this interesting:  Ace of Swords Tarot Card and its Meaning

The best thing to do here is to be quick and be swift but exercise good judgment and have a clear and solid plan.

Eight of Wands Tarot and Love

The Eight of Wands tarot in love and relationships indicates that there is a lot of good energy headed your way, unlike the Page of Wands.

The Eight of Wands tarot often signifies surprises in relationships. Something unexpected is coming. The only problem here is that it can be a good surprise or an unwelcome surprise.

The number eight usually signals a major transformation. With the Eight of Wands tarot, you can expect this surprise to turn your life around.

In addition, the Eight of Wands tarot denotes that you are giving away too much energy to your relationship. If you can give 100% of yourself, you will. It’s a very noble thing to. In love, you must give it all you’ve got.

But remember that your energy and your efforts must be appreciated and reciprocated. If you keep operating like this, you will run out of energy, and you will feel emotionally spent until you can no longer give anything more.

Make sure that your partner is also spending the same amount of energy on you and your relationship. Otherwise, your efforts are for naught. You can’t be the only one working to save the relationship.

When the Eight of Wands tarot is in the reversed position, it just means that you no longer have any interest in whatever unexpected is going to happen.

Rather than being caught unaware, you and your partner are taking matters into your own hands.

You are controlling the situation and softening the blow of whatever awaits in the future.

Eight of Wands and Money

When it comes to Eight of Wands tarot and your finances, it indicates that you will soon be receiving news about money or your personal finances.

It can be anything from a bank statement or a credit card bill, to something huge like winning in the lottery, receiving a large inheritance, or being selected to join a game show.

This card also signals the time for you to take a break and enjoy what money you have worked so hard for.

You work hard so that you will have money to spend on yourself and everything else that you may want. Take this opportunity to do just that.

You may also find this interesting:  Five of Pentacles Tarot Card and its Meaning

Eight of Wands Tarot’s Meaning for the Future

When the Eight of Wands tarot falls in the future position, it becomes a harbinger of opportunities. This card wants to assure you that great things are coming and you know just the way how to make them happen.

Stay positive and keep your energy up! Be open to gifts and blessings that are headed your way. Work and persevere, and the universe will reward you most generously.

Is the Eight of Wands a Sign of Bad Luck?

The Eight of Wands is also referred to as the ‘judgement of communication’ card so there is certainly going to be a significant amount of power attributed to it.

Ultimately, if the card was then seen as being a sign of bad luck, then this would not exactly be the kind of predicament that you would be wanting to find yourself in.

The card itself shows eight wands effectively pointing you in the direction in which you should head.

It can also be seen as representing a period of delays or problems having come to an end, and that is hardly going to then be representative of bad luck.

Also, it is often drawn when you have entered into a part of your life where you have perhaps come through a bad time and are able to now move onto something that is more productive and better for you. This is not the kind of card that then promotes the idea of bad luck.

In fact, to further counter the idea that the Eight of Wands is a sign of bad luck, you should know that the card is also aligned with Jupiter.

This is key as this planet is viewed in line with luck but only in the positive sense. So, if it aligns with this, then it makes a lot of sense that the card is not going to be a sign of bad luck in any way.

But then, we can take the next step and say that the Eight of Wands is directly related to a period of good fortune and luck being on your side.

It represents a path being effectively cleared for you that you may have previously believed to have been blocked. However, that is no longer the case if you have the confidence and desire to just step forward.

It should also be pointed out that there is still no sense of obstacles being in your way or anything to really impede you.

The concept of this being a bad luck card is still not exactly true even though it does not claim that everything will indeed be plain sailing from here on in.

If you see the card in reverse, then it still does not indicate bad luck in any way.

Instead, it is trying to tell you that there is no point in you holding onto the past as you are unable to change what happened before and that there is a real need to let go.

So, the Eight of Wands is pretty much as far removed from being a bad luck card as it is possible to be.

Instead, it is telling you the complete opposite and is likely to push you towards a much better future than you had perhaps felt was possible.

Also, just remember that this applies no matter the direction in which the card is facing or the part of your life that it has been drawn in because this is just going to spread good tidings over you everywhere that you look.

My Final Thoughts on Eight of Wands Tarot

With the Eight of Wands tarot, either things in your life are at a standstill, or they are moving at such rapid speeds that you just can’t keep up.

When it’s not meant to happen, it’s not going to happen. Don’t try to force things. Some things just take time. What you can do instead is grab opportunities that will help take you to your main goal.

The more opportunities you take, the more chances you have of winning the plum prize.

Some questions that the Eight of Wands tarot wants to ask you:

Are you going with the natural current of your life, or are you moving against it? Do you need a break from the busyness of your life? Do you have your priorities sorted out?