Three of Wands Tarot Card and its Meaning 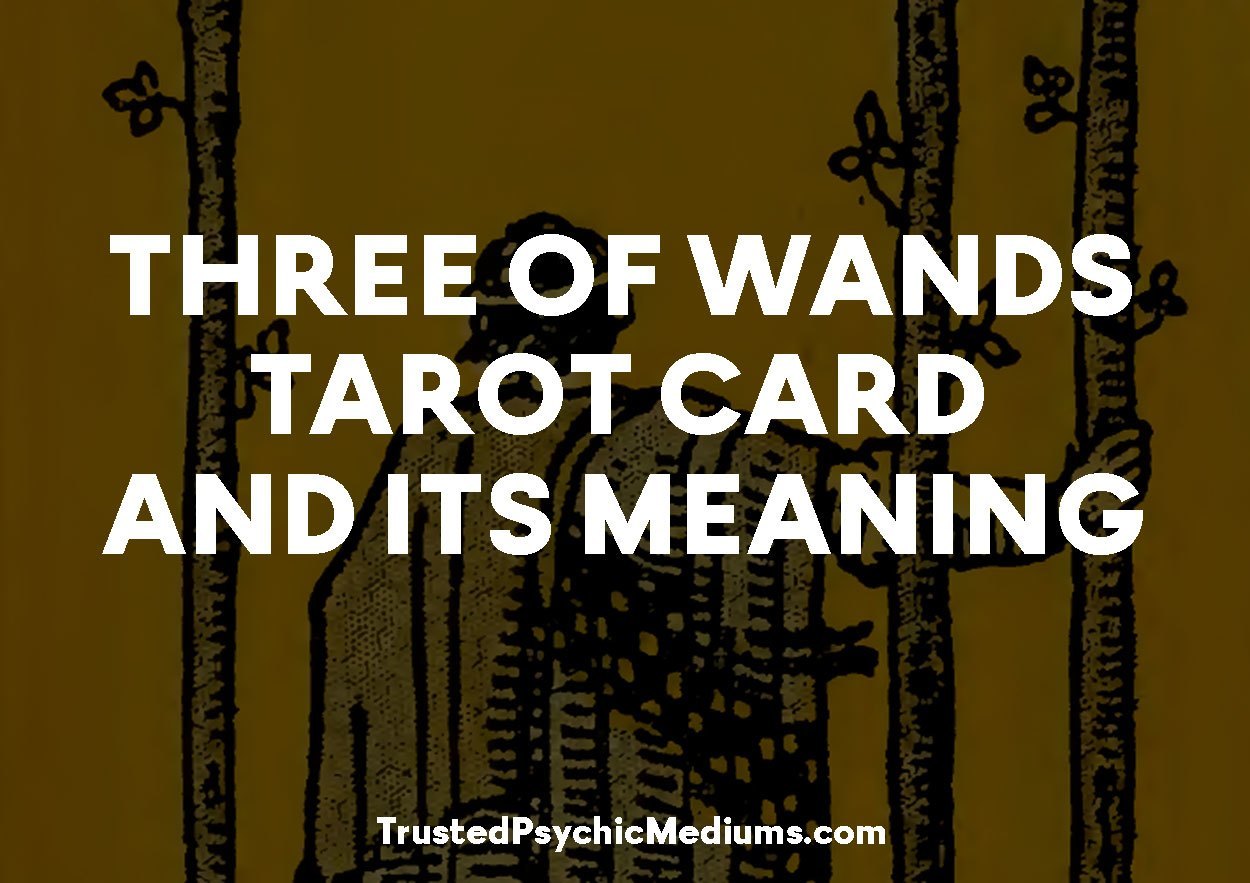 The Three of Wands tarot is the card for achievement and long term success. It signifies fresh starts and adventure.

It represents contemplation, insight, and perspective. This is somewhat similar with the Eight of Cups.

The Three of Wands tarot is depicted as a man standing on the edge of a cliff while he looks towards the distant horizon.

The man wears brightly colored robes and he is holding on to one of the three wooden rods propped up beside him.

In the distance, a few ships are making their way back to shore with the golden sky enveloping everything.

This symbolizes that what lies ahead of you are very clear, and you are aware of the challenges and the opportunities that wait for you.

Your feet are planted firmly on the ground, and you are committed to make all of your plans happen.

The Three of Wands tarot signifies that your plans are already in progress, just like the Eight of Wands.

You’re also considering finding more opportunities, bolstering your plans, and increasing your potential. Everything is going smoothly and as planned.

The Three of Wands tarot also represents opportunities to broaden your horizons. That can mean travel abroad, or an opportunity to study in a different country, or visit another place for business.

You have to open your eyes and see the hidden opportunities. There are so many out there that you cannot even imagine!

It’s time to be bold and think big. Take this chance to learn new things and new cultures. There are some things in life that you will only learn through travel and exploration, so learn as much as you can, while you can.

The Three of Wands tarot also symbolizes the challenges and the changes that come with exploring new territories and meeting new people from all walks of life.

Like the man in the tarot card, you look far ahead. Consider these as little bumps on the road that you will have to go through to get to your destination.

The Three of Wands tarot indicates accepting change and embracing commitment. It also signifies that you are in control over what happens in your life.

You must dream big and visualize the best things, the best possibilities, and the best outcomes.

Take that leap of faith and go where you have not yet gone before! Do the things you have always wanted to do, and find new things to accomplish.

Three of Wands Tarot and Love

When it comes to love and relationships, the Three of Wands tarot indicates that you’re still looking or waiting for things to happen.

You can be dating a new guy and you don’t know exactly how he’s wired. You’re still trying to figure out if he’s a morning person or a night person.

If he likes cats more than he likes dogs. If he likes adventure fantasies or crime thrillers.

You can also be in a committed relationship but he still has not hinted whether he wants to propose to you or not. Whether he even wants to be married and have kids.

You can be in a long-term relationship with someone and you don’t even know important details about his past relationships, or his own family, or even himself.

You can also be trying to get out of a relationship or breaking it off with someone, but you’re not sure how to do it, when you’re supposed to do it, or if you should even be doing it.

Manage your expectations from your partner and your relationship. Keep an open mind and look at things from different perspectives.

When the Three of Wands tarot is in the reversed position, it indicates that you are not putting in enough time or paying enough attention to your partner and your relationship.

Three of Wands Tarot and Money

The Three of Wands tarot indicates that things are going well when it comes to money and finance. All your hard work at the office or with your business are finally paying off!

But like the responsible and insightful person that you are, you don’t resort to becoming a one-day millionaire.

You spend wisely and you still save for the rainy days. You also don’t forget to share your blessings to others. That’s just one of the reasons why you continue to be so blessed.

Three of Wands Tarot’s Meaning for the Future

When it comes to the future, the Three of Wands tarot poses a challenge intellectually, and in order to come out of it victorious, you have to think out of the box.

You have to think inventively and creatively.

When this card appears in your reading, you must learn to cast your fears and doubts aside and avoid falling back to old habits.

You must trust in yourself and face the future courageously. Don’t compromise your beliefs and values. Know that things have a way of working out.

The Three of Wands and its Meaning for Health

If you draw the Three of Wands in connection with your health, then you should be extremely happy about the situation in general.

This is a card that is only going to bring good things to your health both as of right now as well as into the future.

This positivity is not restricted to simply the area of your health either, but that is the area that we shall focus on at this moment in time.

In general, the Three of Wands represents you having gotten to a point where you are almost at the end of something whether it be a project or an illness or anything else that has to go through a process.

It is about preparing in order to move onto the next step or part, so there is a real sense of excitement about it appearing.

For health, the card is viewed as being one of the strongest that you can draw in this instance.

It represents your health being better than you were perhaps aware, or could imagine, and it is certainly a rather good omen when it comes to the idea of you healing or recovering from any kind of health-related problem.

There is no sense of there being any dark clouds hanging over you with the Three of Wands.

But then, there is also a sense of warning surrounding the card which applies if you do not currently have any health concerns.

In this instance, it identifies that you were perhaps guilty of overlooking your own health or perhaps not going for that check-up that you had planned on going to.

In fact, you could have been taking things for granted when it comes to your health and this card is just a gentle reminder that this may not be the best way to proceed.

Also, with this card, the main focus for your health should be on your general circulation.

However, drawing it does not mean that you are going to develop issues, so there is no need to be stressed as a result of this.

Instead, it is just making a basic point to you instead of you perhaps overlooking a potential problem.

If you draw this card in reverse, then it still does not mean that you are going to be running into problems any time soon.

Instead, it is merely to act as a warning not to ignore things but there is still the promise that your health is going to be fine, or you are still coming to the end of whatever problem it is that you may have been having.

At this point, not being too complacent is perhaps the key.

What is clear is that this card is a wonderful card to draw in the area of your health, and it is difficult to imagine there being a better one.

It represents a more positive future for you, or signals that you are finally beating and overcoming a problem that you may have already had.

My Final Thoughts on Three of Wands Tarot

The Three of Wands tarot signifies work in a very healthy and helpful way. When you work, your efforts are appreciated, noticed, respected. Your results are always admirable and efficient. You always get the job done.

What the Three of Wands tarot wants to ask you is this: Can you see yourself making your dreams a reality?

What plans do you have in place to make this dream a reality? Are you allowing yourself to follow your dreams and your plans come to fruition?